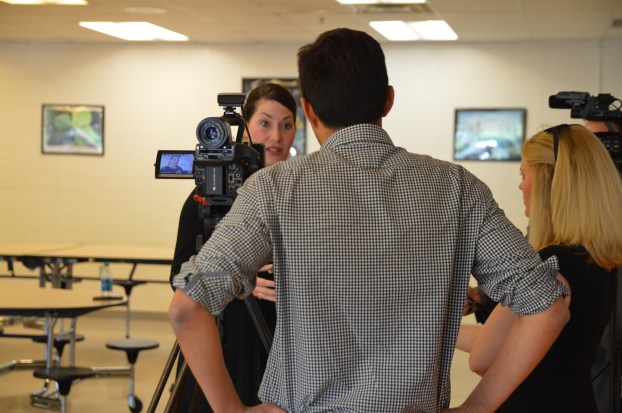 The day before her visit to Boyle County High, Secretary of State Alison Lundergan Grimes filed a lawsuit asking for a temporary and permanent injunction stopping House Bill 114, a new law which majorly scales back on Grimes’ authority over the State Board of Elections. Grimes and her attorney have said the law is a politically-motivated attack on her personally, calling it a partisan political effort.

The lawsuit coincides with a pending report, being conducted by independent counsel appointed by Attorney General Andy Beshear after allegations made against Grimes claimed her office over-extended its reach into voter roll information. An investigation is also being conducted by the AG into complaints of inappropriate contracts, and the Executive Branch Ethics Commission and the Personnel Board are each conducting investigations into different allegations against her office, including improper search of employees and applicants to find out political affiliation.

Grimes said exercising oversight in her role does not constitute overreach.

“The chief election official is supposed to ensure our elections are fair and honest and that there’s integrity in the process, and that’s what I’ve done for the past eight years,” Grimes said. “It’s not going to stop because the legislature wants to have the Republican party take over our entire election process.”

Grimes said she is hopeful that a court of law “will see not only the sloppy reckless nature with which this law was passed, but the harm that it is already doing to our election …”

House Bill 114 makes the secretary of state a non-voting member of the State Board of Elections, removing her as chairperson. The law now adds one Democrat and one Republican retired county clerks to the board, which is made up of six members appointed by the governor from lists supplied by the two parties.

Grimes maintains by changing her to a non-voting member, the board is left with an equal number of Democrats and Republicans as voting members.

It also limits the secretary of state’s access to the registered voter database.

The law was enacted as soon as it was signed last session by Gov. Matt Bevin because it carried an emergency clause.

The lawsuit says, “This structure appears designed to guarantee inevitable gridlock — and to unreasonably impede the ability of the Secretary of State and the State Board of Elections to administer free and fair elections and of the executive branch to otherwise enforce the Commonwealth’s election laws.”

Grimes calls it an unconstitutional infringement of her executive authority, and a violation of constitutional separation of powers, and that the elections board was unlawfully reassembled to an independent state agency.

She warned of the law’s effects on the May 21 primary election.

Grimes said this is “not the time for us to start testing some novel new concept for election administration here in the Commonwealth.”

Boyle County High School received an honor Wednesday morning, and it was hand-delivered by the secretary of state. Alison Lundergan... read more