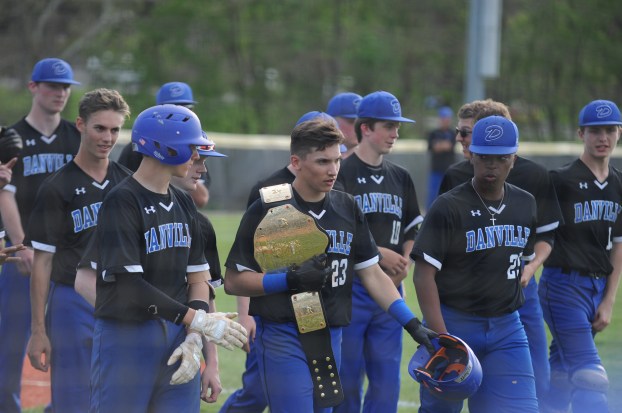 Danville's Preston Barnes celebrates a three-run home run with a heavyweight wrestling belt during a game against Garrard County April 23. Danville is the No. 1 seed in the 45th District baseball tournament, which will be held the weekend of May 18-19 in Lincoln County. (File photo by Matt Overing)

The schedule was announced Thursday for the 45th District baseball tournament, which will be played at Lincoln County.

The entire tournament will be played the weekend of May 18-19, with both semifinal games on Saturday afternoon and the championship on Sunday afternoon.

Danville is the No. 1 seed, followed in order by Boyle County, Lincoln County and Garrard County.

The 45th District softball tournament will be played the following two days, May 20-21, at Garrard County’s field, which is adjacent to Lancaster Elementary School.

The semifinals will be played on Monday night, with the championship on Tuesday night.

Boyle is the No. 1 seed, followed in order by Garrard, Lincoln and Danville.

Earlier this week, the KHSAA Board of Control approved a list of sites for semistate games June 1. Most games will take place on collegiate fields in compliance with a previous directive by the board to play the games at neutral sites if possible.

In softball, the champions of the 12th and 11th regions will face off at Berea College.

Here are the complete schedules for the 45th District baseball and softball tournaments:

By LARRY VAUGHT Contributing writer He’s always loved football and he certainly has loved being part of the University of... read more