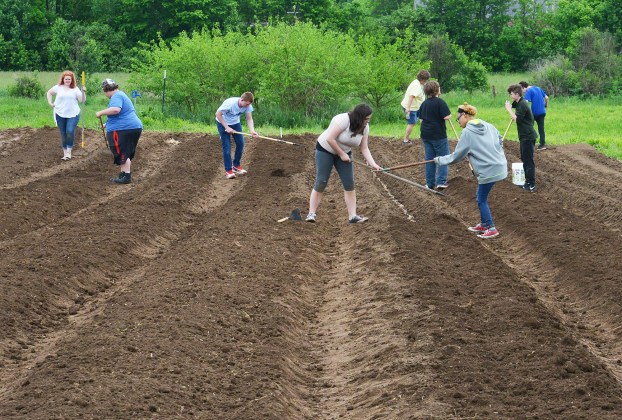 Potatoes should be plentiful on the Kentucky School for the Deaf campus when it’s time to harvest. On Thursday morning, several KSD agriculture students planted 200 pounds of Kennebec seed potatoes.

This year, they’re hoping for nearly 2,000 pounds of potatoes.

Trying to beat the predicted rainfall on Thursday, students furiously dropped the seed potatoes in straight lines, sprinkled on fertilizer and used hoes and rakes to cover the crop with the tilled, rich soil.

KSD senior Alexandra Shupe, who is the school’s FFA president, said through American Sign Language, it’s important for the organization to give back to the community so they’re planning on sharing the harvest with all the students. The cafeteria will also benefit from the students’ hard work, she said.

Shalissa Kayanna McGill, left, and Cylee Barfield work in unison to cover a row of seed potates that had just be planted.(Photo by Robin Hart)

Eric Gilbert carries a bucket of seed potatoes in one hand and fertilizer in the other. (Photo by Robin Hart)

Alexandra Shupe, a senior at Kentucky School for the Deaf smooths dirt over a row of seed potatoes that students had just planted Thursday morning. (Photo by Robin Hart)
You Might Like

Editor’s note: This is the final story in a series looking at the Boyle County School District’s needs survey and... read more