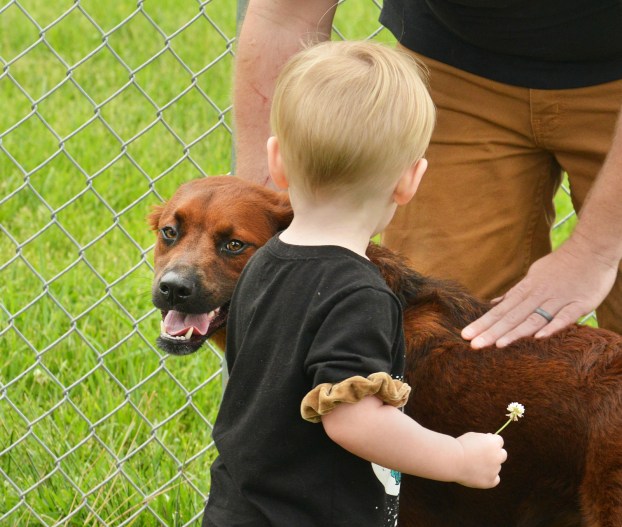 Jeremiah Wardrip, son of animal control officer Jacob Wardrip, pets Logan as his dad holds him during a test to see if the dog is child friendly. (Photo by Robin Hart)

Boyle humane society’s save rates are better than ever

Board president Fizzy Ramsey says, “We busted our butts to make these changes.” 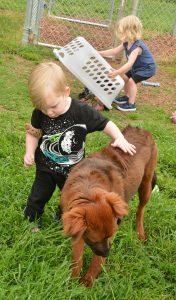 For starters, the shelter has been working with Dr. Sara Pizano, who created Team Shelter USA, a national animal welfare consulting firm helping organizations and municipalities implement best practices. Team Shelter has been collaborating with Bluegrass Area Development District to provide needs assessments to all participating Humane Societies and shelters.

The process was paid for by the Joanie Bernard Foundation, organized after a woman left $80 million from her estate to benefit cats in Cincinnati, Ohio. It has since expanded to administer grants for community programs run through shelters that positively affect cat overpopulations.

“I was ecstatic to get a third-party person who comes in and says ‘here’s what you need to do,’” Ramsey says. There’s so much out there to read from this and that organization anymore, she says it can be overwhelming.

Pizano’s visit with DBCHS was in November, when she provided initial feedback during and after. Ramsey says the shelter hopped to it, making all the changes she recommended — at least the ones that were within their abilities to make.

Then, DBCHS got a $20,000 spay/neuter grant through PetSmart. “That came along at the absolute best time, and we were able to begin the community cat program,” Ramsey says, which five area veterinarians participate in. The grant covers a year, and will pay to sterilize more than 400 community cats. The cats are returned to their communities because they are territorial, and eventually the population will greatly decrease, as has been seen in areas like Chicago and Northern Kentucky by using the same program.

Pizano made a follow-up report in March, which included the highlight that “many recommendations were made to improve the operation that have now been completed in an impressive short period of time.”

She noted how community cat programs are now underway, and the dog save rate has been steadily increasing over the last several years and has began hitting all-time highs. March 2019 was the first month in the history of the organization to exceed a 90% live release rate for cats, and the shelter hit the zero mark for euthanisia of cats for space/population control.

And statistics are now reported to Shelter Animals Count, where Pizano can log in and take a quick review of whenever need be, Ramsey says.

“In the past, I think we shied away from our numbers. We didn’t talk about them or look at them — we didn’t own them,” she says. Now, Ramsey and John Hambel, director of animal control and shelter manager, sit down weekly together to look at statistics.

“We pay closer attention to length of stay, to the returns … It’s not just about getting dogs out of there; we’re not just shuffling them out the door. It’s about getting them to the appropriate homes. We’re doing more to match them in order to decrease the rate of return, and increase the reclaims,” she says. 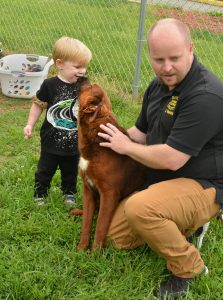 Jeremiah Wardrip, son of animal control officer Jacob Wardrip, receives a sniff from Logan as his dad holds him during a test to see if the dog is child friendly. (Photo by Robin Hart)

The shelter has upped its social media game, too, making sure any new intakes are posted immediately. And it is making the consultant’s follow-up report available to anyone who wants to take a look. “We want to have transparency — across the board — in regards to our transitions,” Ramsey says.

An opportunity for improvement Pizano listed is that the shelter needs to create a fundraising plan so it’s not dependent on adoption fees for revenue; high fees correlate to longer lengths of stay, but don’t correlate to a good home, she wrote.

The report states the shelter should also be asking for a donation with each adoption; and may want to consider “ongoing fee-waived adoptions for cats” and low fees for dogs, around $35. Pizano said DBCHS may also want to consider adjusting the adoption hours, and instead of 8:30 a.m.-4:30 p.m., consider 10:30 a.m.-6:30 p.m. so no additional staff is needed. She said the shelter should consider discontinuing testing cats for feline immunodeficiency and leukemia viruses, because the evidence rates are so low.

Team Shelter’s report said the shelter should create and coordinate a “Safety Net” program with all area non-profits with a community-wide hotline managed by volunteers. According to the ASPCA, Safety Net programs work to provide alternatives to “pet parents” who want to surrender their pet to a shelter, such as counseling to determine if they need certain training items; offering resources for pet food banks, community vaccination clinics and low-cost spay/neuter services or behavior classes; or to find temporary housing for animals whose pet parents are in crisis.

The report says the shelter should use the “return to field” process for cats. That means in lieu of shelter intake, any community cat brought to the shelter will be spayed or neutered, vaccinated and eartipped (a method to identify a spayed/neutered and vaccinated community cat) and returned to its original home location, where the cat was cared for and not in need of intervention.

“It’s good to get your feathers ruffled in a way — to shake us up in a sense, to give us some direction on how to focus our efforts,” Ramsey says. The shelter has so many programs in operation, she says it’s best to take a step back and see, “This is working, that’s not working, what can we tweak to maximize what we’re doing.”

Ramsey provided an old letter written by the late Kathy Nelsen, who the shelter is named in honor of. Nelsen was describing how and why Happy Paws Spay/Neuter Clinic came about in 2007, which offers low-cost services based on income.

Pizano’s recommends DBCHS find $49,210 in funding —  $39,000 to get an estimated 600 community cats sterilized through the return to field program; $10,000 to help with income-targeted spay/neuter programs for cats and dogs; and $210 for portals needed in between cat cages. 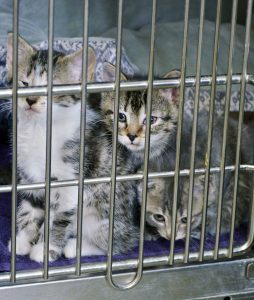 A few kittens are available for adoption at the DBCHS. (Photo by Robin Hart)

Ramsey isn’t for certain on when they will find out what funding is due to come through. Pizano will return in the future to meet with local government to offer guidelines on creating ordinances that best serve animals and public health.

“It works. It just takes a buy-in from the whole community — a buy in from animal control, and a change in the ordinances, in regards to how cats are managed. And that’s needed statewide,” Ramsey says.

Since the community cats program began, Ramsey says the shelter has helped organize over 50 surgeries, which often involves some community education about cat behavior and population. “People will bring them in, and we give them the opportunity to keep them, get them scheduled and fixed, rabies shots and the cat can go to their homes. Or we’ll get their permission and we get the cat altered and take it back to its original location.”

Ramsey says the shelter is projected to have a challenging May, since it’s in the midst of kitten season. “But having numerous foster homes for kittens provides the invaluable resource of personal care and socialization prior to adoption without overcrowding the shelter.”

Potatoes should be plentiful on the Kentucky School for the Deaf campus when it’s time to harvest. On Thursday morning,... read more