Junction City night patrolman Russell Preston was named Junction City Police Chief by Mayor Jim Douglas following the retirement of Merl Baldwin on May 1. This is the second time Preston has held the position. He was police chief of Junction City from 1983 to 1990, he said.

During the regular city council meeting Thursday night, Preston said he’s been working back in Junction City for the past three years on night patrol. “A lot of people didn’t even know I was back because they never seen me,” Preston said.

He told the council that over the course of the past two weeks as chief, he’s issued 38 notices of violation for high grass, trash and debris. Thirty-seven of those issued notices “pretty much” complied, but one offender is being taken to court.

He also issued several speeding violations within the city limits. “It’s still a problem along the roads. But we hope to curb this issue by being more visible, being out for the public to see,” Preston said. “I try to cover every street in town at least once or twice a day — problem areas a whole lot more. Radar will be run in areas where speed enforcement needs to be generated,” Preston said.

Following the meeting, Preston said he’s worked in law enforcement for 40 years — as Junction City police chief; Lancaster police officer then worked his way up the ranks to chief; five years as night supervisor at the Boyle County Detention Center; and the past three years as night patrolman in Junction City. 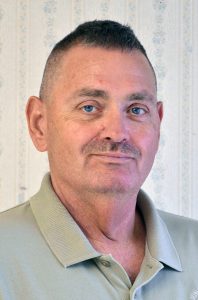 Preston said the Boyle County Sheriff’s Office, Kentucky State Police and Garrard County’s K9 unit are “going to assist us in trying to work on our drug problem.”

“I try to be fair and honest and just with everybody. Anybody I can give a break to, I try to give a break to. But I’m strictly against drugs and DUIs and abuse of any kind,” Preston said. “What’s right is right and what’s wrong is wrong.”

He emphasised that “All laws will be enforced. All traffic violations will be enforced. We’re 100-percent pro-arrest on getting impaired drivers off the roadway, drugs out of our community, and be there for victims of violence and abuse,” to make the community “a good area for our kids to grow up in.”

Preston said, “A lot of people know me from over the years. I’ve either brought them a can of gas, or worked a wreck on them, helped them look for a lost child, or arrested them. … I know a lot of people.”

Preston said two officers will need to be hired since Baldwin had already left the office, and a second officer is planning on retiring in July.

In other city business:

• The council approved the purchase of a 2013 mini excavator for the cemetery department to use at a cost of $21,500. Cody Martin who works at the cemetery, said the excavator can get into tight spaces for digging graves that the backhoe can’t. The city’s large backhoe also is very heavy and tears up the cemetery. Also, owning the mini excavator will be more cost effective than hiring someone else to dig graves, he said.

City Clerk Susan Music gave a recent example of a family using the Junction City cemetery just because of the cost. “This is what I don’t understand,” she said.

A family was traveling through town from Michigan and a family member died. “They didn’t want to take Grandma home, so they found the cheapest cemetery to put her in, and bought the lot, and that was us.“

The Boyle County Board of Education reviewed protocols for the new drug-testing policy it is enacting next school year Thursday... read more