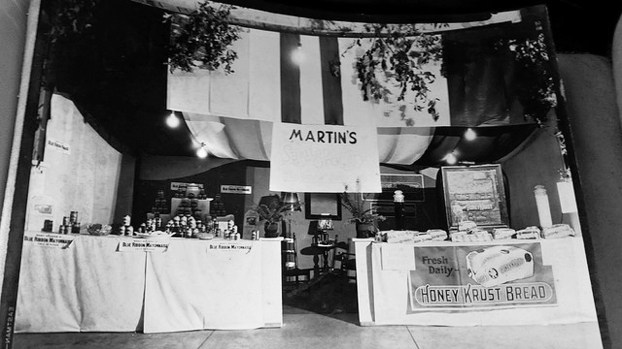 Photo contributed An exhibit at Martin’s Sanitary Grocery is similar to the one that was judged in state competition in June 1936.

Editor’s note: Information was taken from the Kentucky Advocate archives. The photo belongs to Sharon Stratton.

Boyle County  produce, canned goods, country hams and arts and crafts were exhibited 73 years ago at Martin’s Sanitary Market on Fourth and Walnut streets. Cash prizes were awarded in the local competition.

The most outstanding things entered in the exhibit were sent to Frankfort for the “Onward Kentucky Statewide Foundation Exhibit” competition.

The exhibit was sponsored by the Danville Chamber of Commerce and Boyle County Farm Bureau, in cooperation with the Onward Kentucky movement.

Articles suggested for the local display, with no limit to the number of exhibits, were:

“Boyle County has a number of people with a reputation for country cured hams,” according to a 1936 article in The Advocate-Messenger archives.

The county and state exhibit offered an opportunity for advertisement and sale of hams as well as other Boyle County products, according to the article.

Five country hams from Boyle County were in the list of 100 prize hams from all over Kentucky and sold for $7.50 each in public auction.

Anna Tribble of Danville won first place in the cookery arts exhibit with a fruit cake.

Orders also were taken for various articles in the home products exhibit at Martin’s store in connection with the exhibit.

Martin’s Sanitary Market was opened by Danville native William B. Martin, who operated it more than 20 years in two locations. He opened the first store on Walnut Street and later built a new modern structure which housed Danville’s first supermarket at the corner of Fourth and Walnut streets.

He advertised his place of business as “one of the cleanest and finest stores anywhere.”

Martin’s store was also used as a voting precinct in the 1920s and he allowed the property to be used for charity fundraisers. Martin sponsored a softball team in the 1930s.

In February 1936, Martin and J.P. Harberson of Perryville, who worked at the Danville store, announced in the opening of a new Sanitary Market in Perryville.

“The Perryville store will have the advantage of being connected with the Danville store, as quantity buying of merchandise will make it possible to sell high quality foods at low prices.”

The second largest egg-plant in the world was on display at the show window of Martin’s store in September 1931. The egg-plant weighed six pounds and two ounces.

Bert Eird produced the “Black Beauty” egg-plant on the farm of T.W. Spears in Moreland. Eird, gardener for Spears, had five acres planted in vegetables, and they brought 27 varieties of vegetables to the store to display.

100 YEARS AGO — 1919 How many people in Danville are aware that the remains of the great evangelist George... read more