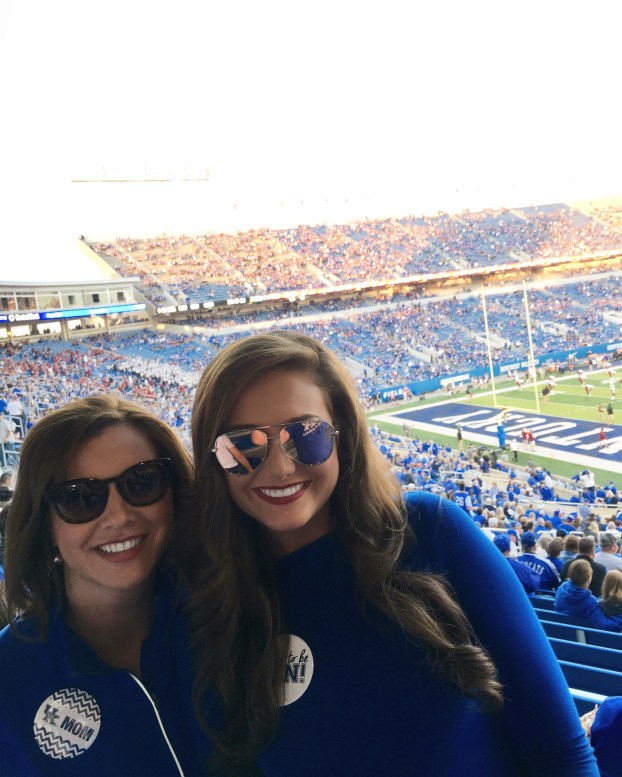 Miss Danville has been passionate about UK sports, pageants since she was little

For Hayley Leach, growing up on a cattle and tobacco farm in Grant County, it is impossible to  remember not being a University of Kentucky fan.

“I am a huge sports fan. I love going to all the Kentucky football and basketball games now,” said Leach, a senior-to-be at Kentucky. “I have bled blue since I was a little girl. One of my first Halloween costumes was a UK cheerleading outfit. I have always watched basketball and that has been a huge part of my life.” 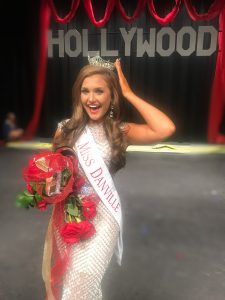 She knows a few Kentucky football players because her boyfriend knows UK senior linebacker Kash Daniel. They are on the bass fishing team together.

“They are both from eastern Kentucky and some football players actually live with my boyfriend. Knowing them just makes being a Kentucky football fan even better,” Leach said.

Next month she’ll be competing to become Miss Kentucky 2019 to earn a spot in the Miss America pageant. She started her “pageant” life at about age 7 when her mother and grandmother thought it would be “fun” to put her in the Grant County Fair pageant.

“I caught the pageant bug and have loved it ever since. It was a great way for me to come out of my shell. Then I found out about the Miss America pageant,” Leach said.

She’s had some amazing experiences. She was a press intern for Sen. Mitch McConnell the spring semester of her sophomore year as part of the Wildcats at the Capitol that convinced her she wants to go to law school at Georgetown University and then work in Washington, D.C. She’s written a book with her younger brother to help families cope with having an autistic child, something that has been her passion since her brother was diagnosed with autism.

“Working for Sen. McConnell was amazing. It was a once in a lifetime experience,” Leach said. “It was so great to serve our state in that capacity and truly inspired me. I was responsible for assembling Sen. McConnell’s state and national press packet, including all the news articles he was mentioned in. Ever now and then I would give a capitol tour, which was great because I got to interact with Kentuckians a lot. I also got to live with other UK students in Washington. The best thing was I used all my scholarship money to pay for my time in D.C. and didn’t have to pay a dime to live there.”

“I was inspired to do more in support of Matthew after he was bullied numerous times at school,” Leach said. “He does have autism but he is high-functioning. He’s graduating from high school and will attend UK and be in pre-med. He’s brilliant. Matthew and I want to write a book together about his experience. We want to help families who might be confused on what they are going to go through, especially younger siblings who have no idea. I knew nothing about what was coming when I found out about Matthew and just want to help others.”

She got to attend the Kentucky Derby again recently thanks to a partnership between Churchill Downs and Miss Kentucky. The Miss Kentucky contestant who sold the most raffle tickets Derby Day earned scholarship money. She sold $2,000 but did not win but had access to everywhere at the Downs, including Millionaire’s Row and the Turf Club.

“So many people saw my Miss Danville sash and came up to me and said they were from Danville or had friends there,” Leach said.

Leach says she’s a “history nerd” and had visited Danville because of historic Constitution Square and also had friends that attended Danville High School. That helped tweak her interest in the Miss Danville pageant and she was also impressed with those in charge of the pageant. 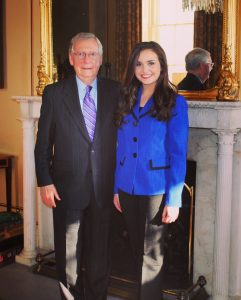 Photo contributed
Hayley Leach, right, stands with Sen. McConnell, for whom she was a press intern.

Now she’s finishing her preparations for the June 5-8 Miss Kentucky competition in Louisville and hopes to do what Laura Jones did in 2016 when she won Miss Danville and then was crowned Miss Kentucky.

“I think I meet all the qualifications for being Miss Kentucky and could do a good job. I am ready to take on the job of Miss Kentucky,” Leach aid. “If I am able to show the judges that, then I think I have a good chance. I have been competing in his organization for a lot of years and that shows the passion and belief I have in the good the organization does.”

She has a unique talent — clogging. She grew up watching her grandmother clog and learned from her before starting to take lessons at age 8.

“Mine is more contemporary clogging. My stuff is high paced. I use upbeat music,” Leach said. “It’s a pretty draining routine. I usually work on my dance four days a week.”

However, Leach knows what her best quality will be in the competition.

“I would certainly say interviews are my strength,” Leach said. “I love talking with judges and telling all the things I am involved in and why I am the best person to be Miss Kentucky. If you give me a chance to talk, I am going to talk and tell my story.”