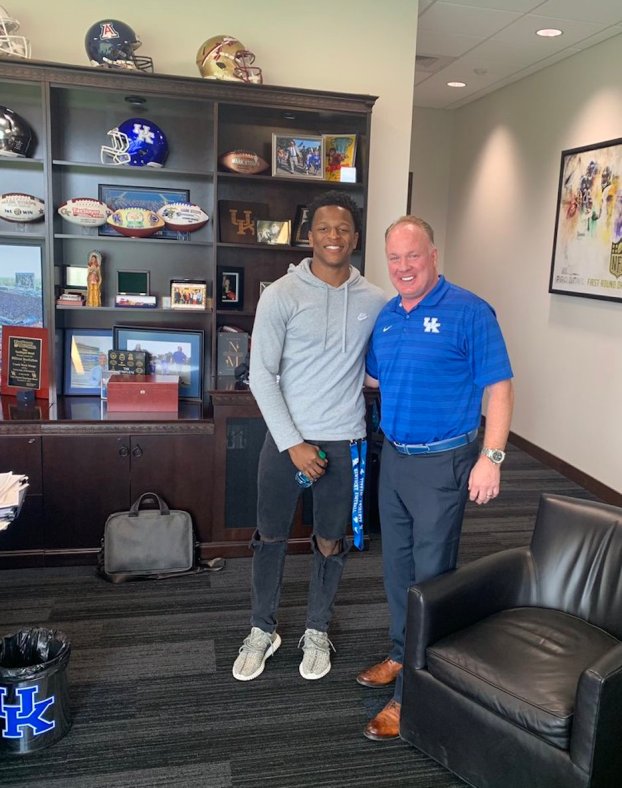 Photo contributed South Carolina cornerback Andru Phillips grew up in Louisville and says he committed to Kentucky and coach Mark Stoops because it “felt like home.”

South Carolina cornerback Andre Phillips said he had “felt a lot of love coming my way” since making his verbal commitment last week to play football at Kentucky.

“Everybody has my back. It’s just been great since I committed. I feel relieved to have the decision made,” Phillips said. “I had several options and my friends were not certain what I might do but I think they kind of knew it was probably Kentucky for me.

He is ranked among the nation’s top 60 cornerbacks in the 2020 recruiting class by 247Sports. He had offers from a variety of schools including Virginia Tech, Tennessee, Louisville, Wake Forest and West Virginia. His decision basically came down to UK over Virginia Tech.

His father, Carlos, is from Owensboro — his mother is from Danville — and won a state title there playing with former UK star Mark Higgs. Carlos Phillips also played at Kentucky for coach Jerry Claiborne. Andru Phillips lived in Louisville through middle school when his father took a job in South Carolina. Andru Phillips’ brother, was an offensive lineman at Morehead State from 2013-16 and started 46 straight games.

“I grew up in Louisville going to UK games and being a fan and everything,” the 5-11, 180-pound Andru Phillips said. “Dad has a lot of people who know about his career and he tells me a little bit about the kind of player he was but he doesn’t talk a lot about himself. He was there with me the whole recruiting process but never once told me he wanted me to go to Kentucky or anywhere else.”

Andru Phillips still has grandparents living in Kentucky and admits being close to family helped influence his decision to commit to UK.

“It is just home. Any time I go back to Kentucky, I just feel great overall,” he said.

He had the same feeling watching the NFL draft when UK cornerback Lonnie Johnson was picked in the second round and safety Mike Edwards in the third round. Three other UK defensive backs signed free agent contracts after the draft ended.

“The draft really opened my eyes and showed what could happen at Kentucky and that they could put players in the NFL just like anybody else,” Andru Phillips said.

He said if secondary coach Steve Clinkscale could have that impact in the short time he’s been at Kentucky, he wants to be part of that.

“I feel like I’m similar in skill set as those guys. I feel like I can do what they do. I just have to be coached up and go out there and perform,” Phillips said. “I am a really physical corner. I can cover (the pass) well, too. Mainly, I am just very physical in everything I do. I have good speed. I run track. Last year as a sophomore I was runner-up in the state triple jump (49 feet, 1 inch).”

Kentucky shortstop Katie Reed will be playing in her fourth straight NCAA Tournament next week and is part of a senior class that has won over 150 games.

She had started 227 consecutive games in her four years going into this week’s SEC Tournament and had 249 hits, 142 runs scored and 117 runs batted-in.  Teammate Abbey Cheek is already UK’s all-time home run and RBI leader as well as the leader in runs scored. Catcher Jenny Schaper has been a four-year fixture behind the plate.

How will Kentucky coach Rachel Lawson ever replace such a talented trio along with their other senior teammates?

“This year we have huge freshman class,” Lawson said. “I think they will be ready next year. They will have some positions to fill, but coach Lawson talks about never having a rebuilding year. After my freshman year we lost six seniors, but we did not want to spend a year rebuilding. I hate we will not be here next year but the younger players have learned about everything we do and what is expected of them.”

Reed admits it will be an “adjustment” for teammates not to have five seniors to lean on next season.

“For coach Lawson, having Jenny behind the plate four years has been special. She’ll have to adjust to a new catcher and that is a big deal,” Reed said. “Abbey’s bat will be hard to replace. She’s one of the best players in the country.

“But this is why you have to recruit and why you bring in players and have senior leaders to show them what to do and what is expected of you. Hopefully our senior class has done that for the players following us.”

Miss Danville has been passionate about UK sports, pageants since she was little

By LARRY VAUGHT Contributing writer For Hayley Leach, growing up on a cattle and tobacco farm in Grant County, it... read more