The Danville High School forensics team poses for a photo after a recent victory. ( Photo contributed.)

Forensics, gardening come to the library Thursday, thanks to Friends

The Friends of the Library have brought high quality programs with a Kentucky connection to the library for numerous years. Thursday, Friends continues that tradition at Boyle County Public Library with two different events offered the same day. 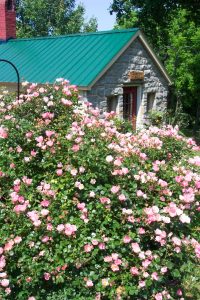 At 4 p.m. Thursday, the Danville High School Forensics Team will offer Talk of the Town, a unique event involving debate and drama, performed by some of Danville’s most talented public speakers.

Led by head coach Steve Meadows, DHS Forensics is one of the country’s most successful high school speech and debate teams. The team has nine state tournament wins, two national championships and 19 national finalists over the past 24 years. Students compete from November to March in the regular season with national contests in May and June. DHS competes in 14 speech and two debate events ranging from Impromptu Speaking to Dramatic Interpretation.

The Forensics Team members will give the public some highlights of their material in what many are surprised always turns out to be an incredibly entertaining show. For more information on Danville Forensics, visit www.danvilleforensics.org.

Then, at 7 p.m. Thursday, Jim Coy will discuss the creation, destruction and restoration of Shady Lawn Garden located on his farm in Kirksville outside Richmond. Coy’s presentation, Shady Lawn Green Garden: Creation, Destruction and Restoration, will focus on the farm which has been in the Coy family since 1975.

The farm was hit by a lethal tornado in May of 2009, which destroyed both the home and garden. They have devoted much time in the restoration of the garden.

Coy says, “This is the story of ordinary farming folks who have been on the same land for a very long time, and how the gardens became as much a part of their lives as the woods, pastures and crops in the fields.”

Coy’s wife, Ruth, will also be on-hand for the presentation. The Coys have been recognized with the Civic Improvement Award from the Garden Clubs of America for their leadership roles in both Mississippi and Kentucky.

Both events are open to the public and will be held in the Community Room at the library. Refreshments will be available.

Front Page History: Parks & Rec, jail were on the front-burner 44 years ago, too

Forty-four years ago today, in 1975, magistrates of the Boyle County Fiscal Court were discussing some of the same issues... read more