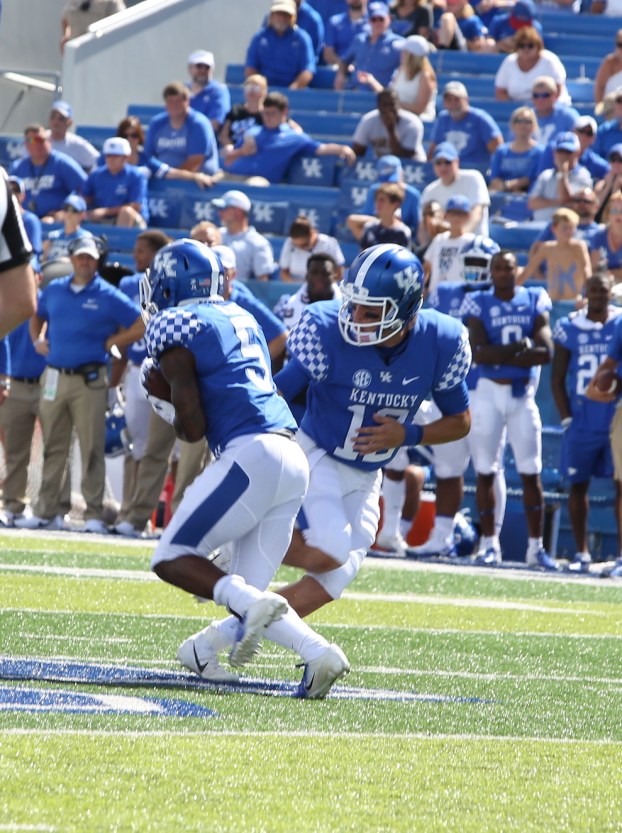 Gunner Hoak hands off the ball to a teamate during a past UK game. (Photo by Vicky Graff)

Gunnar Hoak is working out with his Ohio State teammates and attending team meetings to get into a new routine after transferring from Kentucky about three weeks ago.

Hoak, a three-star quarterback from Columbus, completed 13 of 26 passes for 167 yards and two scores last year as Terry Wilson’s backup. However, with Wilson having two years of eligibility remaining also, Hoak opted to leave UK as a graduate transfer.

“It’s a lot different than the recruiting process that you go through in high school. If you have never been through it, it’s hard to explain so that others can understand what the transfer process is like,” Holly Hoak, Gunnar’s mother, said. “As a parent, you experience one thing. If you are an athlete, I am sure it is a different experience.

“It’s not like a rebirth, but you look at it through a different lens. You know what is going at you and what coaches are going to say and what they are looking for.”

New Ohio State coach Ryan Day apparently said the right things to Hoak to let him know he would have a chance to compete for the starting job, something every quarterback wants to do.

Not every Kentucky fan was happy with Hoak’s decision to leave because it left UK without an experienced backup. Coach Mark Stoops solved that dilemma Monday when Troy graduate transfer quarterback Sawyer Smith picked UK. McClane Carter of Texas Tech also considered UK before transferring to Rutgers where he felt he had a better chance to start. Penn State’s Tommy Stevens also visited UK but has yet to pick his school. Plus, Ohio State needed another quarterback after Matthew Baldwin transferred to TCU in the growing trend of quarterbacks transferring to find a better situation.

“This is something that weighed heavily on us as a family,” Holly Hoak said. “We make a lot of decisions together. It was difficult for Gunnar to leave a place he was committed to and felt at home. But as an athlete and someone who has dreams of playing, you have to make sure that you finish your career without any regrets.

“Gunnar had every intention of staying and finishing out his Master’s at UK but he had to decide if he wanted to be a backup or did he want to get a shot to play and look to get his Master’s somewhere else. We told him whatever decision he made, we would support him.” 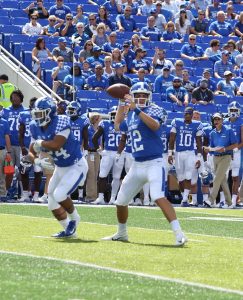 Gunner Hoak throws the ball during a past UK game. (Photo by Vicky Graff)

Obviously growing up in Columbus he was a Buckeye fan. His father played there. An uncle coached there. A cousin played there. Gunnar Hoak grew up going to camps there. However, coach Urban Meyer was using an offense that didn’t fit Hoak.

“Not that he was expecting to go there because he knew in his heart as much as he loved it, he was not a fit for Ohio State,” Holly Hoak said.

Eventually he came to the same conclusion at Kentucky where coach Mark Stoops and offensive coordinator Eddie Gran went with a run-heavy offense that didn’t fit best for a pocket passer like Gunnar Hoak unless he was content being an emergency backup.

“We just told him that he was a man, not a 17-year-old boy like when he was recruited out of high school,” Holly Hoak said. “We told him to look at it not just from a football standpoint but from what he wanted to do with his life. Where do you see yourself 10, 20 or 40 years down the road.

“We told him he could be done with school and get a job. But he had two years of eligibility left and could use that to get his Master’s and find a place to compete. It was up to him. Even if Gunnar had stayed at Kentucky, we wanted him to compete.”

Holly Hoak says many assumed the transfer to Ohio State was mainly about his family’s legacy. Instead, she says it was about the right fit he found back home.

“The fit is not just football but where will he be in 40 years,” she said. “I am sure if a kid from Kentucky is a basketball player and plays at Kentucky that opens doors if he plans on living his life in Lexington. Gunnar’s girlfriend is from here. He thinks his future is in Columbus. Other schools reached out. He talked to them but felt his best option was Ohio State. It was not the drive of the family legacy but just a sense of coming home, being back where he was comfortable and seeing the right fit.

“He loved Lexington. He made great friends on the football team and had a great relationship with (quarterbacks) coach (Darrin) Hinshaw. Leaving was hard but it’s kind of like when you leave your high school friends and familiar settings. Sometimes you just have to roll the dice. Gunnar has handled himself well. He’s been mature through it all. It’s unfortunate how some things have gotten twisted by some about his transfer. Bottom line is he loved being at Kentucky but just had to do what he felt was best for his future.”