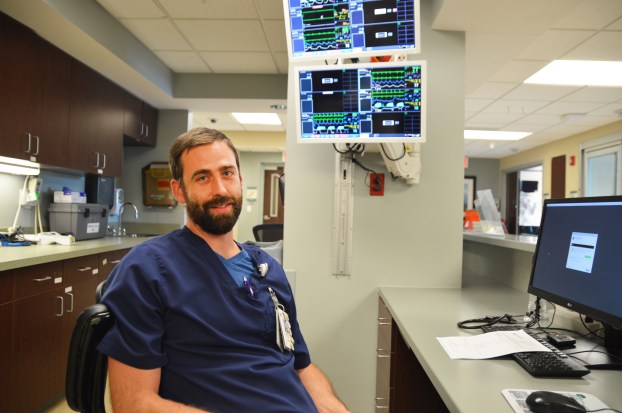 Billy Dengel is a registered nurse who works on the ICU floor of Ephraim McDowell Regional Medical Center. (Photo by Bobbie Curd)

ICU nurse has demeanor that works for critical care

Billy Dengel thought he had left nursing behind. He grew up watching his mom as a certified nursing assistant, and took a class in high school.

“I did go on to work as a CNA at a nursing home for a while after I graduated,” Dengel says, but then be began working in a factory and decided to study industrial maintenance. But he hated it.

He needed to get back to working with people, and into something that required more critical thinking, instead of the same repetitive motions over and over again, he says.

Dengel changed his major, and has been a registered nurse since 2013. He came to Ephraim McDowell Regional Medical Center around five years ago, and has always worked in the ICU.

Caring for patients in intensive care is a lot different than on other floors. “Of course, we have sicker patients, so we don’t have as many to care for per nurse because they take more time.”

Dengel takes care of patients on ventilators, for example, or those who are getting continuous dialysis. 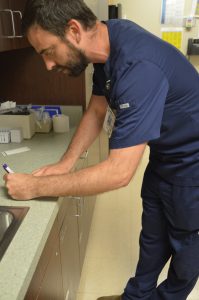 “And there are a lot of drugs out in the community, so a lot of overdoses come in,” he says. He drives an hour from his home in Campbellsville, where he gets up at 5 every morning to give him plenty of time to get to the hospital by 6:30 for his 12-hour shifts. Every day can be totally different, he says.

Dengel starts by looking up all his patients, reading doctors’ notes, and reviewing labs and medicines, as well as the reports from the off-going nurse.

“I walk through and look at all my patients, make sure the meds are going at the rate they said they should be, check all my IVs to make sure they are working correctly, and just overall making sure my report matches up with the patient.”

Because he has fewer patients per shift, Dengel says it’s common for him to really get to know them. He says many might be surprised by the interpersonal connections nurses develop with their patients and families.

When the patients get moved off to another floor because their condition improves, he often will visit them, just to say hello and see how they are. He’s received cards after patients leave, thanking him for his care; even chocolates from the family of a patient who passed.

Originally from Wisconsin, Dengel moved to Kentucky with his family when he was 10, then to Campbellsville after he got married.

His wife really likes what he does, “but she always sees all this stuff on ‘Gray’s Anatomy,’” Dengel says, joking about how the television drama makes it appear as if it’s a common thing for medical professionals to “hook up” in the on-call rooms.

“I tell her oh no, it’s not like that. No on-call rooms. And we don’t play cards,” Dengel said, referring to a remark made back in April by a Washington state senator that drew a firestorm, and an apology by the senator.

Dengel’s ID badge is covered in DAISY pins — he’s been nominated for the award nine times and won once. The hospital recognizes nurses with the national program which honors compassionate care and clinical excellence, and if Dengel gets one more, he’ll get a special platinum badge. He said it’s a huge honor when a patient or family member nominates him.

“It means a lot to me that they took the time to do it, and it lets me know I’m doing something right.”

Although he’s not entirely certain why, Dengel says the elderly “seem to take a liking to me, and I really enjoy working with them.” He said the same about patients who are suffering from confusion.

Dengel also likes working on patients who need renal replacement therapy — he describes it like dialysis, that can go on for a few days.

“I enjoy running the machine … like how I was going into industrial maintenance because I like working on machines, too — this gives me both sides of that. A mixture of people and working engineering and tech, too.”

He walks into the drug room, punching in codes in the main door, then more codes into the machine that dispenses the drugs. Dengel says the tall machine is very handy.

“I used to work in a nursing home … my heart goes out to all the nursing home nurses pushing those carts around that you have to bend over” to access, which can be super-tough on the back, he says.

As he measures out a dosage of Propofol, a powerful sedative, he explains that some meds have tubings that expire. “And this medicine tube is only good for 12 hours, so we have to label it ….”

His least favorite part of the job is charting, where vital statistics and other information must be entered into the system. “I don’t like that. A majority of my time is spent doing it. We use computers to make it easier for record-keeping and billing, but it still takes a lot of time. I’d rather be doing patient care.”

“Danielle — what do we do that might surprise people?” Dengel asks nurse Danielle Bailey.

“In ICU, we give total care. People are surprised when they find out the nurses bathe and feed them …”

“Yeah. I ask patients what their favorite kind of music is when we do baths, so I can play something they like during it,” he says.

Dengel also likes teaching other nurses. “Every semester, I help a student in nursing school for about 10 days, before they take their exam.” They follow him for his full 12-hours, which can be hectic.

“If you have two or three really sick patients and are trying to teach, sometimes it can slow you down. But I have to remember why I’m doing what I’m doing, to help teach a new one and get them ready.”

Of course there are bad days. People can be less than ideal to deal with. And people can die.

“When people are here, in the ICU, it’s the worst time of their lives,” he says. “I keep that in my mind — all of the time.”