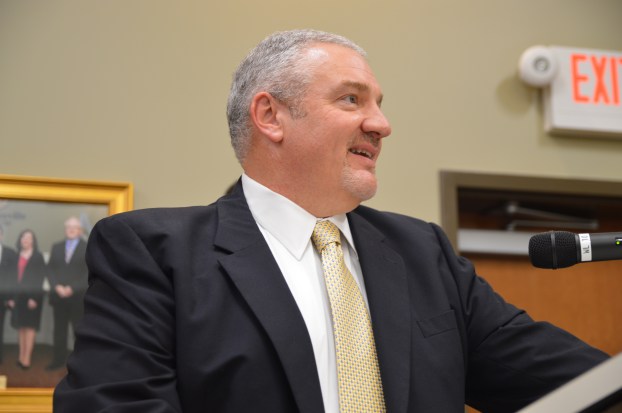 New Parks & Rec director Monday, John Bell, was introduced to the commission by Parks & Rec Board chair Bryce Perry as having an “outstanding background in parks throughout his whole career, and extensive experience with implementing master plans.” (Photo by Bobbie Curd)

In what Mayor Mike Perros described as a momentous occasion, the Danville City Commission met the new Parks & Recreation director Monday during its regular meeting.

Monday, Bell was introduced to the commission by Parks & Rec Board chair Bryce Perry as having an “outstanding background in parks throughout his whole career, and extensive experience with implementing master plans.”

Bell, who came to Danville from St. Louis, said the position will be a personal and professional change for him, and he is looking forward to the opportunity and challenges.

“I look forward to … making advancements for Parks & Recreation for the community and providing advanced service and advanced programs …” Bell said.

Mayor Perros said he was at a gathering earlier Monday that focused on economic development, and an aerial photo was shown of the parks facility in Elizabethtown.

“The point of that is that it’s a major economic engine for those folks. And I think a bit of salesmanship, which we’ve been trying to do now for a couple of years — it’s more than a park, more than just recreation; it’s an economic development tool,” Perros said. “You get that … I appreciate you coming in and casting your vote of confidence by moving your family here.”

“Parks & Recreation, it is a service, but yes — it can be a leader in economic development,” Bell said. He said parks can become a destination for those who live outside the community as well, “if we foster the development of those parks. Therefore, expand what their visit is. Not just to the parks system, but throughout the community to see what the other services we have to offer are.”

Perros asked Bell what attracted him to the job with Danville-Boyle County Parks & Rec. 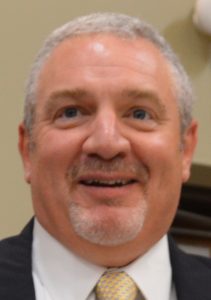 “You got one,” Perros said, to some laughter in the room. “You’re getting your money’s worth.”

Parks & Rec has been without a director since August, when John Drake retired. The city and county have been attempting to rework the parks ordinances, which have been on the books since the ‘90s, as well as come to a funding agreement, but joint meetings held between the two entities haven’t turned out so well.

Some Boyle County magistrates are steadfast about not funding city parks inside Danville, only Millennium Park, which the county and city share ownership of. City commissioners are of the notion that all parks are in Boyle County and used by county residents and should be jointly maintained on some level.

Bell said it’s easy in any job to get complacent, and he felt he needed more of a challenge. “I am not one that will shy away from challenges, I welcome that. But also, the fact that the master plan has been completed. You have a destination, now you have to develop the road map to get to that destination.”

Bell said he looked forward to working with the commission and county magistrates, but also the residents, “to figure out what their goals are, their desires are, and then encompass my experiences and my beliefs as to the best way to get to those goals.”

Bell said his aim is not to “come in and establish my goals for the community, but to take the community’s goals and develop the road map.”

“Music to my ears,” Perros said.

Board chair Perry added, “This has been a long, drawn out process, for reasons that we won’t go into tonight. I just want to say on the half of the board, we appreciate the support we’ve gotten from the commissioners and you, specifically, mayor, that we’ve gotten throughout the whole process … We’re looking forward to moving on.”

Perros thanked Perry for the work he and others put in on the new director search. “Looks to me like you did a really nice job. You hit the ball out of the park — no pun intended.”

Tuesday, when Judge-Executive Howard Hunt said, “Next, we need to meet our new Parks & Rec director,” Amber Shartzer jumped up with a celebratory “woo hoo!” before introducing him.

John Bell was met with a round of applause from the fiscal court.

Shartzer, who works for Parks & Rec, called it a privilege to introduce Bell after “a long-anticipated wait.” She said Bell has only been in Danville for about a week.

“He’s still getting his feet wet, so go easy on him,” Shartzer told the court. She said she is excited for magistrates to get to know him, describing him as a great person with an impressive resume.

After Bell received a round of applause, Hunt told him this was his time to give his “elevator speech,” and share his future plans.

“Future plans will depend upon the community,” Bell said. “I’m not here to set the plans, I’m here to administrate the desires of the community. And that’s something that I feel passionate about.”

Magistrate Jamey Gay welcomed him, and told the court how he stopped by the Bunny Davis Center to introduce himself.

“There was this guy with his head stuck underneath the desk, working on a computer terminal. I was like where’s the new guy? I thought he was the computer guy … he was fixing the computer terminal so it’s a good sign to me that he’s not afraid of getting his hands dirty,” Gay said.

Bell said he is a public servant who has worked in university settings and public sectors for the last 26 or so years, with the ultimate goal of becoming a director, which he’s accomplished twice.

Magistrate Jason Cullen told Bell, “There’s some things that have been floating around, you’ve probably read up on them. We’ll take care of all that, you do what you have to do to get things done, and we’ve got your back and will take care of things on the administrative side.”

Mercer, Boyle waiting for results of RFQ to decide next steps