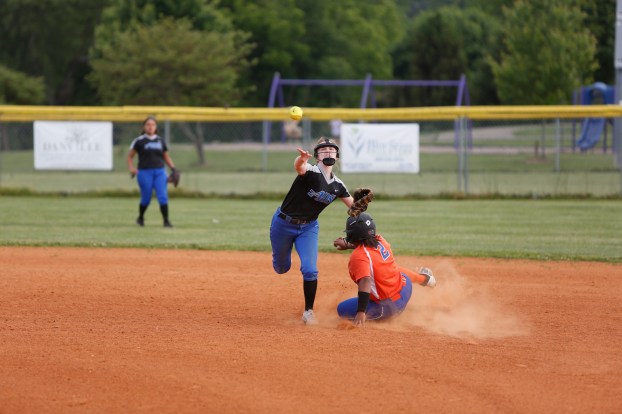 Photo by Mike Marsee Danville second baseman Rachel Matherly throws to first base in an attempt to complete a double play after forcing out Frankfort’s Iyanei Jackson at second base during the second inning Wednesday.

It was a win Danville could have used, but the numbers weren’t in its favor.

The Lady Admirals were looking for a senior night victory that might allow them to build some momentum in the final days of the regular season, but they were left with a 12-2 loss at Millennium Park after stranding too many runners to keep pace with a Frankfort team they had beaten earlier this season.

“It just wasn’t our night,” Danville coach Tim Breitenbach said. “We left nine on base, had the bases loaded twice and didn’t score. We just didn’t really hit the ball when we needed to.”

Danville (4-20), which had won two of its previous four games and scored a total of 39 runs in those victories, dented the plate only twice despite getting eight hits.

The Lady Admirals left the bases loaded in the fourth and fifth innings, effectively killing any chance of a comeback after Frankfort (12-13) had taken an 8-1 lead.

Frankfort cranked out 14 hits in the six-inning game, getting almost half of them in a six-run third inning that broke the game open and allowed the Lady Panthers to avenge a 7-5 loss to Danville earlier this season. 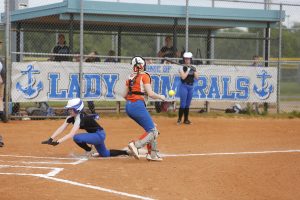 “We thought this would be a ‘W.’ We didn’t perform very well tonight. We looked a little tired and sluggish,” Breitenbach said. “I’m sorry for the seniors, but we’ve just got to keep plugging away.”

Danville has two games remaining in the regular season before facing Boyle County in the first round of the 45th District Tournament, and the Lady Admirals don’t have all of their parts in place.

“We’ve got players that haven’t really played a whole lot playing tonight, and we’ve got a couple out,” Breitenbach said. “We’re kind of playing with what we have right now. There are some positives, but right now it’s kind of about the numbers.”

Samantha Bottom had two singles for Danville, and six other players managed one each.

The Lady Admirals answered Frankfort’s two-run first inning with a single run in the bottom of that frame when Faith Breitenbach reached base on a bunt single, moved to third on two wild pitches and scored on Rachel Matherly’s sacrifice fly.

However, they found themselves in a deep hole after Tatum Williams hit a three-run home run to cap a third inning in which Frankfort scored half of its runs.

Addalynne Hunter, Haley Close, Iyanei Jackson and Caroline Miklavcic strung together four consecutive two-out singles to plate three runs before Williams, the No. 9 hitter, launched the ball over the fence in left-center field.

Abby Thomas, Bottom and Anna Swann loaded the bases in the Danville fourth inning with consecutive one-out singles, but the inning ended with two popups. Matherly singled home a run with one out in the fifth and the Lady Admirals went on to load the bases with two outs before another popup ended the inning.

Frankfort scored once in the fifth inning and three times in the sixth to extend its lead to 10 runs.

By LARRY VAUGHT Contributing writer Gunnar Hoak is working out with his Ohio State teammates and attending team meetings to... read more