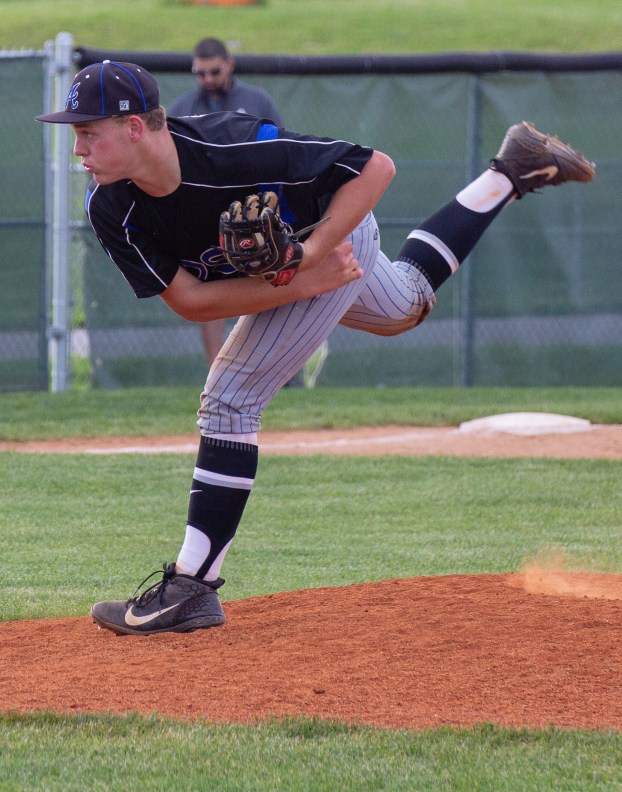 Mercer gets easy win over Danville

Mercer County and Danville’s game Wednesday night didn’t mean anything when it comes down to seeding for their upcoming district tournaments. 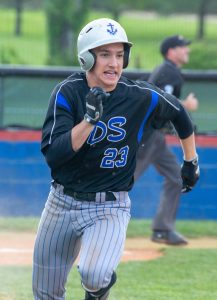 Preston Barnes runs to first on a double in the top of the fourth inning. (Photo by Ben Kleppinger)

However, Titans head baseball coach Adam Shartzer wanted his team to have momentum going into Saturday’s must-win district semi-final game; and the Titans knew they could get that momentum with a win over #11 Danville.

It didn’t take Mercer County long to show they were going to accomplish that task.

The Titans scored 8 runs in the bottom half of the first inning — all with two outs — to easily dispatch of the Admirals 8-0 in the season’s final regular season game.

While the score was lopsided, the game started in innocent fashion.

Mercer County ace Josh Barnett retired the Admirals in order in the top of the first with a pair of strikeouts, while his counterpart, Danville pitcher Christian Howe, got a strikeout and a line out the first two batters he faced in the bottom of the frame.

The Titans leading hitter, Dillon Warren, hit an infield single to short, just beating out the throw from the Admiral shortstop Preston Barnes. That changed the entire inning.

Warren’s single was followed by a Nathan Tatum single moving Warren to third. One batter later, Jamason Sherrow blooped a single into left field scoring Warren and setting the wheels in motion for the floodgates to open.

Shortly after Sherrow’s single, Sam Baughman laid down a bunt single to load the bases. After Baughman’s bunt, Cayden Devine drew a walk to make it 2-0. Sammy Berger’s ground ball to center field plated two and made it 4-0 and signaled the end of the day for Howe on the mound.

Howe was replaced by Noah Goodman but it was more of the same for the Titans.

Keegan Bottom walked to, again, load the bases then Landon McGinnis coaxed a walk to plate the Titans fifth run. That walk signaled the end for Goodman, who was replaced by Brady Baxter.

Baxter then promptly walked Tanner Murphy to make it 6-0, then Warren, who started the entire rally with the two out infield single, roped a line drive to left to plate Bottom and McGinnis. 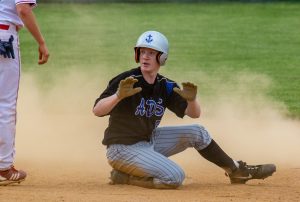 Jaden Larmour signals to his dugout after stealing second in the third inning. (Photo by Ben Kleppinger)

By the time the bottom of the first ended, Mercer County had sent 13 men to the plate–10 of those reached consecutively with two outs–and the Titans had built an 8-0 lead.

“That’s just the type of guys we have,” Mercer coach Adam Shartzer said. “We’re scrappy, we’re going to find a way to get on. Everybody did their job. Their pitchers were throwing strikes and we were able to take advantage of it.”

The Ads, however, had trouble even reaching base on Barnett.

Danville didn’t record their first hit until Barnes hit a laser double off the left center field wall with one out in the top of the fourth. It was the Admirals first — and last — hit of the game.

“I said last game that I thought he (Barnett) threw well against Boyle,” Shartzer said. “I think this performance topped that one. He threw extremely well. The past couple of times he’s been able to locate his off-speed, change eye levels, work the inside and outside part of the plate. He had everything working for him.”

“We were not mentally prepared to play today. We were just going through the motions,” Danville coach Paul Morse said. “It’s just about wanting to come out and play. They wanted it more than us. You have to tip your hat to him (Barnett). He threw the ball well and he’s been doing that all year.” 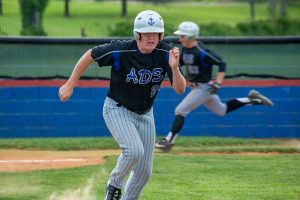 Ben Kleppinger/ben.kleppinger@amnews.com
Hunter Baxter hustles for first as Preston Barnes runs home behind him. Baxter hit into a controversial double play with the bases loaded that ended the inning without Danville scoring.

At the end of the game, Barnett’s line was nearly flawless: seven innings pitched, one hit, four walks, eight strikeouts and zero runs. It was the first time Danville had been shut out since their last game of last season — the 2018 region semi-finals.

The shutout loss wasn’t the way Danville envisioned their season ending but Morse says he believes his team will buckle down before Saturday’s must win region game against Garrard County.

“I think this group will put it behind them. I’m not too worried about that. It’s a group that’s played a lot of ball and I think they are all out there wishing they could play another game right now,” Morse said. “We’ve got two days of practice to get some work in and get ready to go.”

It’s the same mindset for Mercer County, too. A win against Danville is good — but it’s meaningless if the Titans don’t top East Jessamine on Saturday.

“That’s what we talked about out there after the game,” Shartzer said. “We ended the regular season on a strong point but we want to make a statement in the first round of district. Last year wasn’t really the way we wanted to end the season. We have a lot of motivation, the guys are fired up and it’s going to take a team effort in order to advance.” 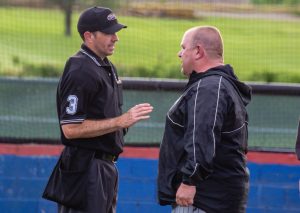 Danville assistant coach Barry Arnold, right, talks with an umpire about a controversial double-play call that ended the top of the fourth, when Danville had the bases loaded. (Photo by Ben Kleppinger) 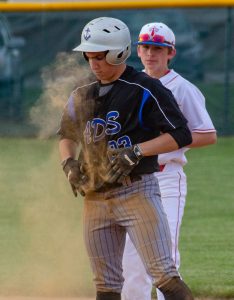 Preston Barnes dusts himself off after doubling in the top of the fourth. (Photo by Ben Kleppinger)

Preston Barnes runs to first on a double in the top of the fourth inning. (Photo by Ben Kleppinger) 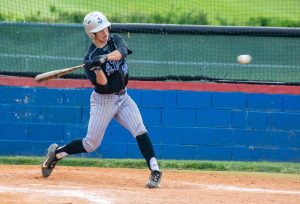 Preston Barnes swings for a double in the top of the fourth inning. (Photo by Ben Kleppinger) 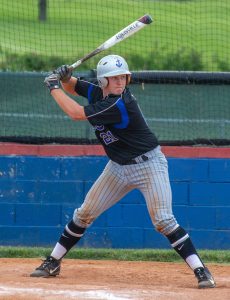 Cayden Shaver waits for a pitch. (Photo by Ben Kleppinger) 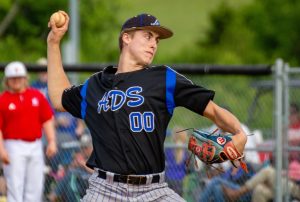 Ethan Wood delivers a pitch in the bottom of the second inning. (Photo by Ben Kleppinger) 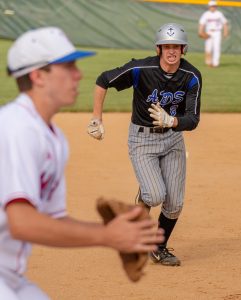 Danville runner Christian Howe tries to steal third on a strikeout; he was thrown out. (Photo by Ben Kleppinger)

By MIKE MARSEE Contributing Writer It was a win Danville could have used, but the numbers weren’t in its favor.... read more