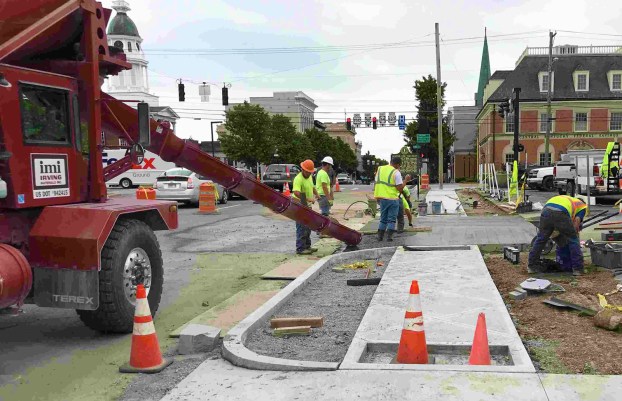 City Engineer John Cassel said as far as the West Main streetscape is concerned, the area will “look pretty decent in time for Memorial Day and/or Brass Band Festival.” He gave a detailed update to the Danville City Commission Monday night, commending contractors on their work and how they’ve handled setbacks.

Cassel said he’s impressed with the progress and called it exceptional work, especially with how crews began in the wintertime.

However, he also fielded some specific questions about areas officials had noticed and did not seem particularly happy about.

The streetscape project began March 5 on West Main Street, and involves constructing a new curb, sidewalks, street lighting and landscaping between Fourth and Fifth streets, through Bluegrass Contracting. The demolition and removal of existing sidewalks was done by Lawhorn Electric.

Cassel said crews were able to “troubleshoot through a lot of issues and difficulties … having to do a lot of construction in a very heavily constructed area. You’ve been working in this area for 200 years, there’s lots of stuff underground, so anything from exposing utility lines to ancient paving bricks.”

He said some workers have said they’ve uncovered the original cobblestones, “but they’re common all over the place around here. Every time you start digging, you run into them.”

Cassel said the demolition on the south side is complete from Fifth to Fourth, and crews will not start on the north side until after the Great American Brass Band Festival (June 6-9).

He said the goal for the south side of the street is to have the concrete, sidewalk, granite and sodding in place in time for Memorial Day or Brass Band. Some electrical work might proceed, he said, with some light poles being set up.

“After Brass Band, they will start doing the demo on the north side, starting close to Fourth, working from there down to city hall,” Cassel said. In front of the Davis building, where Tut’s is located, Cassel said a feature similar to what was done on the corner of East Main and Second will be constructed, called a “porch.”

“They’ve done exceptional work with the weather they’ve had. Bluegrass impressed me with the work it did on fire station #1 (on the bypass) with paving during the winter there, but also up here,” Cassel said. “The guys did a really good job, working pretty safe and doing the best they can do to coordinate with tenants (downtown).”

Mayor Mike Perros asked, “What’s it take to get a beveled edge put on this granite curb?”

Cassel said Public Works will be doing that shortly after the contractor is finished.

“On Third Street? Which has not been done,” Perros asked.

“If it needs to be done on Third Street, we’ll do it. We’ve had some comments … One lady said she replaced two tires because of the sharpness of the granite on the sidewalk against the tires … So, we’re working on it,” Cassel said.

“Stand up here at Fourth Street, and you look down — not a straight sidewalk. Why?” Perros asked.

Cassel said that in the section in front of Speedway, the contractor was trying to go straight from the edge of a curb to another one. “It was partly obscured by landscaping and planning, back when it was designed and drawn up, and wasn’t noticed until after the concrete was set. One little section was six inches out of line.”

He said the untrained eye would have to look for the area out of line to be able to see it, but he doesn’t think it will be an issue once the landscaping is done. “Especially when everything’s in place, the grass and sod. Just one of those things.”

Commissioner Rick Serres asked, “Have you been successful at educating these workers that we’re trying to be a trash free city?”

A downtown business owner, attorney Ephraim Helton, told The Advocate-Messenger he frequently witnessed construction workers throwing trash down and then burying it under the sidewalk.

“Well …” Cassel began, and garnered some laughter when he trailed off. “I’ve seen a lot messier projects than this one. That’s why we didn’t think that much to say much to them before, because it wasn’t as bad as it could’ve been.”

Cassel said many times, he’d walk through the area and there was no trash seen. “Then I’d walk by a few minutes later, and something is there. Did the contractor drop it, or did a passing car throw it over there? We don’t know.”

He said some of the guys are pretty diligent about cleaning up after themselves. “Other guys, they’re tired at the end of the day and thinking about getting home to their families. But for the most part, stuff will be picked up as much as we can notice and see and take care of. Trying to clean things up as much as they can, within reason for a construction site.”

Helton said issues on the site he’s noticed have greatly improved. He’s seen someone walking up and down the area with a trash bag, as well as city staff members who seem to be supervising.

However, Helton said he and others had noticed an area at the corner of Fourth and Main streets, where a pole that supports the traffic lights had the sidewalk poured directly around it. “If someone is crossing in a wheelchair, I don’t see how they’ll be able to do it … “

“A very good observation,” Cassel said. He said the pole supports the cable holding up the state traffic signals and couldn’t be relocated for now.

“They plan to replace that setup with a newer traffic signal structure, hopefully in the near future. When that is done, it is a simple matter to replace those affected panels after the pole is removed,” Cassel said. “In the meantime, the area between the sidewalk and granite curb will have a concrete verge — concrete with a stone pattern. And pedestrians and persons who use a wheelchair will be able to navigate around the pole that way.”

For the streetscape project, the city commission approved the only bid received back for 16 streetlight poles through Graybar, at $7,900 each. The total cost is $126,400, and is included in the amount budgeted for the project.

Kentucky’s primary elections will be Tuesday, May 21. It’s a closed election, meaning only those who were registered as a... read more