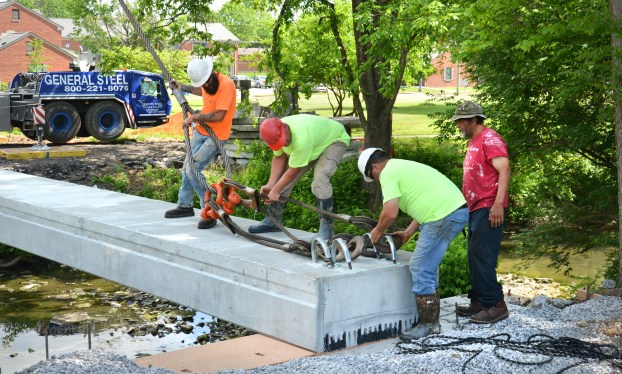 Crews work Thursday on the Second Street bridge project, installing one of two beams that will support the second pedestrian bridge. (Photo by Robin Hart)

Before giving an update on the Second Street bridge replacement project, City Engineer John Cassel first requested a change order in the amount of $26,841 from the city commission Monday night. The project includes replacing the bridge over Clarks Run and adding a second pedestrian bridge.

The additional cost added to the project — making it now total $386,841 — is a result of more issues with utilities. Cassel said the original design idea has the pedestrian bridge closer to the vehicular bridge.

“But once the design phase was entered into, they ran into more utilities underground and overhead than was expected,” Cassel said, along with some other issues that forced crews to move the bridge further downstream.

“The creek widened as you went further down, so the beam went from being 52 to 80 feet,” he said. “Part of the issue with the increase in cost — can’t make it longer and stretch it like a rubber band. And as you add to the length, you add weight … So a bigger, stronger beam is required.” 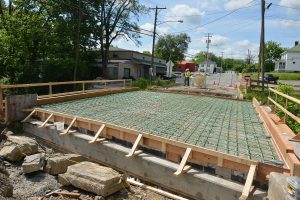 The foundation of the replaced Second Street bridge is in place. Next crews will pour concrete and reinforce it. (Photo by Robin Hart)

And that requires a bigger crane to install it, he said.

“There’s 3-phase electricity going through there, so he didn’t want to risk using an undersized crane …” Cassel said, because they wouldn’t be able to completely control the placement of the larger beams.

The streetscape project on West Main Street also ran into an issue when crews found a gas line just under the sidewalk during demolition, causing some delay due to relocating it.

Cassel said the beams were replaced for the vehicular bridge on Second last week, and the ones for the pedestrian bridge were beginning to be set this week.

“Once you see those in place, you’ll really see the area shaping up quite a bit,” he said. There will be a lot of grating and things to do after that, Cassel said, partly by the contractor and partly by Public Works.

He will be working with the Beautification Committee to get some ideas on approaches for the sidewalks and other areas.

Commissioner Rick Serres said since the new bridge will be spilling into Michael M. Smith Memorial Park, “if there is any overrun on asphalt, that trail is getting beat up.”

“Part of what we’re doing is dressing some of it up that was affected by construction. Close to the road, there will be some of it dressed up,” Cassel said, and added they are looking for ways to make the area look better on both sides.

Serres pushed a bit further, wondering why the city wouldn’t want to look at the additional cost to clean up the trail all the way through the park, since there were machines already there. “It may be cheaper to do it now than next year.”

Cassel said the equipment crews are using for most of the work is a roadside paver. “We need something smaller and narrower, or to do it by hand, on the trails. We can consider it if the money if available, and everybody’s agreeable to it. But with the equipment we’ve got now, can’t just go over there and start working on it.”

Chief Finance Officer Michele Gosser reminded folks that no budget amendment had been created, and the fund for the bridge project only has a minimum amount left. “So we’ll need to do a budget amendment or agree to take that money out of the paving list,” she said.

Earlier in the meeting, Cassel presented the spring paving list, and said they had a total of $290,000 to spend, paying $83 per ton for materials.

“We’ll do as much as we can with the list, and if we don’t get to (a street) we will pick it up in fall. Or, if we have money left over, we have some other streets we can add,” Cassel said earlier.

• Popplewell Lane, from Walton Avenue extension to the end of maintenance road;

• Bonnie Court, from West Jefferson Street to the end;

• Regency Drive/Road, full length plus the Terri Drive connector and a short section of the east end of East Main Street;

The list was approved, as well as the change order for the Second Street bridge project, unanimously by the city commission.