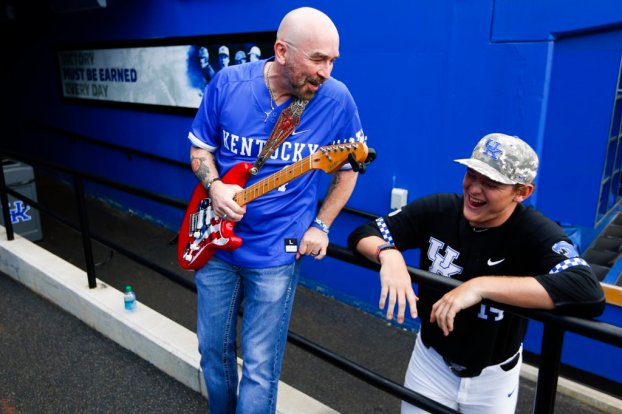 Montgomery Gentry lead guitarist Bo Garrett of Lawrenceburg is good friends with UK pitcher Zack Thomas and says it was a “cool experience” to sing the national anthem before a UK baseball game. (UK Athletics Photo)

Since 1999, Bo Garrett has been the lead guitarist for Montgomery Gentry and has got to be part of many special things thanks to the country music group’s success. However, getting to sing the national anthem at Kentucky Proud Park before the UK baseball team hosted Arkansas was an “honor and privilege” he won’t soon forget.

“Unbelievably cool experience. I’m a huge UK baseball fan, so getting to do it for them, the first year in the new park! Wow!” Garrett said. “It was more nerve-wracking. It was just me, out there alone, with my guitar. None of the guys were around. And you know how much I love this country. I was terrified of messing it up.”

Baseball was Garrett’s love even before music. He dreamed of playing pro baseball. That’s part of why singing before a UK game was special. 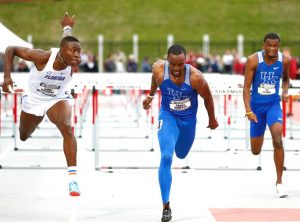 “Between being slower than I looked and not being able to hit a curveball, pro baseball wasn’t gonna happen,” he laughed and said. “But more than that, the way the UK baseball organization kinda just accepted me made it even more special. I think a whole lot of (pitcher) Zack Thompson and can’t wait to watch his (professional) career.

“Coach Mingione, what a great man! And Greg Herbert took amazing steps to make it all so easy! You just honestly couldn’t pair up anything better than music and baseball for me. My two favorite things.”

The opportunity came because of 2016 Chicago Cubs game that Garrett and the late Troy Gentry were attending and Garrett was wearing a UK baseball T-shirt. He posted the picture on twitter and Herbert, UK’s assistant director of marketing, saw it and reached out to him. After that Garrett became good friends with Thompson, UK’s best pitcher this year.

“Zack invited me over to tour the new stadium. We stopped by coach (Nick) Mingione’s office and it (singing the national anthem) came back up. I wanted to make sure I did it while Zack was still at UK,” Garrett said.

He got to keep the jersey UK had personalized with the number four for him to wear during the performance.

“Greg Herbert told me he chose that number in commemoration of Montgomery Gentry’s 4 platinum albums,” Garrett said. “I’ll probably wear it again. We have a couple of Kentucky shows this year so I think it just might look good from the stage.”

What about singing the national anthem before a men’s basketball game?

“I haven’t heard anything from Rupp Arena. But who knows? I love all my Cats!” Garrett said.

In case you might have missed it, for the 14th consecutive semester UK Athletics surpassed its goal of a department-wide grade-point average of 3.0 with a combined for a 3.201 cumulative GPA — second highest in UK history — during the spring semester.

“We commend our student-athletes for their hard work in the classroom and the academic achievement that results from it,” athletics director Mitch Barnhart said. “We are proud of them and committed to supporting them as they pursue their dreams.”

Senior at UK is ambassador for tobacco free campus

Hayley Leach of Grant County has been a press intern for Sen. Mitch McConnell in Washington, D.C., for a semester and co-authored a book on autism with her younger brother, who is autistic. She’s competed in numerous pageants and been crowned Kentucky Mountain Laurel Festival queen while representing the University of Kentucky and also won Miss Wofford County and Miss Danville titles in other pageants — and will compete to become Miss Kentucky June 5-8.

Leach, a senior at UK with a double major in Political Science and Writing, Rhetoric and Digital Studies, is also a UK ambassador for a tobacco free campus.

“My freshman year I was looking for on campus student position,” she said. “This job had flexible hours. It was a paid position but also a leadership position. I applied for it, got it and love it. I want to make our campus healthier. We help educate students about nicotine replacement therapy. We try to help make a difference and try to improve the quality of life on campus that we all love so much.

“Tobacco use is actually down among students but e-cigarettes are a big problem that we are  now working on.”

She grew up on a farm in Grant County where she can never remember not being a University of Kentucky fan.

“I am a huge sports fan. I love going to all the Kentucky football and basketball games now,” Leach said. “I have bled blue since I was a little girl. One of my first Halloween costumes was a UK cheerleading outfit. I have always watched basketball and that has been a huge part of my life.”

She knows a few Kentucky football players because her boyfriend knows UK senior linebacker Kash Daniel. They are on the bass fishing team together.

“They are both from eastern Kentucky and some football players actually live with my boyfriend. Knowing them just makes being a Kentucky football fan even better,” Leach, a runner in high school who qualified for the state cross country meet four straight years, said.

She tries to go to as many sporting events as possible on campus.

“I do stay busy but I do go to games,” she said. “I think it is important to have time to have fun and do normal things and what is more fun or normal than going to watch the Cats. I know some students don’t go to games but I do and hopefully always will get to keep going to games.”

He  might not be a high-profile name on the University of Kentucky campus, but no UK athlete has had a better spring than junior hurdler Daniel Roberts of Georgia.

In late April he stunned reigning Olympic and World Outdoor 110-meter hurdle champion Omar McCleod at the Drake Relays with a time of 13.28 seconds. However, that turned out to just set the stage for what he did last weekend at the Southeastern Conference Championship.

He not only beat Florida’s Grant Holloway (who has four of the top 10 collegiate times ever in this event) for the first time at a championship meet, but he did it in 13.07 seconds. It easily broke the UK record and tied the mark Holloway set in the SEC qualifying round a day before. The time ranks seconds on the all-time collegiate list. The only collegiate hurdler with a better time is legendary Renaldo Nehemiah, who ran a 13.00 40 years ago.

“I’ve been working so hard just trying to compete. At about halfway, I felt him (Holloway) pull away a little bit. I kept hitting hurdles, but I kept pushing through. That’s the main thing – I was hitting hurdles, but I was still pushing really hard so it turned out good at the end,” Roberts said on the SEC Network after his win.

Roberts, already the No. 2 collegian in the indoor 60 hurdles,  might still have more left in him, too.

I already told Daniel that I think he can run under 13 seconds and we might see that come the NCAA Championships,” Kentucky coach Lonnie Greene said.

Kentucky 2020 recruiting target Cade Cunningham, a 6-7 five-star guard from Monteverde (Fla.) Academy, did nothing but enhance his status with his play at the Nike EYBL last weekend in Indianapolis.

Rivals.com recruiting analyst Corey Evans says Cunningham, a Texas native, is “everything that you look for in a next level prospect” in college and the NBA.

“Cunningham is putting together quite the spring and there is not a week that goes by that he is not getting better. He can make shots, rebound, create for others, defends and most of all, sports all of the intangibles that one could ever ask for,” Evans wrote on Rivals.com. “His recruitment remains open for now as Kentucky, Michigan, Texas and Virginia are just a few of the schools often discussed with the elite prospect. He was the best junior prospect that I saw on Saturday (in Indianapolis).”