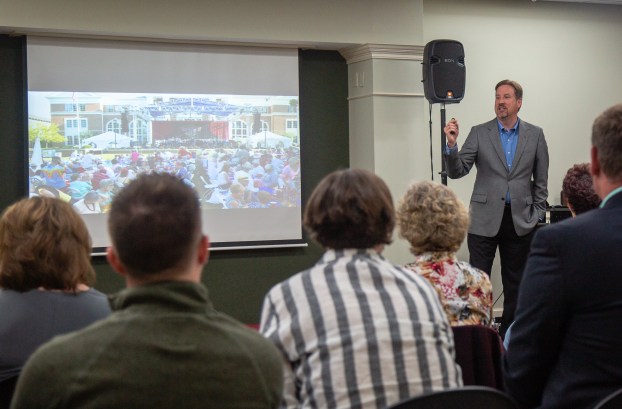 Economic developer to Danville-Boyle: Tell a good story, have a good strategy

Boyle County leaders will find more economic development success if they play the business recruitment game like baseball. That’s the theory, at least, according to Brad Thomas, a widely respected economic developer who works for Kentucky’s Touchstone Energy Cooperatives. 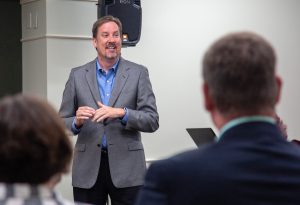 Brad Thomas speaks to a crowd of around 20 at the Boyle County Public Library Monday. (Photo by Ben Kleppinger)

Thomas was the featured guest speaker at the first of a series of community events being organized by the Danville-Boyle County Economic Development Partnership, the Boyle County Public Library and other local organizations.

Thomas said his company, which is a collection of 17 independent electric coops including Inter-County Energy locally, has surprised people across the country with how much business it has been able to attract to the areas where it provides power. Its success is due in large part to a rebranding and reimagining of how the cooperatives ought to present themselves — they unified their outward appearance under the “Kentucky’s Touchstone Energy Cooperatives” name and began thinking of themselves as a single big player in the energy market rather than a loose alliance of small players.

“We had done a terrible job telling our story. We had an inferiority complex,” Thomas told the approximately 20 people who attended the public event Monday.

“We’re doing things that our competitors don’t even think about. Why? Because we understand that those actions are transforming our communities,” Thomas said. “… We’ve done a better job of showcasing what rural Kentucky is capable of.”

Thomas said he thinks Danville-Boyle County is already heading in a similar direction through its partnering with 10 other counties’ economic development efforts to create Kentucky Crossroads, an alliance that works to market the south-central Bluegrass region as a whole to site selectors and businesses.

“Statistically, those 11 counties are doing better than anywhere else in the state. When you add it all up, it’s better than Jefferson County, it’s better than Fayette County,” he said. “Why? Because … the differences between the communities creates different opportunities for different types of (projects).” 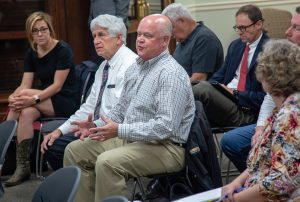 Thomas said the world of economic development always involves a lot of misses, when businesses don’t choose you for their project — that’s just the way things work.

“You don’t get every one of them,” he said. “It’s like baseball, if it’s me playing baseball, because you know what? I see a 90 mile-an-hour fastball and chances are I’m not going to touch it. But that one time I do touch it? I’m going to get something. I’m going to swing for the fences and by god, I might get something. But I’m going to miss a whole lot. And that’s really what economic development is about — it’s missing, but not losing through that.”

Another focus from Thomas was on telling a good story and representing Danville-Boyle County well to businesses and families that might move here. And the area has many assets it can point to as unique, he said.

“There’s communities across this country that would kill to have a Main Street” like Danville’s he said. And, he added, “You all do festivals and you do festivals well.”

Thomas said the Great American Brass Band Festival creates an atmosphere “that’s a Hallmark movie waiting to happen … That is a country hometown festival that is spectacular.”

Thomas walked the audience through a model he has developed for economic development called the “wheel of success,” which pushes leaders to focus on keeping seven different areas “inflated” well, but not “over-inflated:” organic growth, marketing, workforce development, quality of life, government, retention and recruitment.

On quality of life, for example, “Danville is checking the boxes on a lot of this stuff” because of its college, lots of green space and hospital. The city should be aware that as more and more shopping is done online, mall facilities will be going away and successful brick-and-mortar businesses will more and more be unique shops in culture-rich places like Danville’s downtown.

In the area of government, Thomas said, “We’ve got to show some cooperation between the city and the county. You don’t have to agree on everything, but you’ve got to agree to move forward together. … Take off the rearview mirror and throw it down.” 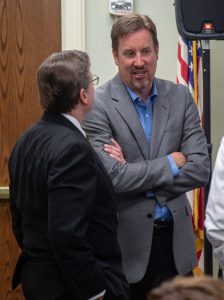 In the area of marketing, Thomas said leaders need to coordinate and focus on a very short list of targeted industries they want to bring to Danville-Boyle — at another point in the meeting, he told Danville Mayor Mike Perros he’d like to see leaders further refine a list they have of seven target industries down to just two. And then, the whole area needs a single spokesperson who can tell the right story.

Thomas summarized his points into a three-word phrase — “story, strategy, success.” Danville-Boyle must tell the right story and develop a good strategy using the “wheel of success,” he said.

“It we don’t have a story, the strategy doesn’t matter,” he said. “… At the end of the day, how does Danville figure out … the wheels? Where are we over-inflated? Where are we under-inflated?’

An unseeded “hometown girl” pulled an upset over a seeded player in singles in the girls 12th Region tournament Thursday.... read more