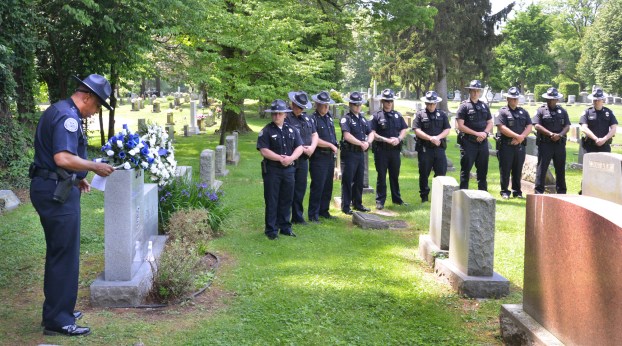 Danville Police officers James Ryan Sr., who was shot by a burglar on Nov. 3, 1968, and John T. Crum, killed in 1901 while on duty, were honored by the Danville Police Department Friday afternoon in Bellevue Cemetery during its annual memorial service for the fallen officers as part of National Police Week. 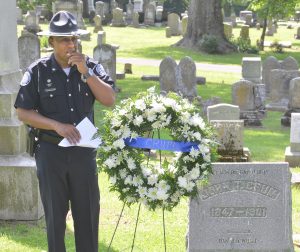 Danville Police Chief Tony Gray waits for officers to file into place before beginning a tribute to fallen officer John T. Crum who died in the line of duty in 1901. (Photo by Robin Hart)

Following the brief service, with members of the Danville Fire Department and city officials paying their respects, Shannon said at that time he was a sergeant and had just gotten home from working his shift when he received word that Ryan had been shot. “I can’t explain how I felt.”

He attends the annual memorial service for both officers. “I won’t forget them,” Shannon said.

Young police officers filed past Shannon, who is in his late 80s, and shook his hand. “I pray for these guys every night,” he said.

Also at the service every year is Ed Algan, 85, who had been hired as chief detective following Ryan’s death. He retired years later as a captain on the police force, he said.

After the memorial service, Algan was also shaking hands with the young officers and gave them this advice, “Just watch your backs.”

Sergeant Ryan succumbed to gunshot wounds received the previous night while responding to a burglary call with another officer at a business on South Fourth Street. The officers encountered a man with an automatic rifle. The suspect opened fire, striking Ryan six times. He was taken to Ephraim McDowell Memorial Hospital and died the next day.

Ryan was scheduled to retire two months before his death. He was survived by his son, who was also a member of the police department at the time of the shooting. Ryan’s daughter-in-law, Ruth Ryan, also attended the service Friday.

Ryan had served with the Danville Police Department for 26 years.

Officer Crum, 53, was shot and killed April 10, 1901, while investigating illegal alcohol sales at a local establishment. He had gone to the bar to serve a warrant on the owner for serving alcohol. When he entered the bar four patrons immediately left, leaving only Officer Crum and the owner. A struggle ensued between the two and the suspect shot Crum twice in the chest, killing him.

The man fled the scene but was quickly apprehended. He was convicted of Crum’s murder and executed in a public hanging on Dec. 20, 1901.

Crum had served with the agency for four years and was survived by his wife and 10 children.

Danville Police Chief Tony Gray escorts Ruth Ryan to the memorial service honoring fallen officers on Friday. Ryan is the daughter-in-law to James Ryan Sr., who died in the line of duty in 1968. Her husband, James Ryan Jr. was on the force at the time of the shooting. (Photo by Robin Hart)
You Might Like

Danville’s new central fire station, to be built downtown next to city hall, will include a courtyard, a memorial plaza,... read more