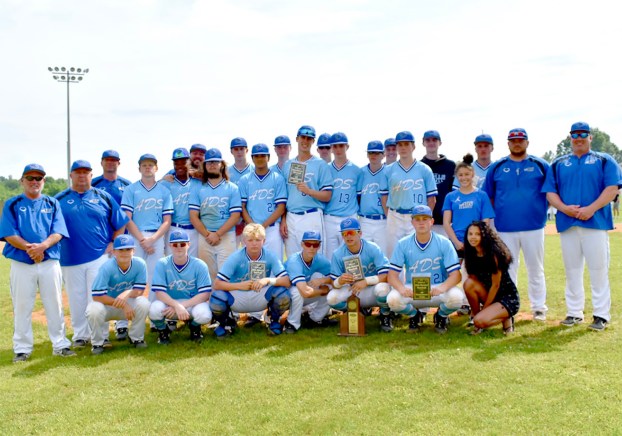 Photo by Wade Stanfield The Danville Admirals pose for a photo with their district championship trophy.

Admirals repeat as district champs with 9-4 win over Boyle

STANFORD — For the past week, Danville’s offense has — self-admittedly — struggled. 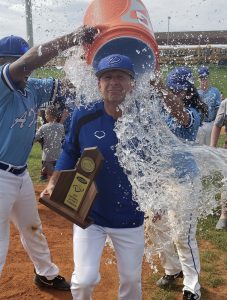 Photo by Wade Stanfield
Danville coach Paul Morse is dowsed with water by his players following the Admirals’ 9-4 win over Boyle County to claim the district championship Sunday.

The 12th region’s top scoring offense, which was averaging just over seven and a half runs a game, had scored a grand total of 18 runs in their past six games combined.

After both Boyle County pitcher Karson Thompson and Danville pitcher Ethan Wood threw scoreless first innings, the Danville offense opened up the scoring in the bottom of the second; and it was in rather bizarre fashion.

Danville’s Preston Barnes led off the bottom of the second with a single. The Ads then used back-to-back sacrifice bunts by Chrisitan Howe and Brady Morse to move Barnes to third with two outs.

Hunter Baxter then popped a 1-1 pitch toward the right side of the infield. On any other day, it would’ve gone down as an easy pop out to end the inning but the extremely gusty winds played tricks with the ball in the air, sending three Boyle County infielders sprawling. That ball would fall between the Rebel infield and hit the dirt, allowing Barnes to score and give Danville a 1-0 lead.

The Admirals would give Wood even more insurance runs in the bottom of the third.

After Thompson retired the first two batters to begin the third, he ran into trouble by issuing a walk to Danville’s Cayden Shaver — the state-leading 42nd walk he’s drawn.

Shaver was followed by Wood’s single to left. That set the stage for Barnes to, again, sting the Rebels.

On the first pitch of the at-bat, Barnes unloaded on a fastball to deep left field for a three-run blast. It was Barnes’ seventh home run of the season and put the Admirals up 4-0.

“I always focus on middle of the plate and outside and I’m always thinking right field. I come into every game with that mindset,” Barnes said. “I was looking for that pitch and luckily I got it.”

It was the start of a career day for Barnes, what he said was his first career four-hit day.

“He had a great day,” Danville head coach Paul Morse said. “We as a team had kind of been struggling the last few days swinging the bats, so that was good. We had a good round of batting practice before the game today and talked about how there’s no pressure today. It’s basically just like starting a new season, so lets come out and have fun and play hard. When this team is doing that, that’s when they are at their best.”

Danville’s offense continued to be at their best, adding two more insurance runs in the bottom of the fifth.

Shaver led off the home fifth with a single into left. Two batters later, Barnes reached base for a third time with a single. That was followed by Christian Howe’s single to center, plating Shaver’s courtesy runner Noah Goodman to make it 5-0.

After Brady Morse flew out for the second out, Hunter Baxter then rolled a ground ball through the middle of the infield, scoring Barnes’ pinch runner Blake Shelton to add on one more run and make it 6-0.

From there, Wood kept on rolling on the mound, striking out two of the three hitters he faced in the top of the sixth and allowing his team to throw even more runs on the board in the bottom half; and just like the second inning, it all happened with two outs.

After a strikeout and ground out to begin the bottom of the sixth, Jacob Crank roped his first hit of the district tournament — a ringing double off the left center field fence. One pitch later, Shaver doubled himself to plate Crank and make it 7-0. That signaled the end of the day on the mound for Thompson.

Thompson was replaced by Jack Briese, who began the at-bat to Wood with a wild pitch, allowing Shaver’s courtesy runner Goodman to move to third. Briese would end that at-bat walking Wood and putting runners on the corners. That allowed Danville to throw some base running trickery at Boyle for their eighth run.

With Logan Smothers courtesy running for Wood, he took off to steal second. As soon as Boyle catcher Connor Samons made his throw to second, Goodman took off from third to try to steal home. Boyle cut off Samons throw and attempted to throw Goodman out at home; the only problem was that the throw sailed over Samons head, allowing Goodman to not only score but Smothers to advance to third.

Smothers didn’t stay at third long. On a 3-1 count, Barnes again inflicted damage on Boyle for his fourth hit of the day. His double split the right center field gap, chasing home Smothers and giving Danville a 9-0 lead.

Boyle County, though, didn’t give up. Faced with a huge hole, the Rebels tried to battle back in their last at-bat.

With Wood still on the mound, Briese opened up the bottom of the seventh with a single. He was chased to third on Ethan Carter’s double, then the Rebels got on the board when Colin Carver singled to right to score Briese and make it 9-1.

Wood recorded the second out of the bottom of the seventh with a strikeout, but Cameron Yates greeted Wood’s first pitch fastball with a drive into the left field corner, scoring Carter and Carver and knocking Wood out of the game just one out away from a complete game.

“He pitched great. You can’t say enough about him. He’s a gamer,” Morse said. “Really we hadn’t decided until we pulled into the parking lot who was throwing today and he pitched and did a great job. You just can’t say enough about it. He was a bulldog out there and threw up zeros until that last inning when he ran out of gas.”

Wood handed the ball to Shaver on the mound but even with the pitching change the Rebels still weren’t done.

Boyle County’s Eli Glasscock bounced a grounder to second that the Admirals defense mishandled. That sent the Rebels fourth run home in the bottom of the seventh and trimmed the Danville lead to 9-4.

However, the Boyle rally was too little, too late. Shaver got the game’s final out on a fly ball to center field, sealing Danville’s 9-4 district title win.

“I thought we had a chance to score some runs there early. We got some guys on but had some base running mistakes and tried to get some bunts down and didn’t execute,” Boyle County head coach Kyle Wynn said. “But guys made some adjustments there at the end and that was good to see the bats come alive just to get that momentum going a bit.”

The win not only sealed a district title for Danville but also gave them a school record. In 104 years of Danville baseball, the Ads have never won 32 games in a single season. They accomplished that by beating their crosstown rival.

It’s not the end for either one of these teams, though. Both Morse and Wynn know that regardless of how this game turned out there’s still work to be done in the 12th region tournament.

“We did the same thing last year and guys we’re already talking about before I could bring it up,” Wynn said. Last year’s Rebels lost the district championship to Danville before rolling through the 12th region tournament to capture their second straight region title and advance to state.

“These guys know what’s going on and even last year’s state champion St. X didn’t win their district either so it’s all about region right now and moving forward and learning from our mistakes. It’s a grind; we’ve been through it before and we feel like if we execute like we have been we can run through that gauntlet again.”

Morse understands that there’s still more work to be done for his Admirals, too.

“We’ll enjoy this but we’ll get back at it Tuesday. We’ll just get ourselves prepared and get some guys that are a little tired and banged up healed up. We’ll just worry about ourselves and getting prepared, executing and playing our game.”

Danville and Boyle County will find out who and when they play in the region tournament Thursday night at the 12th region draw.