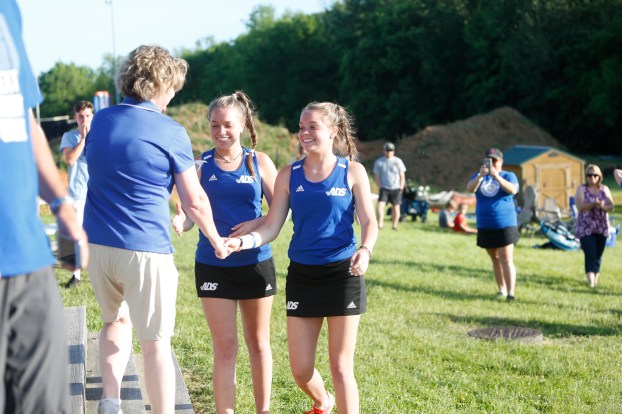 You couldn’t see the bull’s-eyes on their backs, but the three girls who were defending regional tennis championships Monday night could certainly feel them.

Still, they proved to be no problem for Jenna Akers and Lara Akers of Danville and Rebekah Trent of Mercer County, who won their respective brackets at the 12th Region Tournament for the second consecutive season. 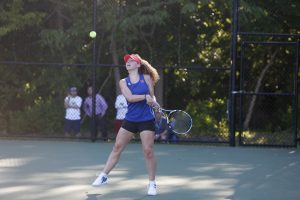 The Akers twins captured the doubles title, while Trent won the singles title and completed the Mercer girls’ run to a second straight team championship — one that was clinched before Monday’s championship round began.

So things looked pretty much as they did a year ago — but with some significant differences.

The Akers found themselves in a different position than a year ago, when they won the regional as freshmen who were unseeded in the tournament and ranked No. 2 within their own team. This year, they were seeded No. 2 and were getting opponents’ best shots throughout the season and in the regional.

“It was different circumstances, but it was really fun, and it was a great experience overall,” Jenna Akers said. “I feel like there was more pressure this year because we weren’t seeded last year and nobody was looking for us, whereas this year, everybody was looking for us because we’d won it. We just had to persevere and play it point by point.”

That was what they did Monday at John W. Bate Middle School, when they found themselves in a battle with Gracie Caton and Kiersten Bryant of Mercer County. The second set was squared at 4-all before the Danville duo won two straight games to close out a 6-3, 6-4 victory.

“We consistently kept hitting it back and forth across court, and that helped out a bunch,” Lara Akers said.

Two courts away, Trent was in a dogfight with Emma Calfee of Pulaski County in the girls singles final. The score wasn’t close – 6-0, 6-2 – but top-seeded Trent said it was a very competitive match.

“She was very consistent. She got every ball back,” Trent said.

Trent said the feeling of repeating as a regional champion was at least as good as when she won last year.

“It just makes it two times better,” she laughed and said.

However, she said she also felt the pressure of being a defending champ. 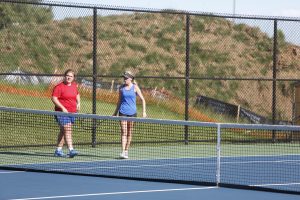 Kiersten Bryant, left, and Gracie Caton of Mercer County talk things over as they return to the court following a changeover Monday during the girls doubles final at the 12th Region Tournament. The Mercer duo lost to Danville’s Jenna Akers and Lara Akers. (Photo by Mike Marsee)

There was no pressure when it came to the team title. Mercer had clinched the title in Saturday’s semifinal round, just as it had a year ago.

“It felt really good,” said Caton, the Titans’ only senior. “Kiersten and I discussed it, how we’d already made it to state and we knew that our team had already won. It really just took pressure off our backs, knowing that we didn’t have to win but it would be great to win.”

It was a difficult road back to the top of the regional ladder for Caton and her teammates. Caton is still coping with the loss of her boyfriend, Mercer classmate Marcus Lewis, who died May 4 in an automobile accident in Madison County.

The team had to deal with a coaching change in which Caton’s father Nick was promoted from assistant coach to head coach right before the start of the season, and there were other adversities along the way as well.

“We’ve been through a lot of struggles this year and we’ve overcome all the obstacles, and it really just shows how much work these girls are willing to put in to win,” Gracie Caton said.

“We have been through a lot this year,” Nick Caton added. “Going into the season we knew that because we won the region championship last year we were going to have a target on our back, and with everything else, the adversity we’ve had to face throughout the season, it just makes it that much sweeter.”

Gracie Caton said the victory also is sweet because there was doubt that the Titans could win for the second straight year with a young team that has had only one senior in each of the last two seasons.

“I think it just adds a lot of pride to our team,” she said. “A lot of people were underestimating us this season, they thought we couldn’t do it again. And I thought we showed them that even though we’re a young team we’re a very good team.”

Boyle County took home both regional runner-up trophies, finishing second to Mercer in the girls standings and to Somerset in the boys standings. The Rebels qualified four players for the state tournament.

Gunner Floyd and Ethan Willoughby of Casey County played in the boys doubles final, falling 6-2, 6-1 to Eric DeMunbrun and Jonathan Nickell of Somerset.

The top four singles players and doubles teams in each bracket advanced to the state tournament, which begins May 30 at the University of Kentucky. 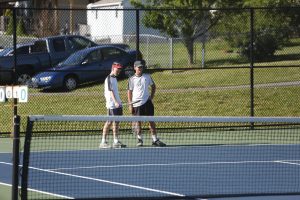 Gunner Floyd, left, and Ethan Willoughby of Casey County confer during their match Monday in the boys doubles final at the 12th Region Tournament. Floyd and Willoughby lost to Somerset’s Eric DeMunbrun and Jonathan Nickell. (Photo by Mike Marsee)

Jenna Akers, front, of Danville moves in to return a shot as Lara Akers looks on during the girls doubles final Monday at the 12th Region Tournament. The sisters won in straight sets to capture their second consecutive regional title. (Photo by Mike Marsee)
You Might Like

Rebels blow out Franklin County thanks to big first inning