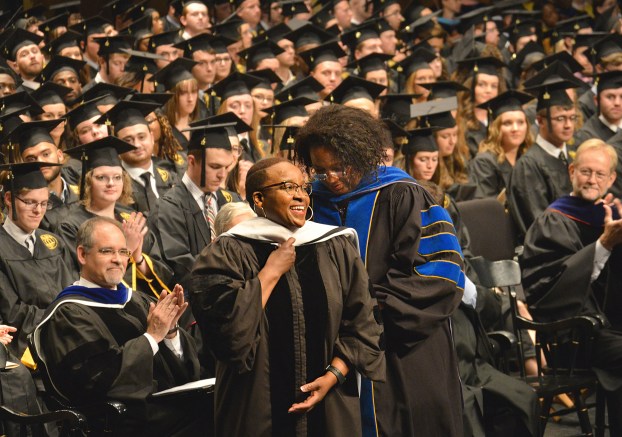 The Rev. Canon Nontombi Naomi Nozizwe Tutu, daughter of Archbishop Desmond Tutu, was conferred with the honorary degree of Doctor of Humane Letters during Centre College’s graduation ceremony Sunday afternoon. Associate VP for Diversity Affairs and Special Assistant to the President Andrea C. Abrams, who is also a professor of anthropology, performed the investiture. (Photo by Robin Hart)

Centre College held its 196th commencement service Sunday afternoon — 200 years after the college first opened its doors in 1819. There were 327 graduates from across the United States, as well as from China, Canada and Vietnam in the graduating class this year. 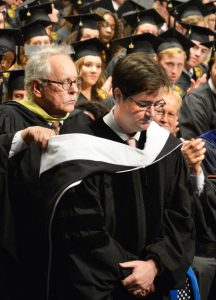 The Rev. Canon Nontombi Naomi Nozizwe Tutu and Stuart Wilson Sanders were conferred with honorary degrees of doctor of humane letters before students walked across the stage at Norton Center for the Arts to receive their Bachelor of Arts and Bachelor of Science degrees.

Tutu grew up in apartheid South Africa and has spent her life working for human rights. She is also the daughter of Archbishop Desmond Tutu, who won the Nobel Peace Prize for his Anti-Apartheid work in South Africa, according to the school’s commencement program. Her son, Mpilo Ngomane was sitting behind Tutu as a member of Centre’s class of 2019.

Tutu has been a development consultant in West Africa and program coordinator for programs on race and gender and on gender-based violence in education at the African Gender Institute at the University of Cape Town.

According to the program, Tutu taught at the universities of Hartford and Connecticut and at Brevard College, and has been program coordinator for the Race Relations Institute at Fisk University.

Sanders gave the commencement address and is a member of Centre’s class of 1995. Sanders is the history advocate for the Kentucky Historical Society and the author of four books. He is the former executive director of the Perryville Battlefield Preservation Association, which has worked to preserve and interpret Kentucky’s largest Civil War battleground.

The city will receive the proposed budget, with few changes from the draft, on May 28, Ron Scott said last... read more