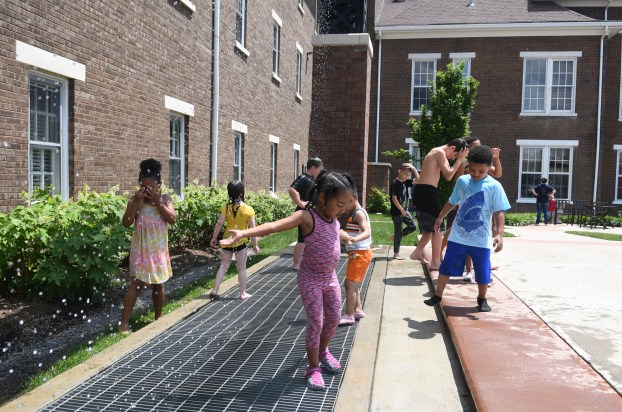 Children play on inflatable slides and other attractions Saturday in Weisiger Park. (Photo by John Scarpa )

Wet and wild weekend at Weisiger

The Hope Network in Danville sponsored an appreciation event for its mentors and mentees on Saturday, May 18. The event was held in Weisiger Park in front of the Boyle County Courthouse.

“Thanks to all the churches and elementary schools for allowing us to play a vital role in impacting lives … one kid at a time,” a post from Hope Network about the event stated. “Thanks to all our mentors for your time you spend each week with your mentee. Heaven is eternally grateful and so are we.”

For more information about the Hope Network, visit facebook.com/hopenetworkky.

Matt and Lincoln Murray throw foam tomahawks at a target in the park in downtown Danville on Saturday. J(Photo by John Scarpa )

Children play on a giant foosball set in the park in downtown Danville on Saturday. (Photo by John Scarpa )

Colwyn Reardon, age 7, blocks a goal on a giant foosball set in the park in downtown Danville. (Photo byJohn Scarpa)

Reuel Watson, age 4, and Jaxson Waide, age 5, flavor their snowcones. (Photo by John Scarpa )
You Might Like

Potatoes should be plentiful on the Kentucky School for the Deaf campus when it’s time to harvest. On Thursday morning,... read more