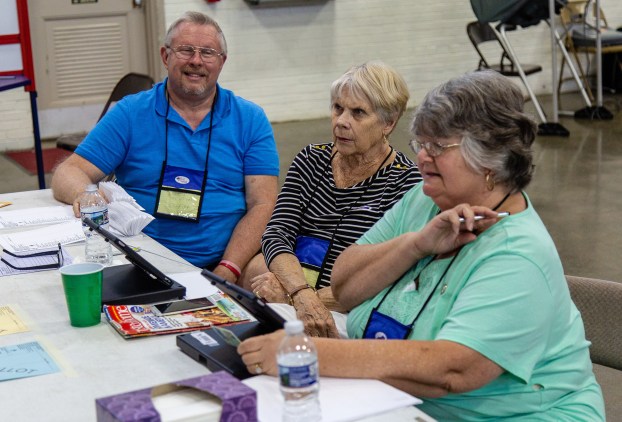 Ben Kleppinger/ben.kleppinger@amnews.com SS. Peter and Paul precinct workers, from left, Charlie Newton, Sue Sullivan and Becky Wesley, have been working together every election since 2012. Wesley has been an election official since 2002; and Sullivan has been one since 2004. Not pictured is the fourth member of their precinct corps, Jim Baker.

Boyle County voters voted the same way the commonwealth did in every primary election Tuesday.

Gov. Matt Bevin carried Boyle County and Kentucky for the Republican nomination; Attorney General Andy Beshear did the same on the Democratic side.

Bevin got 1,134 Republican votes in Boyle, while Beshear got 1,212 Democratic votes.

According to the Kentucky State Board of Elections, Boyle County’s voter turnout was 21.85 percent, with 4,897 ballots cast.

Voter turnout was already close to the 20-percent mark for the SS. Peter and Paul precinct with more than five hours left before polls closed Tuesday.

Precinct Clerk Becky Wesley said she has worked the SS. Peter and Paul precinct since 2002, when voters still came to vote at the Catholic Church on Main Street, and turnout has always been stronger than elsewhere in the county.

“They’re just dedicated folks, that’s what it is,” she said. “They’re dedicated voters.”

Asked why she has done the job for so long, Wesley responded, “I was just called and asked if I would and I thought I would try it and I liked it.”

She votes absentee every election so she can work at the polling place. She hasn’t voted in her own precinct in so long “if I was to go to my polls and say, ‘Hey, I’m Becky Wesley,’ they would say, ‘No you’re not,'” she said, laughing.

Wesley and her three fellow precinct workers — Sheriff Charlie Newton, Judge Sue Sullivan and Judge Jim Baker — have all been working together every election since 2012. They pride themselves on having a fantastic potluck with their sister precincts every year — and sharing their breakfast, lunch and dessert goodies with voters as they come through.

There weren’t any lines Tuesday afternoon at the armory, which served as a new location for three precincts that used to be located at the Salvation Army gym on South Fourth Street. The voters that were strolling in were able to make quick work of their ballots.

As an older voter entered, Wesley greeted her warmly. “May I see some ID, please?” she asked, joking, “To make sure you’re 21.”

Other primary results are:

Wet and wild weekend at Weisiger

The Hope Network in Danville sponsored an appreciation event for its mentors and mentees on Saturday, May 18. The event... read more