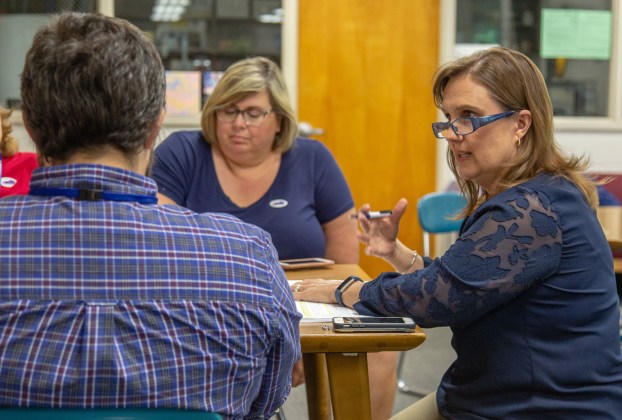 Danville Superintendent Tammy McDonald leads a special called meeting of the Danville High School council Tuesday, which began the process of selecting a new principal for the school. (Photo by Ben Kleppinger)

The Danville High School council has set a tentative timeline for selecting a new principal. Following the council’s special called meeting Tuesday, Superintendent Tammy McDonald would not say why she declared a vacancy in the principal position, meaning current Principal Haley Ralston will not be returning in that position next school year.

Asked if she would ever be able to state on the record why the vacancy was declared, McDonald shook her head.

Asked whether any other positions at the high school were now open as a result of whatever led to declaring a principal vacancy, McDonald said she can’t talk about personnel. She also explained that many people have not yet received notification of renewal for their position next year, but that doesn’t necessarily mean they won’t be coming back.

“People are connecting things that are not connected,” she said.

The Danville High School principal position was posted Tuesday, the same day the school council met. By law it must be posted for at least 15 days but can be kept open longer or reopened if the council chooses, McDonald said during the meeting.

The council set a tentative schedule for the principal selection process as follows:

• May 28 — a special called council meeting expected to last more than three hours, during which the council members will undergo required training on the principal selection process, and settle on a list of possible criteria of qualities they want in a principal.

• May 29 — an all-call could be sent out to parents and teachers, informing them a survey will be made available listing all the possible criteria. The teachers and parents will be asked to choose which criteria they feel are most important.

• May 30 — the survey could open for answers and remain open until June 4.

• June 5 — the council could hold another special called meeting to review the survey results, choose interview questions based on the highest-priority criteria and begin screening applicants.

• June 9 — the council could hold interviews that Sunday afternoon, possibly for the top three candidates for the position.

Ralston has not responded to requests for comment on the situation. She has been principal at DHS since November 2016.

In-school health clinic approved by Danville Board of Ed

The Danville Board of Education approved an amended agreement with Danville Pediatrics Monday to provide in-school health clinic services. The... read more