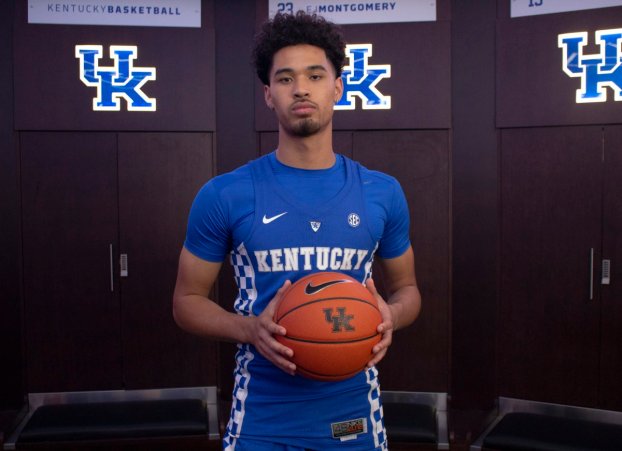 “Johnny is a great shooter. He was the best 3-point shooter on the adidas Gauntlet circuit last summer,” said Peek.

The 6-7 Juzang averaged 23 points and 6.9 rebounds per game for Harvard-Westlake (Calif.) in what was his junior season before he decided to reclassify to the 2019 class and picked UK over Virginia and Oregon. His commitment gave coach John Calipari a needed deep shooting threat.

“I asked him once how many 3’s he puts up a day and he told me he tries to shoot anywhere from 300 to 500 3’s when he’s in the gym,” Peek said. “Between him and (signee) Tyrese Maxey, I think this will be a very good outside shooting team next year at Kentucky.”

Since Juzang reclassified to this year’s recruiting class, he’s not had a chance to interact that with much with UK signees Maxey, Kahlil Whitney, Dontaie Allen or Keion Brooks. However, Peek doesn’t think that will be a big issue because of his personality.

“Johnny is a pretty laid back kid who gets along with everyone, so I don’t see him having any issues fitting in with the other guys in the class,” Peek said. “In terms of how he’ll fit on the court, I think his minutes will be limited and he might be used as a reserve player who can knock down the 3 and give the starters a little breather.”

Not only does Kentucky have Maxey, a top 10 point guard, joining the team but guards Ashton Hagans and Immanuel Quickley both return. Hagans started most of last season and Quickley got extensive playing time. That year of experience and maturity would figure to give both an edge over Juzang.

“Johnny will definitely need to get stronger but he has a good frame and has always been so disciplined playing under the tough coaches within the southern California Compton Magic AAU program, I think he’ll adjust well,” Peek said. “His jump shot is the key and if he’s knocking it down early and consistently, he will see some good minutes.

“Looking at Kentucky’s guard-heavy class I thought he was a lock for Virginia but there’s something about coach Cal and these kids wanting to play and learn from him that seals the deal in the last minute. Maybe he’ll redshirt or be more of an emergency player similar to how Duke used Joey Baker this past year.

“Or is this the year Kentucky and coach Cal play some small ball? The way the class is shaping up, next year will be interesting with all the guards coming in.”

Like most incoming players, Peek says Juzang will need work on his defense and speed.

“It’s one thing to defend high school guards in California but it’s going to be on a whole new level once he faces the experienced guards in the SEC,” Peek said. “Luckily he’ll be going head to head with some of the quickest guards in the country in practice and that will really help him.”

By LARRY VAUGHT Contributing writer For the seventh time in the last nine seasons, coach Rachel Lawson has the University... read more