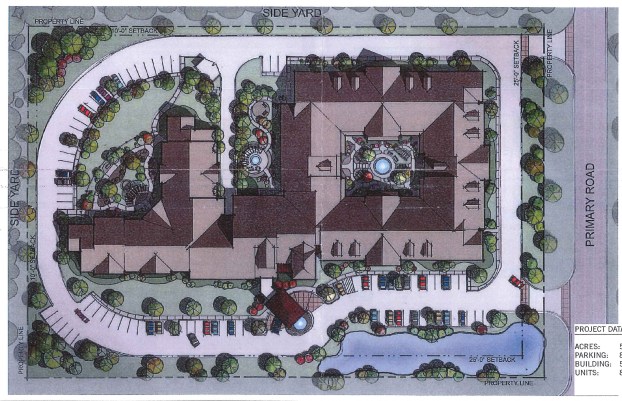 A concept plan shows a top-down view of what a new assisted living facility in Danville could look like. The company building the facility hopes to break ground this summer and it could be open by the summer or fall of 2020. (Image from DMK Danville Assisted Living)

A new assisted living facility could be open along the Danville bypass in late 2020. 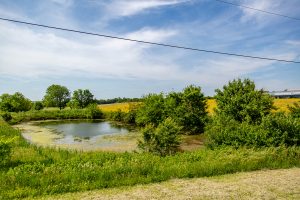 The DMK assisted living facility project is planned for a 6.3-acre property on Davco Drive that fronts the Danville bypass. (Photo by Ben Kleppinger)

The project will involve an investment of between $13.5 million and $14 million and the facility will employ about 60 people full-time when operational, said Ross Oberhausen, director of development and client operations for DMK Development Group.

DMK is constructing the approximately 60,000-square-foot facility to house 81 residents — 56 of them in a personal care assisted living area and 25 in a “completely secure” memory care unit for elderly residents with memory problems, Oberhausen said.

DMK could break ground on the industrially zoned 6.3-acre tract on Davco Drive in front of Kentucky Solid Surface by mid-July or early August. Construction is estimated to take between 12 and 14 months, he said.

The Danville facility, which will be managed by Louisville-based Trilogy Health Services, is part of a larger effort by DMK to build multiple assisted living facilities.

“We looked at probably 25 different markets throughout Indiana, Ohio and Kentucky. We knew we wanted to start our first three in Kentucky,” Oberhausen said. “… We identified the three first ones being Bardstown, Danville, Winchester … it just so happened that the Danville planning and approval process has gone quicker than any of the others, so we’re excited to get going with it.”

Oberhausen said DMK plans to take the project out for bids in June “and we’re looking for local (subcontractors) to bid on our project.” 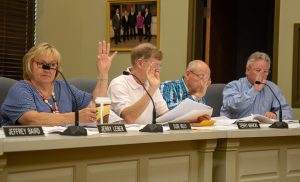 P&Z Director Steve Hunter said a 100-foot “green belt” will be maintained on the side of the property that fronts the Danville bypass. A retaining wall will be placed on the west side next to Kentucky Solid Surface, Oberhausen said.

The assisted living facility will be similar in feel to what exists now at Morning Pointe on Perryville Road, Oberhausen said. It will have an internal courtyard with a 40-by-40-foot canopy space and putting green. The memory care side will have a walking path in an outdoor space because many residents in memory care prefer to do a lot of walking, he said.

Inside, the main community area will have a “Main Street” area with a bistro, a living room and dining space, a salon and a doctor’s office, making it possible for doctors to come out and provide “concierge services” on-site instead of residents traveling to a doctor’s office.

The property already has a retaining pond on the east edge by the bypass, which fits with DMK’s plans perfectly; it plans to build a walking path around the pond for residents to use, Oberhausen said.

“We lucked out with Ms. (Nancy) Davis’ property here,” he said. “… this was the first property I saw in Danville I liked. I spent three weeks looking at other properties and wasted time. We ended up back on this property again. It just fit the whole building. … It was like it was just meant for this property.”

Oberhausen said the goal is to provide care for seniors in their own community and near family.

“If you don’t have the facilities for seniors, you’re losing your seniors to the larger metropolitan areas,” he said.

Danville resident Sarah Vahlkamp spoke in favor of the project during Wednesday’s public hearing. She noted this would be the third assisted living facility in the area, including the Willows in Harrodsburg — also a DMK-developed facility.

“It’s a real interesting phenomenon that’s happened in our area,” she said. “… Folks like me — we’re becoming more and more a part of this community. And how it affects our general housing — I just think it’s long-term thinking that we have to realize what’s happening nationwide as well as right here. And I’m glad you all are coming in.”

“We have a saying about the aging population and it’s called the Silver Tsunami,” Oberhausen said. “10,000 people turn 65 every day in this country and will for the next 11 years. Statistics show people really don’t need our services until 80 or 85, so on top of that 11 years, add another 10-15 years on top of that.

Roger Fox said it took some intense research, soul-searching and praying, but he has decided to leave Shepherd’s House as... read more