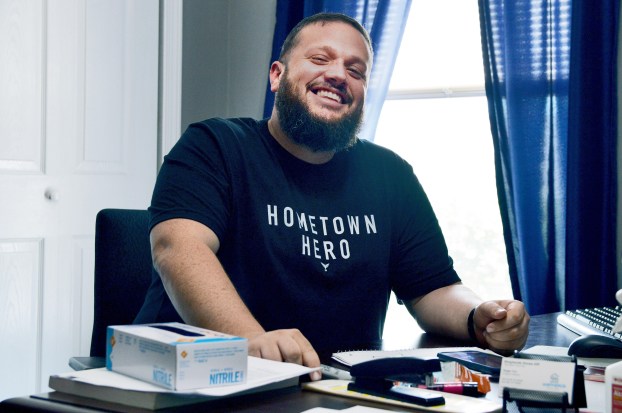 Roger Fox, director of the Shepherd's House program in Danville since 2017, is leaving to take a job with another drug recovery organization, Willisburg-based Isaiah House. (Photo by Bobbie Curd)

Roger Fox said it took some intense research, soul-searching and praying, but he has decided to leave Shepherd’s House as its program director. He has accepted a position with another treatment facility, Isaiah House in Willisburg, as an executive assistant.

“We’ve been in discussions for about a week or so about it now,” Fox said. “It was a lot of thinking and praying, talking to people who I trust and getting feedback.”

Fox has headed the Shepherd’s House Intensive Outpatient Program since the summer of 2017. The program was put in place by the Boyle and Mercer fiscal courts to provide counseling, job training and more to former inmates of the local jail with drug addiction problems. As of April, 57 people had graduated from the program over its approximately 2-year lifespan. The program is estimated to save the counties more than $10,000 most months by allowing inmates to be released from the jail while they participate, according to monthly reports from Fox.

Fox said the deciding factor for him was the opportunity for growth within his area of study. He will be in the social work program this fall at Campbellsville University in Harrodsburg.

“Having the ability to learn from guys like Mike Cox and Kevin Horn, the president and vice president (respectively) of Isaiah House” will be priceless, Fox said. “And being able to do my practicum at work, it’ll be an amazing experience.”

He said his loyalty will always be to the Shepherd’s House, for what it gave him. But the next step in his career is to learn from others, “And if I can have the chance to do that with master-level social workers, getting that experience, then it’s a no-brainer.”

Kyle Nowka was on-hand Tuesday in Danville; he’s the executive director of mental health for Shepherd’s House. “Actually, we are really happy about it,” Nowka said. He said that’s what programs like Shepherd’s are all about — personal growth.

Nowka said Shepherd’s House commends Fox for what he was able to do in such a short time as program director. “He graduated from the program and hit the ground running. You don’t always find that … We’ve been lucky to have him,” Nowka said.

Tuesday, Fox had already begun helping to interview for a new director. He plans for it to be a “seamless transition” in the community.

“I will help find who the next director is. I’ll make sure we go out and meet every judge and every magistrate. Kathy Miles (with the Agency for Substance Abuse Policy), and all those people who are so important to us. Shepherd’s House could never do this on its own — no treatment center can do it on its own,” Fox said. “Not here, not with the population.”
Fox said it took the entire community buying in to make Shepherd’s House work.

“That’s what we’ve done these last two years … make it about the community. And the community has embraced us. The newspaper embraced us. ASAP, Hope Network, down to the judges,” he said. “Judge (Jeff) Dotson has always been extremely gracious to me in his courtroom, allowed me to do my thing and find clients when appropriate, speak up when someone needs to be advocated for.”

Fox said all the strides Shepherd’s House has achieved have been “because of where we’re at as a community. I know that whoever is the next director will continue that. I”ll make sure of it.”

But for now, Fox is still looking into the near future — and that brings the second annual bike give-away he has organized. “We’ll be giving 100 bikes away to kids — we’re working on it, we’re close to 100. I just got a $500 check in the mail this morning for bicycles.”

June 14 will be his last day as program director of Shepherd’s House.

“I love the Shepherd’s House, that’s my No. 1. It saved my life, and it gave me the opportunities I have today. It was difficult to make the decision to leave,” Fox said. “But, June 14 will be a good day to step back and look at what we’ve done here … And have the next person to replace me right here, ready to move forward.”

Jerod Thomas, president and CEO of Shepherd’s House, said it’s bittersweet. Of course he wants Fox to follow his journey. “But we hate to lose him.”

“This has been hard on both of us,” Fox said, when asked how long he’s known Thomas. “He’s like a father to me.” They met when Fox was a client of Shepherd’s House in Lexington, after being released from prison.

“He’s like a son to me,” Thomas said. “Other guys who helped raised him in the treatment world, we hate that he’s going.”

Thomas said Fox’s job was to leave the program better than he found it, and he thinks Fox has done that.

Also, Thomas says a change like this is a good reminder that the program is more than a face that can drive it. Fox did an amazing job getting the program on the community’s radar, as well as creating bridges to continue the work with other groups’ support, he says. But now it’s time to move on, hopefully to another personality who can add another layer to helping the community fight addiction.

“Nobody remembers me being out at Boyle County Detention Center. Know why? Because Tannith (Wilson) is better than me,” he said, referring to the substance abuse program director there now. “And that’s what we want.”

Thomas said Shepherd’s House is a local program. “It’s not about Jerod Thomas or Roger Fox, it’s about a community coming together and saying they’ve had enough. The most important thing is to ensure what we stand for. Roger’s running around sober because of the Shepherd’s House.”

For more about the Shepherd’s House, visit www.shepherdshouseinc.com‎. To reach Jerod Thomas, call (859) 537-8680.

Danville City Engineer John Cassel deals with issues from how to stabilize an old sinkhole in someone’s backyard to keeping... read more