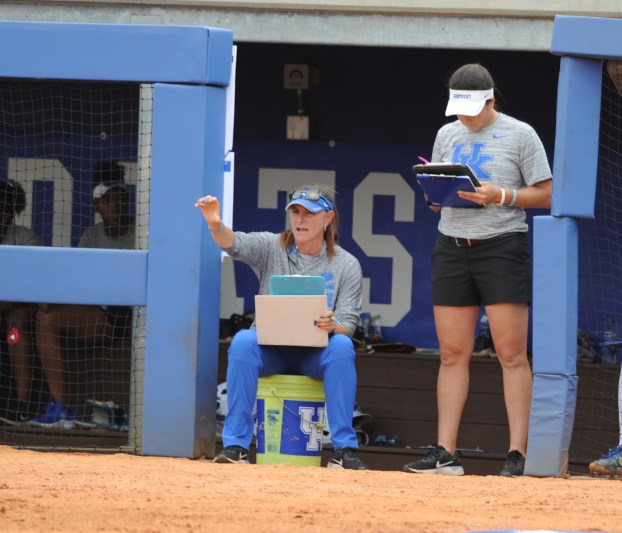 Rachel Lawson is 432-275 in her 12 seasons as UK’s softball coach. She has more wins during her career than the team had in all the years before she arrived. (Photo contributed)

For the seventh time in the last nine seasons, coach Rachel Lawson has the University of Kentucky softball team back in a Super Regional.

Kentucky is 36-22 after Sunday’s 11-1 win over Virginia Tech. Lawson is now 432-275 in her 12 seasons at Kentucky. That not only makes her UK’s winningest coach but she also has more wins than Kentucky had total when she took over the program in 2007.

Lawson takes nothing for granted and appreciates the growth the program has seen, including the new John Cropp Stadium and indoor hitting facility. After Saturday’s win in the NCAA, she thanked media members for coverage of the team and also praised fans for their support — including three capacity crowds over the weekend.

But Lawson sets a high bar for herself and her team. She has a passion for winning and is a tireless worker who has a knack for driving her players but also bonding with them at the same time.

She was in a jovial mood Sunday after her team, which again played one of the nation’s toughest schedules, got to the Super Regional, which has become the standard for her team.

Lawson joked that “me and Cal (UK men’s basketball coach John Calipari)” have the same pressure on them — her to make the World Series, Calipari to get to the Final Four.

“The pressure’s on. I can’t believe (UK athletics director) Mitch (Barnhart) hasn’t fired me yet (for not getting back to the World Series),” Lawson laughed and said with Barnhart standing not far way.

“Perhaps it’s time for Mitch to cobble together another lifetime contract (like Calipari got).”

In her own way, she could be even more deserving than Calipari — and that’s no knock on Calipari. Every SEC softball team made the NCAA Tournament again (and six of the 16 Super Regional teams are from the SEC). Calipari has pleaded for SEC basketball teams to improve but Lawson’s team faces a loaded conference slate annually.

Lawson also feels obligated to win for the fans. She probably believes in the same players’ first philosophy that Calipari does, but she also understands what Big Blue Nation means. She’s always available for autographs and pictures with fans after games and makes sure her players are, too.

“I love the BBN,” Lawson said Sunday before needing a short pause to make sure she didn’t cry.

That’s real emotion because it’s not unusual to see her cry when she has to talk about seniors leaving the program. Once she regained her composure, she continued to praise BBN.

“If they weren’t invested in winning, we wouldn’t have all this. So their expectation level at Kentucky is to win championship. Even my first year when we hosted (a regional), the first time we went to Supers and we hosted (Supers) and we lost, I felt like I let down the whole BBN. And I feel like that every single time we lose. I feel like we let down the grounds crew and stuff. So I’m used to feeling that, but nobody will ever put more pressure on themselves to succeed than I will,” Lawson said.

Next came the love for her players that almost made her cry again.

It could be a daunting task against Washington, which has won 10 straight games and is 48-7 overall — with three of the losses coming against No. 1 UCLA. However, Washington did lost to Utah, a team UK beat 13-2 early in the season. Washington’s Taran Alvelo is one of only four Division I pitchers this year with 100 or more wins and the Huskies’ pitching staff has a 1.55 earned run average — one of the best in the nation.

However, Lawson seems to have UK’s pitching peaking at the right time and the offense has been good all year.

“She just tells us always to do what we do best,” junior pitcher Autumn Humes said. “That’s just what we’ll go do and if we play our best, we feel like we can beat anybody.”

Text and photos by MIKE MARSEE Contributing Writer [envira-gallery id=”51316″] In one of the toughest track and field regions in... read more