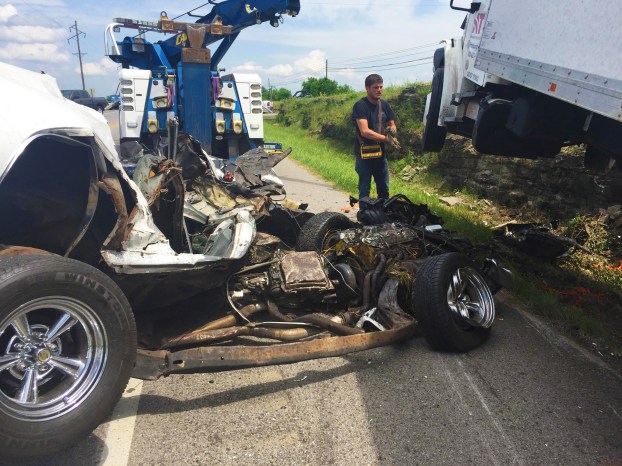 (Photo courtesy of Mike Wilder/Boyle County Emergency Management) A wrecker driver works to prepare a box truck, seen at left, to be towed off the scene of a fatal accident Thursday afternoon. The white passenger car seen in the forefront somehow traveled into the westbound lane, causing the truck to end up on top of it due to the impact.

Thursday afternoon, local authorities reported to the scene of two fatal incidents on Boyle County roadways, back to back.

First, around 2 p.m. a collision at the intersection of Parksville Crosspike and Perryville Road/U.S. 150 caused officials who were already together at the monthly 911 meeting at city hall to respond. Emergency Management Director Mike Wilder said Gerald Kidwell, 52, of Lincoln County was killed instantly.

Boyle County Sheriff Derek Robbins said Kidwell’s passenger vehicle, headed west towards Perryville, traveled over into the eastbound lane, where a box truck collided with it.

“It was almost like a T-bone — the white car was almost sideways,” he said.

The box truck ended up on top of the white car due to the force of the impact. The driver of the truck was transported to Ephraim McDowell Regional Medical Center, where he was treated and released. Authorities did not have the truck driver’s name Thursday evening.

“There was absolutely nothing he could’ve done,” Robbins said. Wilder said there were marks on the road where investigators could tell the truck driver attempted to leave the roadway and avoid the collision. The driver was en route to a local dealership from Louisville, to deliver a load of tires.

“This one was as bad as I’ve seen for some time,” Wilder said. He and Robbins both said it was hard to even recognize the white passenger vehicle as a car.

Traffic was backed up for hours as authorities worked to clear the scene, as well as to fit in a large wrecker that was able to pull the box truck out.

Not too long after the scene was cleared from the first wreck, a second call came in around 4:30 p.m. about a vehicle that left the roadway on Ky. 33.

“Witnesses say she was driving erratic,” Robbins said. Someone had followed her from U.S. 27 in Garrard County onto Ky. 33.

“At some point, she was traveling north toward Burgin (on Ky. 33) and evidence shows she left the roadway and traveled in the ditch line for an extended period of time,” Robbins said.

He said there was no evidence of braking. The vehicle eventually hit a drain culvert and flipped multiple times, and landed near the pumping station on Buster Pike.

Authorities were not at liberty to release the driver’s name Thursday evening because they still needed to notify family.

Robbins said no other cars were involved. He said witnesses who were at the scene said it appeared she was instantly killed.

“Speed probably was a factor, based on how far she traveled off the roadway.” He said speed is difficult to estimate when there are no brake marks, but witnesses did say she was traveling over the speed limit.

“At this time, we just don’t know of any other contributing factors. We can’t rule anything out at this point,” Robbins said. He said it could’ve been alcohol or drug related, or a medical condition — there’s no way to tell yet.

“Both of these wrecks are just so random and just … Most of the time there’s a clear-cut answer. But both of these just have odd circumstances, especially to be within three hours of each other.”

The Heart of Danville hosted a “pop-up park” this past weekend in the parking lot next to the Derby Shoppe... read more