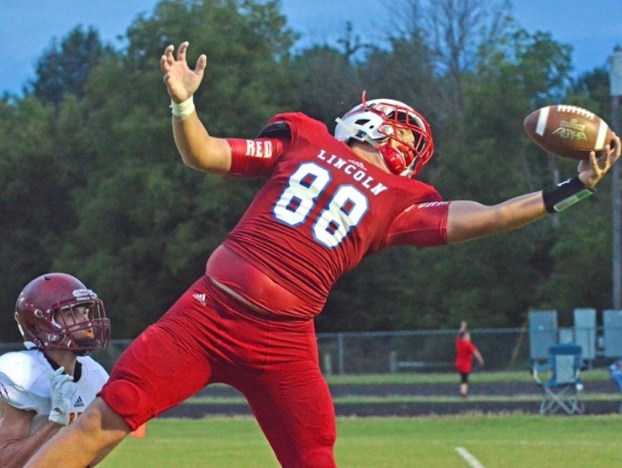 Sawyer Carrier is incorrectly referred to the history of local walk-ons at the University of Kentucky. Kevin Deatherage of Lincoln County was also a walk-on for the Kentucky football team. Carrier will be the second Lincoln County player to be a preferred walk-on at UK when he joins the program this fall.

STANFORD — He never really went to University of Kentucky football games growing up, but he always watched the Wildcats play on television and kept up with how the program was doing.

Now Lincoln County senior Sawyer Carrier is going to get a chance to be part of the UK football program as a preferred walk-on. He’s a 6-5, 250-pound tight end/defensive lineman who had 15 catches for 253 yards and three scores as a high school senior.

However, he knows he’s destined to be an offensive lineman in college and is fine with making that transition. Kentucky assistant coaches John Schlarman and Dean Hood told him they were looking for players with his “build and athleticism” to add to the program.

“I went to a (spring) practice and coach Hood told me just to walk around with the offensive linemen and not to focus on the tight ends or defensive linemen. He wanted me to think only about being an offensive lineman,” Carrier said. “Almost every coach I have talked to has told me that is a transition I need to make if I want to be successful in college.

“In high school I enjoyed playing tight end. Who wouldn’t like catching touchdowns? There was still a lot of blocking involved. The only negative with being in the offensive line is not catching touchdowns but I will still be able to help others score and that’s fine with me.”

Carrier admits mainly “smaller schools” were interested in him before the opportunity to join Kentucky as a walk-on developed where he apparently will be the first Lincoln County player on the roster since Jason Todd about 30 years ago.

“I had one college coach tell me if I had gone to a school with a bigger football program that won more like Boyle County I could have gone anywhere in the country with my size and athleticism,” Carrier, who also played basketball and baseball, said. “But I could never have left Lincoln County.

“Being from Lincoln County and going to play for UK is huge for our county. I hope all the young kids see this and know they have an opportunity to do the same thing.”

He’ll report to UK Aug. 1 and start the process of trying to work his way up the depth chart. It’s not easy for a walk-on but former Walton-Verona offensive lineman Cole Mosier went from walk-on to starter. So did Lexington Catholic receiver David Bouvier.

Carrier also wants to be a civil engineer, a major that few full-time Division I football players attempt.

“I hope I can be one of the only ones to make it work,” Carrier said.

“I always thought I would be good to go when the therapy finished. I got a plate and screws put in the leg but it’s fine now,” he said. “It was not a real difficult rehab. At first my leg was shaking uncontrollably but after that it was pretty easy and I knew I would get back to playing baseball like I have been.”

By LARRY VAUGHT Contributing writer Kentucky has found a potential backup quarterback with extensive playing experience who has a UK... read more