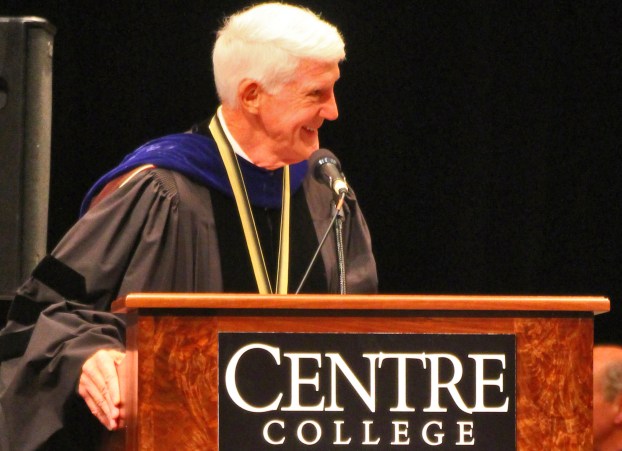 At the conclusion of what will be 22 years of service as president of Centre College, John A. Roush plans to retire on June 30, 2020.

In making the announcement to the campus community, Roush said that he and his wife, Susie, “have talked, often, that retiring a year following the College’s bicentennial would be the best timing.” Founded in 1819, Centre marks 200 years of service this year. He went on to describe his time as president as “a deeply personal, hands-on and time-intensive experience.” He added, “Being at the College has been a blessing to us and our family, and we count it a privilege to serve this institution.”

Roush, who will turn 70 on his first day of retirement on July 1, 2020, observed, “Our grandchildren are not getting any younger, and neither are we. Life is short, and we have family and friends waiting for us.”

He says there is much work to be done over the next 13 months. “Our plan is to finish strong and keep working hard up to the very last day. That’s what Centre needs and deserves, and that’s how Susie and I have always chosen to live our lives,” he added.

“John Roush will be viewed as a giant when the history of Centre is written,” said J. David Grissom, from his perspective as Centre’s previous Board of Trustees chair for 22 years and now a current life trustee. “For more than 20 years, John has been a force of energy, imagination, integrity and quality at the highest level,” Grissom said. “He and Susie will be greatly missed by the entire Centre community, but especially by the students, past and present, who have benefitted from their warm smiles, their genuine caring and concern and their constant support.”

Mark E. Nunnelly, current chair of the Board of Trustees, credits both John and Susie with “dramatically changing the trajectory of Centre College in all ways.” He points in particular to “the evolution of the college’s student body, its physical plant, its programs — here and abroad — and its position among national liberal arts colleges.” While Nunnelly admits that he will miss John and Susie greatly once they leave, “we will be forever thankful for the many changes they have made that will continue to accelerate our promising future.”

Crit Luallen, current secretary of the Board of Trustees, shares the sentiment. “John Roush has been a transformative and inspirational leader,” Luallen said. “He and Susie have poured their hearts into the presidency, and they will leave Centre a markedly better place, with its national reputation stronger than ever before.”

Indeed, Roush will leave a legacy of achievement that includes not only approximately 40-percent growth in the size of the student body, but also an increase in its academic profile, overall diversity and international focus. Always fond of describing Centre as a place of “high achievement and high opportunity,” the college’s first-generation student population has also grown significantly over the last several years. To support this growth, the campus has undergone tremendous improvement. Capital projects over his more than two decades of leadership totaled in the hundreds of millions of dollars, funded in large part through several successful capital campaigns. This includes the recently completed Third Century Campaign that raised $210 million and the Campaign for a More Perfect Centre that raised $169 million at its conclusion in 2007.

Three premier scholarship programs have also been created during his tenure. The Grissom Scholars Program for first-generation college students graduated its first cohort of 10 this year, the Lincoln Scholars Program will graduate its first cohort of 10 in 2020, and the Brown Fellows Program is now in its 14th year. As part of its family of scholarships, Centre also began partnerships with the Posse and Bonner foundations.

Roush admits that he has no immediate plans for the future. “I am not closing the door to staying active professionally in some capacity somewhere, but it would be on a more limited basis,” he said. “A wonderful, full-time career of nearly a half-century is enough, and our plan is to invest ourselves in family and friends and opportunities that come our way.”

Pointing to his gratitude for being able to work with such talented faculty and staff, Roush concluded, “Together, we have prepared thousands of students for meaningful lives of learning, leadership and service. There can be no greater sense of satisfaction and accomplishment.”

The search for Roush’s successor will be overseen by the Board of Trustees and begin late summer in partnership with a national search firm. Additional details about the process will follow in due time.

Boyle will benefit from $87M grant to combat opioid overdoses

Boyle County is one of 16 Kentucky counties that will benefit from a massive, $87 million grant from the National... read more