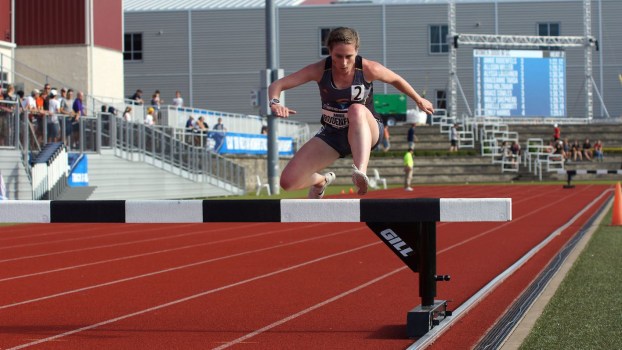 Photo by Ryan Coleman/d3photography.com 2019 Centre graduate Annie Rodenfels capped off her illustrious career by winning a pair of national titles, defending her 2018 crown in the 3000m steeplechase in the morning before winning her first title in the 5k later in the day.

For anyone who has ever been around recent Centre College graduate Annie Rodenfels three things are obvious — she’s a tireless worker, can be a bit stubborn and is confident she can succeed at anything she attempts athletically or academically.

That’s why it is not cockiness when she says she was not surprised she won both the 3,000-meter steeplechase and 5,000-meter run at the NCAA Division III Track and Field Championships Saturday in Geneva, Ohio. It was her second straight steeplechase national title — something only one other Division III runner has ever done.

It was a fitting end to her collegiate career as she became the first female national champion in school history in 2018 when she won the school’s first individual national title in seven years. She also joined Mercer County’s Chrys Jones as the only Colonels ever to win multiple national titles (he won the long jump and triple jump both in 2010 and 2011).

“I am still recovering a little bit and just letting everything set in,” said Rodenfels after getting back home to Centerville, Ohio, on Sunday. “It’s kind of weird to think I will not be running collegiately again but honestly that (winning two championships) is what I was expecting to do. I am very proud because it took a lot of hard work but I knew I could do it.

“I don’t think anybody was expecting me to but I honestly felt they were mine to lose more than mine to gain. With the way I had been training, I felt no one else could keep the pace I was. In the 5K I got a little tired because I had two races (in the steeplechase) already under my legs, but I still stubbornly believed I could do it.”

Rodenfels broke the NCAA Division III steeplechase during the regular season and became the first Division III woman to go under 10 minutes when she finished in 9 minutes, 58.83 seconds. Her 16:45.23 in the 5,000 was fifth nationally going into the national championship meet.

She won the steeplechase Saturday in 10:22.32 in the hot, humid weather and was 18 seconds ahead of the next finisher. She was national runner-up in the 5K NCAA Indoor Championship in March but won Saturday’s national title race by 12 seconds by gradually pulling away late in the race to complete an undefeated season.

Soccer and basketball were her primary sports in high school before she gave track a try on a whim as a junior. She liked running in soccer, one edge she had when she joined the track team. Her sister was attending Centre — not as an athlete — and told Centre cross country and track coach Lisa Owens about Annie. Owens visited and her excitement convinced Rodenfels to attend Centre.

As she was riding home from the national championships with her parents Sunday — “I got very car sick, too” — she reflected on how different her life would be if she had not decided to come to Centre College.

“Right now running is not my biggest passion but it is one of the largest,” Rodenfels, who was third in the 2018 cross county national championship (the best finish ever by a Centre runner), said. “It has changed who I am for the better. It has taught me discipline. “Running is something I want to do the rest of my life. What if I had not decided to run track in high school or what if coach Owens was not so welcoming or if Serena (Gale-Butto) had not been there (as a Centre teammate) to push me. I would never have grown to love running without all that. Now running is one of the most impactful events on my life and has taken me some great places. I don’t want that to stop, either.”

She plans to pursue a professional track career in the steeplechase starting with a race this weekend in Nashville. After that she hopes to do marathons and ultra marathons.

Breaking records was not on her mind when she started track. She did the steeplechase twice for fun in high school.

“I like it but it was not like I said, ‘Wow. That’s my event,’” Rodenfels, who will work at the Maximum Velocity Track & Field Academy at Centre College June 5-8, said.

She got to Centre and heard how former Colonel Hannah Ellis never lost a conference steeplechase event by running around 11:30. Rodenfels knew she could do that and told me during an interview her sophomore year that she wanted to set the Centre steeplechase record — and she easily did.

“Until I finished third (nationally) my sophomore year, I thought I was just okay. I never dreamed of winning the national title or getting the national record. Every time I set a PR (personal record) I never thought I was going to get it. Running sub-10 (minute) was something I wanted, but I was not sure I was that good,” Rodenfels said. “It’s definitely been a pleasant surprise that is has all gone so well but I have a lot more to go.”

By JOE MATHIS Contributing writer SOMERSET — Danville’s bats did what they needed to do to win a region title.... read more