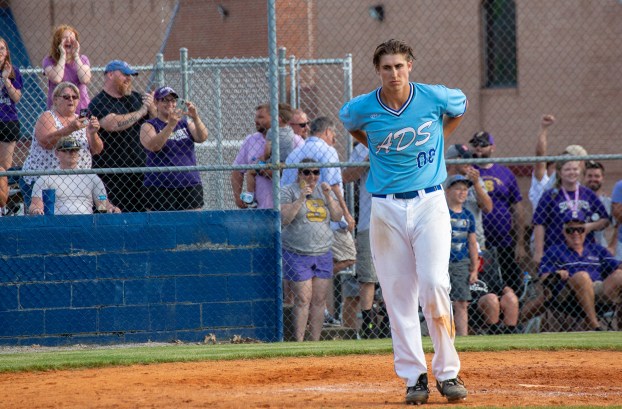 Danville's Ethan Wood walks away from home plate after popping up to end Monday's regional championship against Somerset. (Photo by Ben Kleppinger)

SOMERSET — Danville’s bats did what they needed to do to win a region title. The 12th region’s top scoring team did it again in Monday’s region final, pounding out nine runs on 13 hits. However, Somerset forced Danville’s defense to have to make plays — something they struggled to do. The Admirals defense committed seven errors that led to four unearned runs as Somerset won its first region championship since 2007.

It was easy to see early on that the game would be a special one.

On just the fourth pitch of the baseball game, Somerset lead-off hitter Kade Grundy hit an opposite field home run to make it 1-0 Briar Jumpers. The lead didn’t last long.

Danville answered back quickly. With two outs, Ethan Wood singled. That was followed up by a Preston Barnes single that advanced Wood to third. Barnes would then steal second base and both would score on Christian Howe’s RBI single to left field. Howe would go on to collect two more hits and end the 12th region tournament with mind boggling numbers: 9/11, four runs scored, three doubles and eight RBI.

“He had a great tournament. He was really seeing the ball well,” Danville coach Paul Morse said. “He’s been hitting the ball well in batting practice. We have a lot of confidence in him and he was delivering these last three days.”

Somerset’s Dylan Burton led off the top of the second with a double. He moved to third on a ground out, then scored on a sacrifice fly to center field to make it 2-2.

Danville would go down in order in the bottom of the second. In the top of the third, Somerset grabbed the lead, then added more on in the top. Most of that was due to Danville miscues.

Grundy led off the third by reaching on a Danville error. He was followed by Cam Ryan’s single to center which moved Grundy to third and put runners on the corners with nobody out.

Danville’s second error of the inning allowed Somerset to take the lead. Gavin Stephens hit a ground ball that was booted by the Danville infield which sent Grundy racing home to put Somerset on top 3-2. After a fielder’s choice ground out and a fly ball retired the next two hitters, Somerset added their fourth run on Danville’s third error of the inning on another ground ball that was mis-played. Then Somerset’s fifth run came on another mistake: a passed ball on a dropped third strike that made it 5-2.

All in all, Somerset plated three runs on only one hit. But Danville wasn’t done. Before the bottom of the third began, Morse gathered his team together for a pep talk.

“We’ve preached all year that we’ve come back lots of times,” Morse said. “We tell them games are marathons, not sprints. I just told them that we were down 5-0 yesterday and here we are and it’s 5-2. We’re not even in as bad a spot as we were yesterday so keep your head up and keep having good quality at-bats and good things will happen.”

Jacob Crank led off the bottom of the third and reached on an error. Cayden Shaver then walked to put two on with nobody out which set the stage for Ethan Wood.

One of the state’s top home-run hitters delivered again. Wood ambushed a first pitch Burton fastball that cleared the left center field fence with ease to tie the game up at five. Two pitches later, Barnes saw a 1-0 fastball that he hit to right field that cleared the fence. Four batters into the bottom of the third Danville had turned a 5-2 deficit into a 6-5 lead.

Danville wasn’t done there. Howe reached base, again, then was bunted over by Brady Morse and moved to third on an error. Hunter Baxter then followed that up with a sacrifice fly to left field to plate Howe and make it 7-5.

The Admirals then made a change on the mound going with Howe; the defense, though, still struggled.

Howe got the first man he faced but back-to-back errors put the next two hitters on. Howe then induced a grounder for the second out but Somerset catcher Chance Stayton hammered a double to left field that scored a run and made it 7-6.

Both teams remained scoreless until the bottom of the fifth, when Danville would strike with two outs again.

Young laced a one out single in the home fifth and was followed by a Larmour and Crank walk to load the bases.  After a strikeout, Wood delivered again, rolling a ground ball into center field to score Young and Larmour and give Danville a 9-6 lead.

Unfortunately, though, the Ads would need at least one more run.

Somerset got to work the next half inning, as Stayton tomahawked his second straight double, then scored on a two-out double by Burton to trim Danville’s lead to 9-7. Cole Reynolds roped his own double to plate Burton and make it 9-8. The Ads then made the call to Baxter to end the Briar Jumper threat, something he did on just one pitch on a fly ball to center field.

Danville went scoreless in the bottom of the sixth–then came within one strike of winning it in the top of the seventh.

Somerset’s next hitter, Stephens, would take a close 2-2 pitch to run the count full, then take a ball one pitch later to walk and put two on with two out — and Stayton would make the Admirals pay.

The Somerset backstop lined one to right field that hit the top of the fence, sending Grundy and Stephens sprinting for home and leaving Stayton sliding in at third base with a two-run triple that gave Somerset a 10-9 lead with two outs in the bottom of the seventh.

Danville had one more chance to answer but their half of the seventh ended in unceremonious fashion with two strikeouts and a popout, sending the Briar Jumpers to dogpile in front of the pitchers mound celebrating a 12th region title.

“Both teams you could tell were really nervous,” Morse said. “It was a pretty poorly played game by both teams defensively.” Danville ended up committing seven errors, Somerset committed two.

“You could tell there were a lot of young guys on the field that were nervous for both teams. I guess that bodes well for the future for both programs, but when you score nine runs, you should definitely win the game. But it’s hard to do that when you commit seven errors.”

Despite the region final loss, it was still a record setting year for the Admirals. Danville won a school record 34 games and will return seven of the nine starters to next year’s team.

“We had a great year,” Morse said. “And being as young as we were it’s even more remarkable. We just told them you’ve got to learn from today and use this as a learning experience for guys coming back. We told them you can be disappointed in the way they played today but it’s time to go to work. It’s time to get bigger and stronger and work on their game over the summer. Just get better and be prepared for next year because there’s a lot of good baseball played here in the twelfth region.”

By MIKE MARSEE Contributing writer Pairings were drawn Thursday for the 12th Region baseball and softball tournaments, which begin this... read more