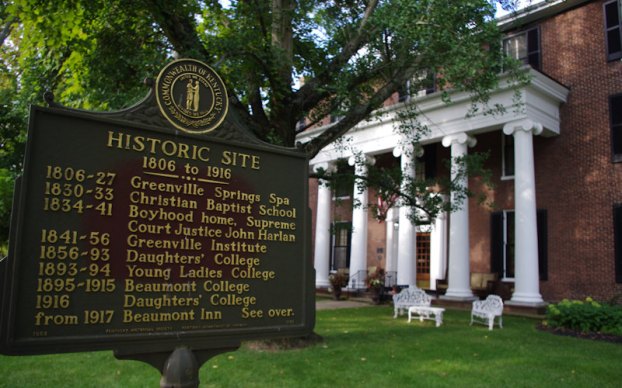 HARRODSBURG — Five generations of the Goddard and Dedman families have operated historic Beaumont Inn and restaurant for a century.

The building originally served as a school for young women. First known as Greenville Institute, and later as Daughters College, it would become Beaumont College before it closed in the early 1900s.

The three-story brick structure, built in 1844, was described in the Daughters College catalogue as, “An elegant brick mansion, 80 by 52 feet, three stories high, well-ventilated, built with hollow walls to prevent dampness in the rooms, secured by a metallic roof and other means against liability to fire, and a most ample dining room, kitchen and bathroom, completed at a cost of $10,000, and prepared for the accommodation of 100 pupils.”

Six white columns made of solid, round-edged bricks and covered with cement support the two-story front porch. The walls are 18 inches of solid brick with ventilating spaces. Many of the windows contain their original hand-rolled glass panes.

Windowpanes in the bedrooms show proof of engagements, their dates and the names of friends cut out by the students’ diamond rings.

Glave and Annie Bell Goddard purchased the old Beaumont College building and a half acre of land in 1917. They paid $7,800. 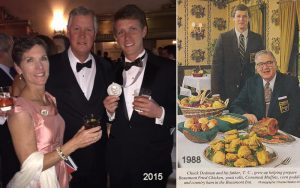 Samuel Dixon Dedman, right is shown with his parents Charles “Chuck” and Helen Dedman, when the Inn received the 2015 American Classic Award from the James Beard Foundation. (Photo contributed by Beaumont Inn)

Annie Bell had graduated from the college in 1880, taught mathematics and later became dean of the Beaumont College.

The Inn was in high demand among former students of the college.

The Inn is Kentucky’s oldest family-operated country inn. The business has received many awards, including the 2015 American Classic Award from the James Beard Foundation, given to restaurants that “have timeless appeal and are known for quality food that reflects the character of their community.”

A large collection of historic photographs and interesting artifacts are displayed inside the front entrance.

A room near the entrance was the school library. Original cherry bookcases filled with old books used by students and teachers line the walls. Prior to the Civil War, other bookcases, made of walnut, apple and poplar, were added to the original ones.

Double parlors off the entrance hall display a fireplace and wallpaper decorated with red poppies. The curtains for the parlor windows, made of embroidered cutwork linen, came from Madeira Island off the coast of Portugal.

Crystal chandeliers, pier mirrors, and mantel mirrors came from the original Galt House in Louisville before it was torn down.

An old Steinway parlor grand piano made of mahogany was given to Bessie Dedman, a great aunt, by her father Charles M. Dedman in 1893, when she was 14 years old.

A collection of Empire and Victorian tables, chairs, and lamps is a place for conversations or a sing-a-long.

Photographs of Jefferson Davis, a Kentucky native and president of the Confederate States of America, and his second wife, Varina Howell, and paintings of George and Martha Washington are featured in the hall.

A petit-point portrait of Christ in the Garden of Gethsemane stitched by nuns more than 170 years ago is in the back parlor. It was a gift of Anne Bell Goddard in 1930. The back parlor also has a gold and glass cabinet filled with 100 antique master salts, collected by Alice Gusset Ransdell, sister-in-law of Mary Elizabeth Dedman.

Twin stairways lead to the second- and third-floor bedrooms. Anne Bell Goddard’s antique walnut handmade teacher’s desk is under the south stairway and a cherry chest with a display cabinet contains a sawdust china-headed doll and chair that belonged to Bessie Dedman.

A gold-plated Cleopatra clock and a table sent from France for the French exposition at the 1893 World’s Fair in Chicago is in the central hall of the Inn. A gold-leaf mirror flanked by paintings of Stonewall Jackson and his wife, Sara, once hung in the parlors of Wildwood, home of W.W. Goddard. 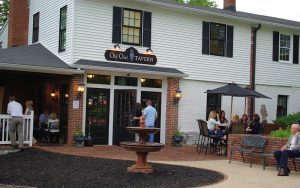 The Old Owl Tavern is the latest addition to Beaumont Inn.
(Photo contributed by Beaumont Inn)

A large wooden chair used by Franklin D. Roosevelt in 1934, when he was in Harrodsburg to dedicate the George Rogers Clark Monument at Old Fort Harrod, also is in the hall.

Portraits of Thomas Bell and his wife Sarah Conner Bell, great-grandparents of the present innkeeper, hang above an antique sofa.

Other antiques displayed in the hall include a cherry chest of drawers and an antique doll given to Pauline Bell Goddard Dedman by a friend.

The James Harrod Room at the end of the hall is for playing cards, meetings and small gatherings.

A mahogany roll-top secretary in the second-floor hall belonged to W.T. Curry, who purchased it in 1850. He was a master carpenter and contractor who built many of the local houses.

Guest rooms are furnished with antiques inherited from four sides of the family or collected by the owners. Several rooms have four-poster beds, chests of drawers or marble-top dressers, armchairs, bedside and writing tables, and spool, Victorian or cannonball beds.

The Old Owl Tavern and Owl’s Nest Lounge were established after the local option ordinance was passed in 2003, allowing the inn to acquire a liquor license.

The Tavern is located on the south end of the main building, where carriages and wagons were originally stored.

Photographs of old distilleries in Mercer County before Prohibition decorate the walls.

The tavern got its name from Old Owl Kentucky Whiskey, which was distilled at the Dedman Distillery on Oregon Road in Mercer County.

The Beaumont property also includes guest rooms in Greystone House and Goddard Hall, and a spa in Bell Cottage.