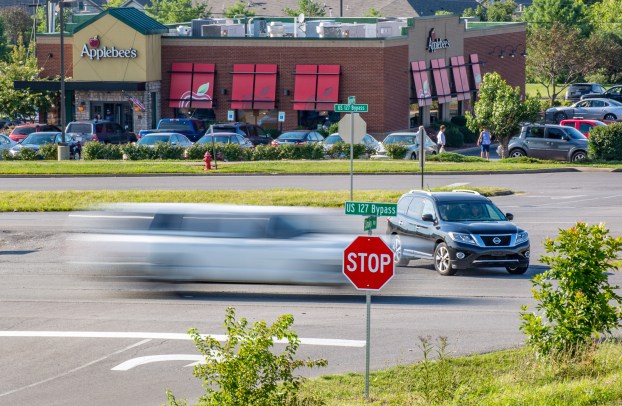 An SUV waits in the median to complete a left turn onto the Danville Bypass from Belinda Boulevard last July. A traffic light at the bypass intersection in front of Applebee's is desired by many people in Danville, but won't happen until the state decides it's necessary. (File photo by Ben Kleppinger)

Many Danville road projects are a local priority, but require state approval

Those features have to be approved by the Kentucky Transportation Cabinet when the city wants to add them to state roads like Main Street and Maple Avenue, Danville City Engineer Earl Coffey told members of the Boyle County Community Task Force meeting on Tuesday.

“Most of the time … it’s just waiting on somebody to say yes.”

“Everything you do, you’re asking politely,” Coffey said. “You have to exercise an extreme amount of patience” when going through the procedure of having a project approved at the state and federal levels. “When we say time consuming, it’s not two months; it’s two years.”

Crosswalk safety is an issue that Coffey has studied. Improving signage and handicap ramps at crosswalks in front of Danville High School and John W. Bate Middle School have been requested for nearly two and a half years. Bate’s crosswalk isn’t even connected to a sidewalk, Coffey said. “I don’t know why that’s been hard to get approved.”

Many people who travel on U.S. 127 near Kroger, Hobby Lobby, Liquor Barn and Starbucks want a traffic signal at the intersection with the access road next to Applebee’s restaurant, Coffey said.

In order to get the state transportation department to approve a signal there, it has to meet two or three of the five stipulations that warrant a traffic signal, Coffey said. But state highway officials say it isn’t warranted.

Even if a connecting road is built between Belinda Boulevard and Fox Harbor Drive, which would create a new path to the bypass for the large residential area west of Hustonville Road including the neighborhoods of Fox Run Trail, Denmark Drive, Longview Road, Carrigan Drive and Cloverdale Drive, adding more vehicles at that intersection, a signal light won’t be immediately installed.

“That intersection will get a light when the state says it’s warranted,” Coffey said.

But the intersection would have to have extensive construction to “flatten out” the elevated curve in the bypass to meet federal requirements for a traffic light. “The state would have to spend substantially more.”

“So, signalizing that intersection is not easy. It seems like it should be but there’s many elements to it,” Coffey said.

Another example of the city maybe appearing to work slowly on a project was last year when it lowered the speed limit on Maple Avenue near the bypass from 45 to 35 mph at the same time as the state changed its policy, which allowed cities to change speeds on state roads.

The new state policy now requires a five-step process for cities to get approval to adjust speed anywhere, Coffey said.

Danville had already placed the new lower speed limit signs, Coffey said, and the state highway department pulled them all up and replaced them with the original 45 mph signs. “The state acknowledged that Maple Avenue needed to be cleaned up. … We’re going to put them back up whenever permission is given to do that.”

The Boyle County High School Class of 2019 was celebrated during the school’s commencement Saturday night at the school. Photographer... read more