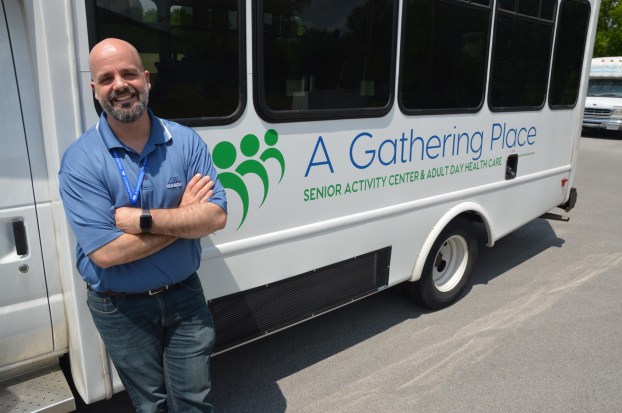 Ben Guerrant redesigned the senior citizens center’s name and logo as part of a rebranding process. (Photo by Bobbie Curd)

Ben Guerrant came on with the senior citizens center as executive director in 2016, and one of his first missions was increasing the awareness of the brand.

“Which seems more fun: Danville-Boyle County Senior Citizens Center, or a Gathering Place Senior Activity Center & Adult Day Health Care?” Guerrant asks from behind his desk Tuesday. Music is heard coming from the activity room, and seniors work together on a line dance in front of the mirror. Loud laughter is heard down a hallway, from the adult day health care side.

The fun being had here is hard to argue with.

The name change has made the center seem more approachable, Guerrant says, and lends itself to a kinder, more gentler facility.

It also helped to bring the adult day health care side under the same umbrella.

The center offers scheduled senior citizen activities Monday, Wednesday and Friday, and adult day health care services from 8 a.m.-4 p.m. five days a week, which is geared towards those aged 21 and up with special needs.

“We have clients with varying mental abilities,” he says. They may have a client with Down syndrome, autism, schizophrenia, traumatic brain injury, an undiagnosed disorder …

Guerrant comes out from behind his desk to take a walk down the hall to adult day health care, and Beau, the center’s therapy dog, promptly comes out behind him. Clients Jimmy and Cecil sit around a table with staffers Mary Fish and Christie Godbey, just outside Director Anita Pike’s office. 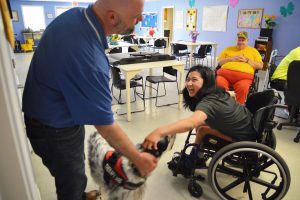 Ben Guerrant and therapy dog Beau visit with client Hallie at A Gathering Place, on the adult day health care side. Guerrant is executive director of the senior citizens center and adult day health care, and says no one will “walk away from here rich or wealthy. Other than the wealth of love we get from the people we’re serving.” (Photo by Bobbie Curd)

The room is upbeat and active, feeling more like one big family with clients and staffers teasing each other, laughing together. A client on the other side of the room, Hallie, starts yelling for Guerrant. “Ben! Ben! Where’s your dog?”

As Hallie begins to pet Beau, Guerrant pretends to cry, telling her not to touch his dog; Hallie laughs so incredibly hard, her eyes begin tearing up. “We started this the other day,” Guerrant says.

As Guerrant enters his fourth year as director, he says the center has changed dramatically. When he first came on, the center wasn’t administering Title III funds, which is part of the No Child Left Behind Act.

It pays for the home-delivered meals the center now offers. A Gathering Place has driven 10,0888 meals to seniors over the last 10 month period.

Guerrant was in real estate for 14 years and took a break from it. “This opportunity kind of presented itself, and I thought why not. I love people, and I have a soft spot in my heart for those with special needs,” he says. He has a very close, very special family member with special needs.

Other big changes include Medicaid, which is always changing, Guerrant says. “That affects operations in our adult day health care, so there’s been a lot of operational transition since I’ve come on.”

Although he has many administrative responsibilities, Guerrant isn’t always behind a desk. “Not at all,” he says. Just this morning, he had to make a quick supplies trip to Sam’s Club in Lexington. He just replaced a doorknob on one of the center’s doors. He gets behind the wheel of one of the vans and drives seniors to appointments. He gets pies thrown in his face.

“Who doesn’t want to throw a pie at the director? Just for fun.” Guerrant can often be seen during cookouts, his entire head popped through a cutout with cream pie smashed all over his face. Just something he came up with, to make clients laugh. 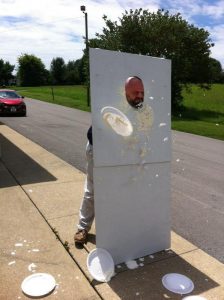 (Contributed photo)
Ben Guerrant, executive director of A Gathering Place, gives clients a laugh by letting them throw cream pies at his face during a prior cookout event at the center.

“And it does. They love it. They pied the holy crap out of me,” Guerrant says, shaking his head and laughing. He sometimes will cook for clients and seniors.

Something most would be surprised about with his job, unfortunately, is just how much advocacy it requires. “At least more than I think people realize. I have dealt with several elder abuse situations, with law enforcement involved and adult protective services …”

It’s important to advocate on behalf of seniors, especially when they don’t have anyone else in their corner. “I see that more often than I would like to say,” Guerrant says. Cases can involve families not living in the same community, people not having children, and some of it is drug-related.

“A lot of the time, the situation is just that they don’t have anybody. For whatever reason, they’re alone.” He says there are some parts of the job he doesn’t like dealing with, like losing them.

“There are times when seniors come to me because they trust that I’m going to look out for their best interest because nobody else in their immediate circle is …” Guerrant has helped the elderly who have been kicked out of their homes, sometimes by family members, find assisted living. It can break your heart, he says.

“But when you have a senior tell you ‘I don’t know what I’d do without the center because I was so lonely and just depressed, I was considering suicide but I was afraid to do it. But now I don’t feel like it’s even an option, because I’ve got a purpose,’ what do you say to someone?”

They have some clients who have been with the adult day care side for 20 years, he said. You get to know them, and they become a part of your extended family, Guerrant says.

“Nobody that works here will walk away from here rich or wealthy. Other than the wealth of love we get from the people we’re serving. That’s what keeps all of us coming back.” 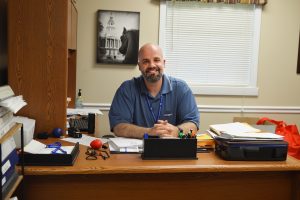 (Photo by Bobbie Curd)
Ben Guerrant, executive director of A Gathering Place Senior Citizen Acitivity Center & Adult Day Health Care, says sure, he’ll pose for a picture behind his desk, but that’s not always where you’ll find him on the job.

He feels rewarded getting to spend time with the seniors and special needs adults. Guerrant treats them the same he does anyone else, he says.

At the end of the day, sure — our bodies get older, he says. “But I don’t think your soul does.”

HARRODSBURG — Five generations of the Goddard and Dedman families have operated historic Beaumont Inn and restaurant for a century.... read more