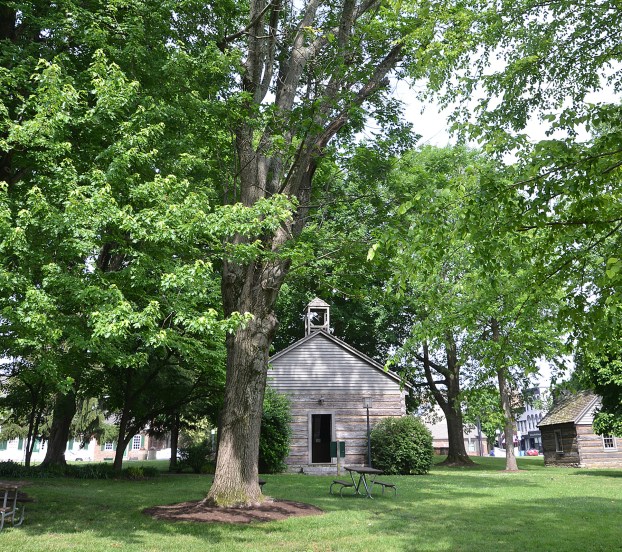 The red maple tree standing near the Meeting House at Constitution Square is in fair condition, according to arborist David Leonard. (Photo by Robin Hart)

Constitution Square trees get a wellness check thanks to arborist, garden club

The trees at Constitution Square park got a professional checkup on Friday, thanks to the Garden Club of Danville.

After reading a “Looking Back” article in The Advocate-Messenger in March about Robert Darbishire, who donated and planted 100 native Kentucky trees in the park in 1944, club members Pam Leinauer and Susan Jonas were inspired to map the trees growing in the park today and check on their condition, Jonas said. 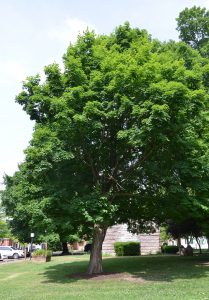 The sugar maple tagged as No. 172 at Constituion Square is rated in C- condition and needs overall pruning to shape it up, according to arborist David Leonard. (Photo by Robin Hart)

A few of the trees may even be the original ones planted by Darbishire 75 years ago, she said.

Leinhauer and Jonas wrote a grant application several weeks ago for Boyle Fiscal Court, requesting a grant from the garden club to use for hiring of a professional arborist to help with the project.

The grant was approved and this past Friday, arborist David Leonard, of Lexington, spent the afternoon with Leinauer and Jonas inspecting and mapping the trees, Jonas said. They also discussed the best way to prune branches, Jonas added.

Leonard is “very well-known around the Bluegrass,” Jonas said.

Leonard had been hired to spend two hours on the project, but when the time was up, they had only mapped about half of the trees, Jonas said. Leonard said he was having so much fun, he completed the project without charging more, she said.

As Leonard measured, inspected and tagged each tree, Leinauer and Jonas took notes.

Each of the 42 trees in the park now has an aluminum tag nailed in at about 7 feet off the ground, and they are numbered from 134 to 176, Jonas said. Tree girths were measured at 4 feet from the ground. The locations of the trees were recorded by their numbers on a map. The condition of each tree and suggestions on what needs to be done to help keep it healthy is being formed into a report that Leonard will submit to the garden club, Jonas said.

For example, tree No. 134 is a Sugar Maple and is 32 inches in diameter. According to the notes, it should be mulched further from the trunk to protect the roots, but overall it is “an awesome tree in excellent health.”

Several other trees need pruning of dead and wounded limbs, Leonard said, among other things.

Leinhauer said, “Since the mission of the Garden Club of Danville is to aid in civic beautification, promote conservation and protection of natural resources, it is extremely satisfying to be able to provide all three to Boyle County via the trees in Constitution Square.

Convention and Visitors Bureau Executive Director Jennifer Kirchner said, “The trees at Constitution Square Historic Site are a defining feature. But proper care can be costly. For many years each spring, we have had a park clean up day and mulched the trees. But we realized it’s time we go more in-depth to ensure we don’t lose anymore. Some have suffered from storm damage.”

The survey that will be provided to fiscal court will include detailed information about each tree, Kirchner said. “This will serve as a guide over the years to keep the trees maintained and healthy.”

“The park means a lot to people from here and far away,” Kirchner said. “It’s a beautiful public space that’s uniquely Danville so it’s worth preserving.”

The massive Sycamore tree standing near the restrooms is 36.8 inches in diameter and is A+ condition. (Photo by Robin Hart)

Tag No. 164 is on a red oak that’s 35 inches in diameter. Arborist Daniel Leonard said the tree is in fair conditon, and may have been hit by lightening in the past. (Photo by Robin Hart)

Tree tagged as no. 169 is a large, health sycamore tree standing near the restrooms at Constitution Square. (Photo by Robin Hart)

Tree No. 172 is a sugar maple and is 23.1 inches in diameter and is located near the visitor parking at Constitution Square on East Walnut Street. (Photo by Robin Hart)
You Might Like

More than half of Boyle county’s kindergarteners are not ready to learn, which eventually affects the community’s economy and workforce... read more