Boyle’s current sign ordinance ‘has to go.’ Here’s what could replace it. 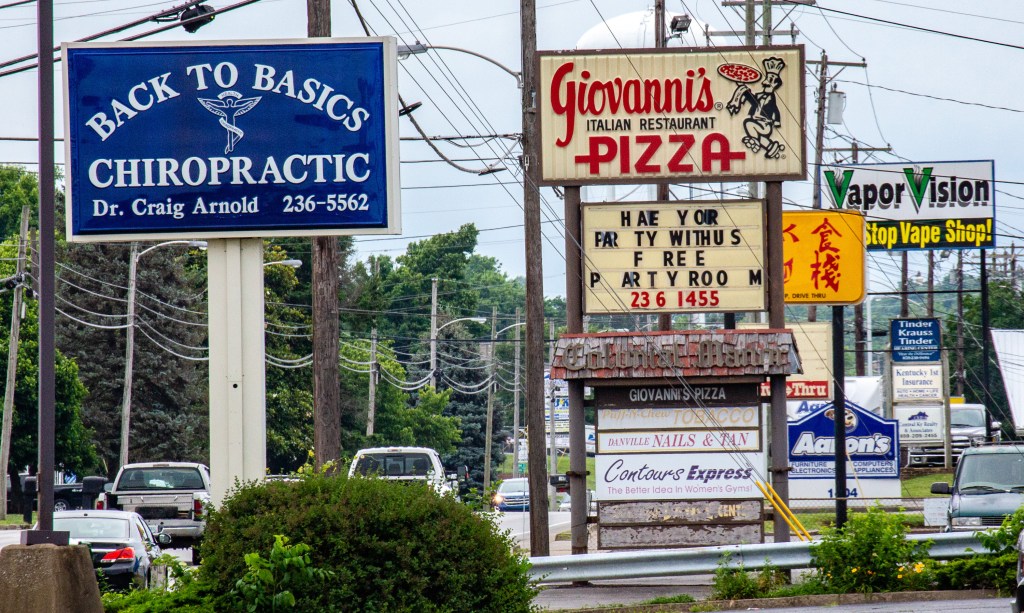 Ben Kleppinger/ben.kleppinger@amnews.com Traffic passes by numerous pole signs lining the northbound side of Hustonville Road Thursday morning. Proposed amendments to the local zoning ordinance would alter some of the rules for new commercial signs.

The Danville-Boyle County Planning and Zoning Commission and most local governments pushed through modest reforms to the local zoning ordinance earlier this year without much fanfare. The modifications to articles 1, 2, 3 and 6 mostly cleaned up the text and provided some fresh definitions.

That first step was only a warm-up round for the next, far more ambitious zoning update, which P&Z Director Steve Hunter helped informally kick off Wednesday, when he shared drafts of part of Article 4 with members of the Boyle County business community.

“The next half of the ordinance gets kind of rough … 4 is going to be all of the standards. We’re changing all the zoning names to something different, we’re changing setbacks, we’re changing landscaping, we’re changing parking,” Hunter told the crowd of about 30 business owners and government leaders, who had been invited by the Chamber of Commerce. “A lot of stuff is staying the same but we’re modernizing every single thing we can modernize.” 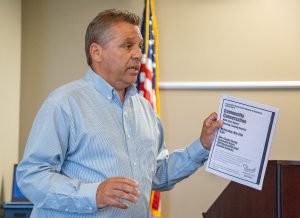 Hunter said he’s done these kinds of updates before and knows where the biggest sticking points often are. One of the biggest is what the ordinance says about signs.

“Typically, any time you change the sign ordinance, the local business owners come at you pretty hard,” he said, explaining that modifications to sign ordinances often involve clamping down on restrictions. “… Any time you’re regulating signs stricter, you’re going to get blowback from businesses.”

But stricter regulation is not really the name of the sign game in this case, Hunter said. That’s due in large part to a 2016 Supreme Court ruling that essentially negates the existing P&Z sign rules for being unconstitutional restrictions on freedom of speech.

That case, Reed v. Town of Gilbert, Arizona, “changed everything we know about signs in one big swoop,” Hunter said.

In a nutshell, the ruling made it illegal for regulations to be based on the content of a sign. “If you have to read it” to know if it violates the ordinance, then the ordinance is unconstitutional under the 2016 ruling, Hunter explained.

In order to accomplish that, the part of Section 4 addressing signs has been whittled from somewhere in the vicinity of 27 to 30 pages in its current form down to seven pages in the proposed revision.

Temporary signs such as campaign signs and real estate signs would essentially be allowed everywhere but in right-of-ways, and the only restriction would be on size — no larger than 4 square feet.

Every existing permanent sign would be grandfathered in if the new rules are put into effect — something that’s still a long way from happening. But new signs would have clearer, more concise and more sensible rules to follow, Hunter said.

For example, commercial wall signs would simply be limited to taking up 10 percent of the available wall space on a building in most districts. There would be no fussing over counting different walls or limiting the number of signs, and also much less worrying about who gets a bigger or smaller sign in a multi-business facility such as a strip mall, he said.

New freestanding signs in the highway business district would get an upgrade from a maximum of 100 square feet to 128 square feet, which would serve as a “carrot” to encourage businesses with older, less attractive signs to invest in new ones because they can be bigger, Hunter said. At the same time, the proposed rules would lower the maximum height of such signs from 30 feet to 24 feet. However, there’s another change aimed at making things fairer mixed in — that height restriction would be measured from the level of the road outside the business, not the base of the sign. That means a business on a property that sits below the road elevation could have a sign just as high as a neighboring business that sits above the road elevation, Hunter explained. 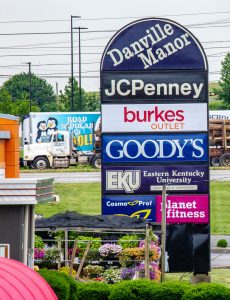 Ben Kleppinger/ben.kleppinger@amnews.com
The rules for consolidated shopping center signs, like this one for Danville Manor on Hustonville Road, would be changed under proposed zoning amendments being considered by the P&Z Commission. Existing signs would be grandfathered in, but new signs could be 200 square feet — twice the current limit.

“Consolidated shopping centers” — commercial spaces with 100,000 square feet of space and at least six tenants — would be granted 200 square feet for entrance monument signs, effectively doubling the space allowed. That’s so the panels for each individual business could be large enough to be read easily from a car — in fact, the new rules would require minimum text and panel size on such shopping-center signs in order to guarantee readability.

Hunter said he thinks the proposed revisions contain good news for downtown business owners, who have complained to him that the P&Z sign rules and the sign rules in place for the city’s downtown historic district are different.

“We’re getting out of the sign business, 100-percent, downtown,” he said.

The proposed revision would leave regulation of signs in the historic district almost entirely up to the Architectural Heritage Board, which oversees the district. The only restriction left in place at the P&Z level would be a ban on electronic message display or EMD signs — illuminated signs that are essentially bright television screens.

EMD signs would be allowed outside of the historic district.

Hunter fielded some questions from those who attended the “community conversation” event, but none of the questions were particularly critical of any of the proposed changes.

Downtown property owner Nancy Davis did have a different question for Hunter: She wanted to know how the new zoning ordinance would address “airbnbs” — short-term rental properties that have popped up around Boyle County as they have across the nation in recent years.

“We’re still working on that. I have the weekend to figure that one out,” Hunter joked.

The questionable legality of short-term rentals when operated in a single-family residential zone has been on some people’s minds since it was brought up at a community forum with Boyle County Magistrate Jason Cullen in April.

Hunter explained at the April meeting that current zoning does not allow for short-term rentals in residential districts — or really anywhere, for that matter, except in the zoning ordinance’s least restrictive commercial zone. But more than 40 short-term rentals, mostly in single-family residential zones, continue to operate in Boyle County.

Hunter said Wednesday he’s aware there are some people who want an updated zoning ordinance to let short-term rentals operate essentially anywhere in the county, including in residential neighborhoods. But he’s of the opinion they don’t belong there.

“We get complaints every week,” he said. “I think if you bought into a single-family neighborhood with an expectation that it’s single-family, and I live here with my kid and my dog and my brother, whatever. I don’t think it’s right that next door becomes a hotel.”

Hunter said he thinks multi-family zones, where apartments or duplexes might be built, are more appropriate. Most places around the state are choosing to allow short-term rentals only in commercial zones; Louisville and Danville might be the only exceptions, he said.

“Right now, we’ve got one person renting 42 rooms, five different houses,” he said. “This is not positive things in neighborhoods right now. I think some of the spin has been these are good, they’re needed, people love them. And we all love them. I stay in them. But I just think in certain areas, they’re not appropriate. And we’re just going to have to draw the line on those unfortunately.”

Hunter noted toward the end of the event that the proposed updates will encompass far more than just signs and short-term rentals. Setbacks, parking and “so many other things” are in the rewrite, that “at the end of the day, signs are just 3 percent of what we’re talking about.”

P&Z Attorney Henry Smith said the best way for people to get questions or comments about the proposed zoning amendments on the record is to attend the public hearing on the amendments, scheduled for the next P&Z Commission meeting. That meeting is scheduled for 9 a.m. on Wednesday, June 26, at Danville City Hall.

P&Z Director Steve Hunter said he anticipates the commission will table the proposed amendments at the meeting, allowing for further community discussion and public input before they are brought back up for the commission to consider recommending.

The zoning ordinance currently affects all of Boyle County except Junction City, which is still working on the lengthy process of fully rejoining P&Z. All the local governments that are currently a part of the zoning ordinance — Danville City Commission, Boyle County Fiscal Court and Perryville City Council — would have to approve following a recommendation from P&Z in order for the amendments to take effect.

Draft of Article 4 in its entirety