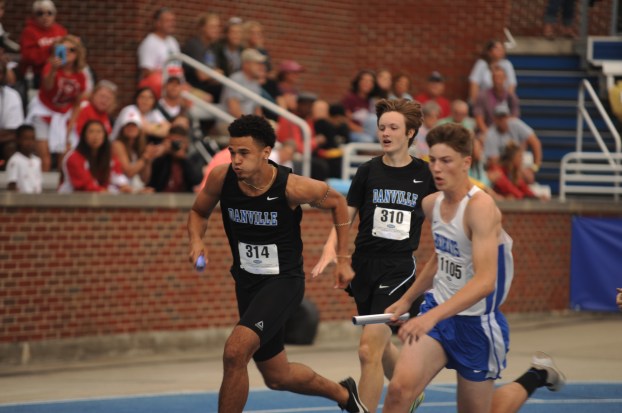 Senior Zach Thornton receives a hand-off from Briar Sanders in one of the relays that Danville finished in the top three. (Photo by Derek Brightwell) 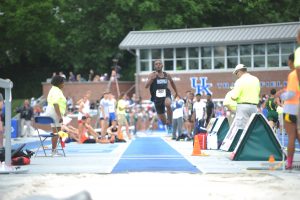 Damon Jackson overcame a leg injury to score points in both triple and long jump. (Photo by Derek Brightwell)

Senior Damon Jackson earned points in both the triple jump, finishing seventh for two points, and the long jump, fifth for four. This was despite going down with what appeared to be a leg injury earlier in the day. Jackson also contributed as the second leg in a third place finish in the 4×100-meter relay.

Junior Gabe McKnight also earned six points for the Admirals with a third place finish in the 300-meter hurdles, bouncing back from an uncharacteristically low finish in the 100-meter.

Senior Zach Thornton, competing in his last track and field meet of his high school career, was a member on all of the top three finishing relay teams, culminating in a close third place finish in the 4×400-meter relay, was optimistic about how he’s leaving the program.

“I’m glad we got it back to at least where it used to be at,” Thornton said of the Danville program. “Back in the day it was a great program. Not just track, it was football, basketball, every sport. I think we’re getting back to that, to where it used to be.”

Ever the competitor, though, he knows they could have done better.

“I think we did pretty good. I think the rain sort of messed us up today. I think we came up a little short in the state championship,” the senior said, adding that the rain affected every team. “Nobody wants to be wet. It is was it is, you have to overcome it.” 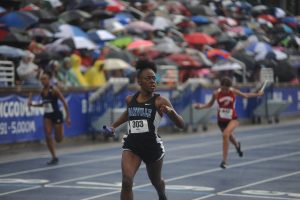 Anaiah Jenkins checks her time as she crosses the finish line after relay. (Photo by Derek Brightwell)