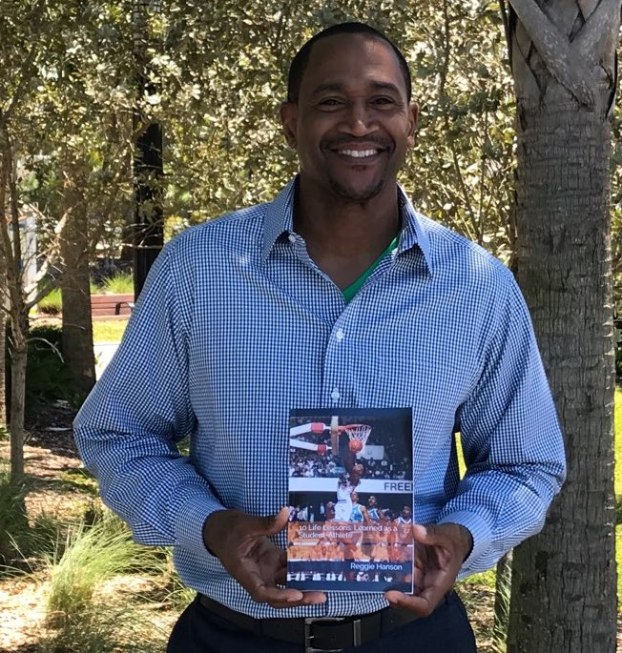 Former Kentucky player and assistant coach Reggie Hanson has written a book based on life lessons he learned through athletics, he thinks will help both college and high school athletes. (Photo contributed)

Former Kentucky basketball player and assistant coach Reggie Hanson has kept up with college athletics since getting out of coaching in 2014 and has remained “invested” in college basketball.

He’s also seen the high number of Division I athletes transferring each year and how the number continues to grow.

That was part of the inspiration for writing his book, “10 Life Lessons: Learned as a Student-Athlete.”

“Players get out of college in four or five years and they are still not ready for real life,” said Hanson, who scored 1,167 points during his UK career from 1987-91 before later spending seven seasons on coach Tubby Smith’s UK staff. “All the things they learn in athletics do not always transition to real life for different reasons. The more I saw that, the more I felt I needed to write this book to help young people understand that college can translate to real life.”

He knew he had to be able to write what would relate to college and/or high school students to “grab their attention” so he could help them.

“I took my experiences at UK as a player for Rick Pitino the last three years and how each experience translated to real life,” Hanson said.

That’s why the book has 10 lessons/chapters and each is a real life experience that Hanson had where he could show how that translated to real life. The chapters include perseverance, overcoming adversity, leadership, mental toughness, organization and time management, preparation, trusting the process, personal authority, sacrifice, communication, discipline and more.

“I give some funny stories to things that happened to me to make the book more interesting,” Hanson, who briefly played in the NBA and then seven years in Japan as a player and coach, said.

His book is also for coaches because he feels they need to have more “teaching sessions” with players about real life.

“Why not talk about how scouting reports transition to the business world when you are doing a presentation. If you do not do the right scout, you lose the game. If you don’t get the presentation right, you might lose your job,” Hanson said. “I am not putting blame on coaches. Most are on a short leash and have to develop players, succeed and win games. I just want to bring back a reminder about how are they doing with helping players get ready for real life.”

Hanson got out of coaching in 2014 and tried several jobs in the business world before finding one he enjoys — he’s a manager at Dillard’s, a successful retail chain in Tampa.

“So many different people reached out to me after I got out of coaching because they understood in the corporate world you have to develop skills with your employees just a like a coach does with his players,” Hanson said.

Hanson says his book is geared to help show what college athletes will go through and it can help high school students as much, or maybe more.

“For high school kids, it might be an even better read because it will help them know what to be prepared for in college. Most have no clue what they will be going through. I know I didn’t. This book will help give them a leg up but it really will help anybody who just wants some life lessons they can use,” Hanson said.

“The people who have bought it so far have given me nothing but great feedback. It’s an easy read but you’ll get a lot out of it.”

Actor Josh Hopkins first met Hanson when he was a Lexington high school student and Hanson was playing at UK. The two have remained friends and Hanson said the actor was one of the first people to buy the book.

“When I saw he was releasing a book I knew I had to read it and I’m so glad I did,” Hopkins, one of the star’s of the current ABC-TV show “Whiskey Cavalier,” said. “It should be must reading for student-athletes in high school or college and the lessons are easily relatable to situations in the professional world whether it be sport or otherwise. It’s a short read with excellent advice and Reggie has a welcoming voice that manages to teach without seeming preachy.

“He also throws in these side stories where he gives examples from his life and career and there is some fantastic behind the scenes info that any Cat fan would love to learn about that era of UK basketball.”

Hanson hopes to set up a book signing tour in Kentucky soon. Until then, Hanson suggests going to Amazon.com, type in his name and information on the book will appear.

By MIKE MARSEE Contributing Writer NICHOLASVILLE – There were big plays in the early innings, big hits in the middle... read more