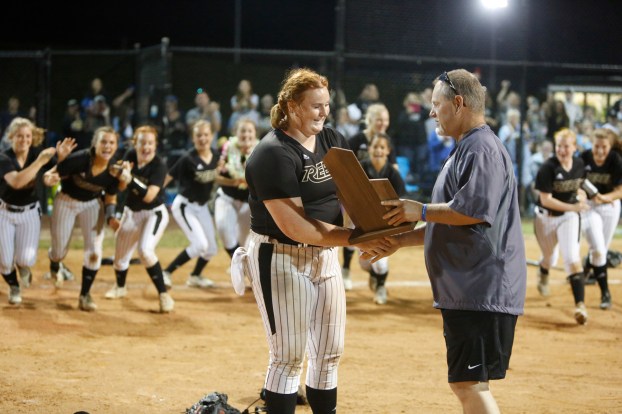 Katy Grace Chadwell accepts the championship trophy as her Boyle County teammates rush to join her following the Rebels’ 5-4 victory over Garrard County on Wednesday in the 12th Region Tournament championship. (Photo by Mike Marsee)

NICHOLASVILLE – There were big plays in the early innings, big hits in the middle innings and anguish on the way to the final out. But in the end, there was Boyle County, on top of the 12th Region once again.

The Rebels led 5-0 after 4 1/2 innings, but the outcome was in doubt until the final out as Garrard charged back. The Lady Lions scored twice in the bottom of the seventh and had the tying run on third base and the winning run on second before a fly ball ended the game and launched Boyle’s celebration. 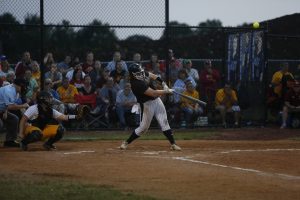 Katy Grace Chadwell, the Boyle pitcher who was named the tournament’s most valuable player, was not surprised.

Boyle (30-6) will play in the state tournament for the third straight year and for the fifth time in the last eight years, but things will be different this year. The format has changed to single-elimination, so the Rebels must play a semi-state game Saturday before advancing to the state tournament site.

Boyle will face Woodford County in that semi-state game at 11 a.m. Saturday at Berea College. Woodford (30-5) defeated Madison Southern 12-3 in the 11th Region final Wednesday. The Boyle-Woodford winner will be among the eight teams that advance to the final three rounds June 7-9 at the University of Kentucky’s John Cropp Stadium.

The regional final matched two teams from the 45th District that have been among the top teams in the region for more than a decade. They have seven regional titles and 11 appearances in the finals between them since 2007, but they had never met in the regional title game before Wednesday night.

The two teams have met in the past seven 45th District finals, most recently last week, when the Lady Lions ended the Rebels’ run of seven straight district titles with a 12-4 victory in Lancaster.

Boyle had won the regular-season meeting between the two teams, but Deem said after the Rebels’ semifinal win that they had soething to prove to themselves after their loss in the district final. 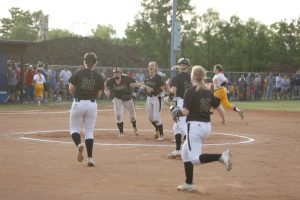 “He always tells us to compete with ourselves before we compete with anybody else, so that’s definitely what we had to do,” Chadwell said.

Clutch hits from the second, third and fourth hitters in the Boyle lineup produced Boyle’s runs, and they needed every one of them.

Chadwell homered in the fourth inning to break the scoreless tie, and run-scoring singles by Hailey Cannon and Chadwell and a home run by Bowling in a four-run fifth gave the Rebels a 5-0 lead with nine outs remaining.

“That one inning that we scored four started with a slap hit by Ashley Roller, one of our bunnies, and then we got a bunch of two-out hits,” Deem said.

It was a scoreless pitchers’ duel for the first three innings, when Boyle’s Chadwell and Garrard’s Kelsey Perkins allowed only three hits between them.

Boyle broke through in the top of the fourth inning when Chadwell launched a towering home run down the left-field line – her sixth home run of the season – to put the Rebels on the board in the fourth.

Then they scored four runs with two outs in the fifth, which was capped by Bowling’s two-run homer to right-center field that made it 5-0.

Roller got the inning started with a one-out single, then stole second base and came home on a two-out single by Cannon. Chadwell followed with another single to drive in Cannon, who had taken second on a throw home, and Bowling followed with her eighth homer of the season.

Garrard (29-4) got off the mat in the bottom of that inning, when Addison Pevley launched a home run to left field. An inning later, Katy Pozzuto became only the fourth player in Kentucky high school history to reach 20 home runs in a single season when she belted a solo shot to left field to make it 5-2.

Grace Freeman got the Garrard seventh started with a single to the back of the infield, but Chadwell got the next two hitters out to move the Lady Lions to the brink of elimination.

“Hats off to (Garrard coach) Todd (Montgomery) and what he did with his kids. His kids didn’t quit, and we knew it was going to be a heck of a game tonight,” Deem said.

No. 8 hitter Kyla Bell reached based on an error that scored pinch-runner Priscilla Floyd, and No. 9 hitter Brynne Galloway walked. Fran Montgomery followed with a single to center field that scored Bell and moved Galloway to third, and Montgomery took second on a throw.

She stayed composed and confident. When we made that error in the seventh she could’ve dropped herself, but she stayed focused and got a fly ball to get us (the third) out and get us the win,” he said.

Boyle is the second straight team to win three straight 12th Region titles – East Jessamine did so in 2014-16.

“It’s special,” Deem said. “My kids have been here before, they’ve competed in this spot before. They understood what was going on, and they handled themselves like champions.”

By LARRY VAUGHT Contributing writer For anyone who has ever been around recent Centre College graduate Annie Rodenfels three things... read more