Question: Hi Jerry, what can you tell me about this beauty? It’s in just specular condition, not to brag or anything. I think the frame is original. It measures 3 feet 10 inches high by 3 feet wide. It’s one of my favorite pieces. I hope you can tell me something about it. Thank you.

Answer: Well, you said it there — It is a beauty. If there is one thing that is hot in the market today, its things that are bourbon related or bourbon themed. This piece has so much going for it. There are three things that push commercial advertising towards the top of desirability levels. They are babies, pretty ladies and dogs. You got that one down pat.

You have a tin lithographed piece of advertising art. It’s advertising Brookhill Whiskey and shows the “Brookhill Dog” poking his head through a fence. The original oil painting, that this was copied from, was painted by Alexander Pope. It’s thought that this lithographed piece was a gift to top retailers. It would have been proudly displayed on the back bar of a saloon or in some other prominent place. It was a fine piece then and now.

Brookhill was created by the syndicate Friedman, Keiler and Company. It was the brainchild of Joseph Friedman who was born in Louisville, Kentucky in 1857. Both of Friedman’s parents were of early Kentucky pioneer stock. 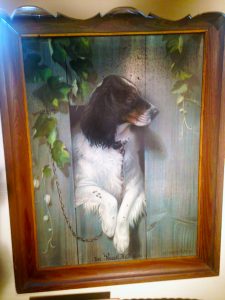 In a move to Paducah, in an attempt to establish his own business, he convinced his father to relocate there and open a business selling vinegar. He was fairly adept at it too. After the death of his father in 1886 and his marriage in the same year, Joseph decided to sell his business in 1890. His bride, Elizabeth Keiler, also of Paducah, was an accomplished and well educated lady for her time. In 1891 he joined forces with his brother-in-law, John Keiler.

John was already an established bourbon distiller and marketer. Thus Friedman, Keiler and Company was created.

Now the company owns several brands. But Brookhill was its flagship brand. Brookhill Bourbon also has a closer link to home. At one point, the company had only financial interests in — or as some would argue — it was distilled at a local distillery in Lancaster, Kentucky near the Dix River. On the morning of July 6, 1913 it was reported to the people of Paducah that Friedman had passed away while traveling to his summer home in Northern Michigan.

I have literally flown through reams of fascinating information on this prominent bourbon dynasty. Do a little research and you will discover a wonderful bourbon tale. It’s stunning how wealthy, knowledgeable and powerful those men were.

Back to your sign. This was a high time for advertising, and the invention of affordable color printing just made advertisers go mad. As time rolled on, many signs and other advertising things were sent to the trash heap, the damp basement or storage shed when no longer needed, or wanted. So to have yours in such great condition is amazing.

I found several comparable images and they are highly coveted and many prices reflect this. One major factor, other than condition, is the original frame. I think with the interest in bourbon and this stellar piece, in a proper venue, or between aggressive collectors, this framed dog picture would sell for about $1,800. If the trends in bourbon hold tight or expand, it could fetch higher than that. Thanks for sharing this great piece with us.

From our files, June 1

100 YEARS AGO — 1919 The City Council of Danville held a most interesting meeting. The street committee was authorized... read more