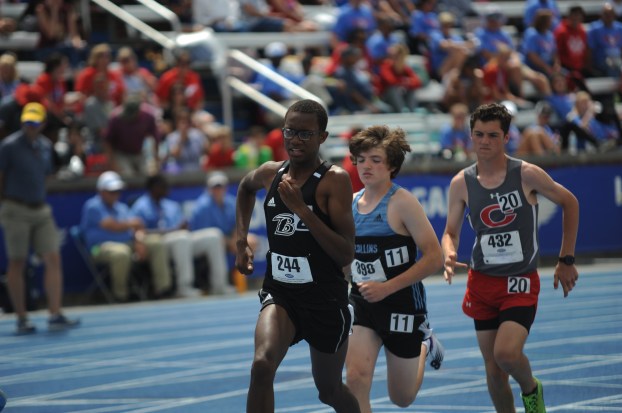 LEXINGTON— Heavy rain and thunder caused the final two events to be postponed for Friday’s KHSAA 2A State Meet, but Boyle County’s boys second consecutive title had already been clenched.

A 37 point gap between the Rebels and second place Paducah Tilghman cannot be overcome in a single event. So, regardless of how the rescheduled boys 4×400-meter relay plays out, it will be Boyle County holding the state championship. 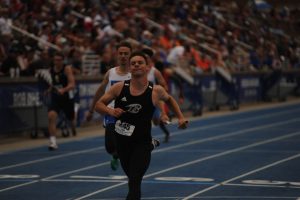 Led by individual winners Chris Duffy (100-meter and 200-meter), Jackson Cox (800-meter), and Ezekiel Harless (3200-meter), as well as a team win in the boys 4×100-meter relay, each earning 10 points, the Boyle team earned points in every race that it had a participant in. Marquise Kinley (third in triple jump and second in long jump), Ezarious Roller (third in discuss), Ethan Miller (seventh in pole vault), and Cameron Britton (eighth in high jump) also all earned points for the state champions.

Chris Duffy started the winning off by easily winning the 100-meter dash by over almost half a second, posting a similarly impressive mark in the 200-meter. Jackson Cox won his 800-meter race by over a second with a time of 1:57.07. Heading into the final turn, Cox was trailing, but over took the leader to claim the top spot. Ezekiel Harless’ time of 9:57.04 in the 2 mile was better than six seconds faster than second place. Upon realizing that he won, Harless smiled as he collapsed in exhaustion at the finish line.

The 4×100-meter relay team also cruised to victory, with anchor Ryan  Henry checking his back as he crossed the finish. The 4×400-relay team of Caleb Jackson, Cox, Duffy and Grayson Rahbany, which will run Saturday morning at 9:00 a.m., is the top seed in the event.

LEXINGTON — Led by a win in the 4×200-meter relay, and two medal finishes by senior Brennan McGuire, the Danville... read more