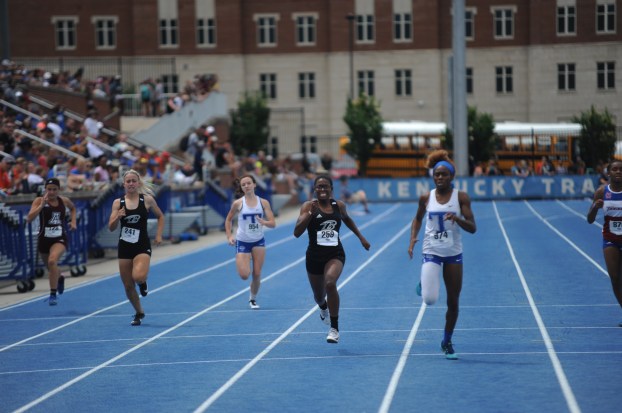 LEXINGTON—Editor’s Note: This story has been updated to reflect that Mercer County clinched the state title Friday afternoon.

During the first weather delay of Friday’s KHSAA 2A State Track and Field meet, Mercer County held a sizable 20-point lead over second place Boyle County. By the time the final weather delay caused the remaining two events to be postponed for Saturday morning, Boyle had cut the lead to a single point. But by the time the event was postponed to Saturday morning, a finalized triple-jump first-place finish for Mercer County’s Jasmine Claunch gave Mercer had a state title clinching 11-point lead. 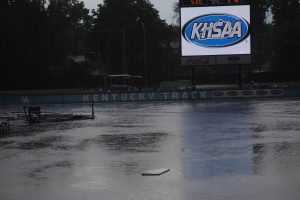 A view of the rain that postponed the final two events at the KHSAA State Track Meet. (Photo by Derek Brightwell)

A long storm, which had halted the 4×400-meter after the second heat, inevitably led the officials to announce that it will resume the event at 9:00 a.m. on Saturday morning.

After the first weather delay, senior pole vaulter Ashley Smith, disappointed with her own fifth-place finish, said that, while she felt they had been performing well as a team, Mercer may have an insurmountable lead.

But they were unable to overcome the Titans in the overall points. The win would have been the fourth straight for the Boyle County girls team. Ultimately, the Rebels finished as the state runners up, with 72 points. 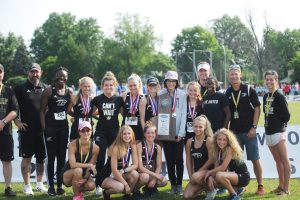 LEXINGTON— Heavy rain and thunder caused the final two events to be postponed for Friday’s KHSAA 2A State Meet, but... read more