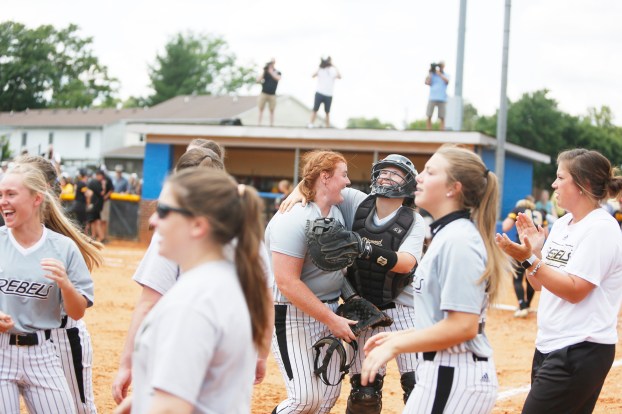 BEREA – It’s the state tournament, after all, so it didn’t figure to be easy. And Boyle County has become adept at dealing with the difficult.

The Rebels escaped trouble again and again Saturday in their semi-state game before beating Woodford County 3-2 to advance in the state softball tournament.

They were forced to fight to the final out for their third consecutive one-run victory, stranding the run that could have beaten them on base for the second time in as many games.

“My kids have been showing heart and character for the past two weeks,” Boyle coach Brian Deem said. “Everything has been a grind for them, and they responded to the challenge.”

The next challenge is a big one for Boyle (31-6). The Rebels, who have now won at least one game in each of their five appearances in the state tournament, have a rematch in the quarterfinals with undefeated Male at 7 p.m. Friday at the University of Kentucky in Lexington.

Male (36-0), which was ranked No. 1 in the preseason poll and in all nine regular-season polls by the Kentucky Softball Coaches Association, blanked Boyle 14-0 in the season opener March 20 in Louisville.

That was the first game in a challenging schedule that helped prepare Boyle for situations such as the one it faced Saturday in front of a standing-room only crowd at Berea College.

The Rebels survived one Woodford scoring threat after another after taking a 3-0 lead on five hits over the first two innings.

Woodford (30-6) had runners in scoring position in four of the last five innings. The Yellow Jackets outhit Boyle 11-5, but they left 10 runners on base.

Sometimes Woodford threats were snuffed out by a strikeout, other times by sound defensive play by a team that hasn’t committed an error in its run of one-run victories. 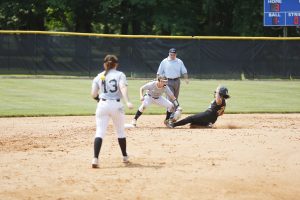 Boyle County second baseman Taylor Elliott tags out Woodford County’s Jocelynn Edwards on a stolen-base attempt as shortstop Hailey Cannon looks on during the third inning of the Rebels’ 3-2 victory over Woodford County on Saturday in a semi-state game. (Photo by Mike Marsee)

“I think we just have trust in each other, and none of us ever worry, because we know Katy Grace (Chadwell) is going to make her pitches and we’re going to make those amazing plays that we always do,” said Izzy Gervacio, who drove in two of Boyle’s runs, scored the other and made a couple of critical catches in center field. “We always have each other’s backs.”

And they always seem to be prepared to make plays.

“We rep them to death on just making routine plays – backhand, forehand, straight at ’em, short hops – and I think the big thing is it’s been ingrained in them,” Deem said. “When we have our OTAs, when we get out there in January, we just constantly (drill) them on glove action and footwork, and that way when it gets to late May it’s second nature. It’s second nature because our kids are moving their feet well, and they’re being able to put themselves in position to make plays and make throws.”

As was the case three days earlier in the regional final, the final play was made by left fielder Kelsea Hinkle, who caught a fly ball off the bat of Woodford’s Claire Lehmkuhler to strand the tying run at second base and the go-ahead run at first following consecutive singles that produced one run with two outs in the seventh inning.

“It’s just really exciting, but I never doubted us. I knew we were going to come home with it,” Gervacio said.

Woodford left two runners on base in the third, sixth and seventh innings and left the bases loaded in the fourth when Chadwell got a groundout and a strikeout after allowing three hits.

Chadwell had only four strikeouts, but with the exception of a sixth-inning double by Lehmkuhler that went to the left-field fence, every hit she allowed was a single, and most of them weren’t hit all that hard.

Deem said it was important for Boyle to give its pitcher an early lead.

“I said if we could get a big hit and put some runs on the board, I felt the way Katy was throwing she could keep them off balance, and she did,” he said. “Katy hit her spots and her offspeed was nice, so we were able to keep them off their toes and not allow them to drive anything.”

Chadwell helped herself by driving in Boyle’s first run with a single to center field after Gervacio led off the first inning with a walk and moved to second on an error.

The Rebels opened the second inning with consecutive singles by Emily Glasscock, Madison Baker and Hinkle. One out later, Gervacio lobbed a single between the third baseman and the left fielder that drove home pinch-runner Stella Johnson and Baker to make it 3-0. 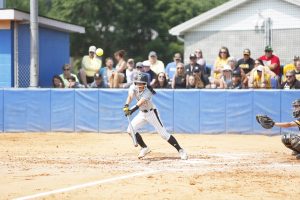 Izzy Gervacio of Boyle County connects for a two-run single during the second inning of the Rebels’ 3-2 victory over Woodford County on Saturday semi-state game. (Photo by Mike Marsee)

Keely Bowling led off the third inning with a single for Boyle but was thrown out trying to stretch it to a double, and the Rebels didn’t get another hit and had only one more baserunner.

Still they survived, winning one more big game before a standing-room only crowd.

“I was really pleased with how we handled the excitement today, how we handled an 11th Region team,” Deem said. “I’m proud of my kids, and they should be proud of themselves.”

The stage only gets bigger from here. Boyle moves from a small venue at Berea College to the sparkling John Cropp Stadium at UK, which can accommodate more than 2,100 fans. John Cropp Stadium is hosting the championship for the first time; the final three rounds in the new single-elimination format will be played Friday through Sunday.

“It’s so special,” Gervacio said. “All of us were talking about how bad we wanted it, and all of us were like, ‘We’re definitely going to UK.’ We had the mindset that we were going to UK, and we finally made it happen.”

Male, Boyle’s quarterfinal opponent, punched its ticket to Lexington with a 9-0 win over Oldham County on Saturday. The Bulldogs have outscored their five postseason opponents 42-0 and have 15 shutout wins this season.

“It doesn’t matter at this point. Everybody’s good, everybody’s solid. Everybody’s going to have pitching, everyone can hit and play defense,” Deem said. “It’s going to be an experience and a memory for these kids that they’ll never forget, and we’re going to be ready to go and give it our best shot and just try to stay the course.”

LEXINGTON— Heading into the final event for the girls state championship, which was postponed to Saturday morning, Mercy County already... read more