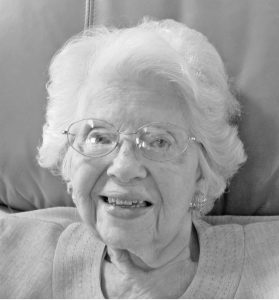 Donna Jean Smith, 93, of Danville, KY, formerly of Crestline, OH, passed away on May 30 in Danville. She was born on September 19, 1925, in Marion, OH, to the late Arthur and Jeanette Watt. She was preceded in death by her husband, Paul Harrison Smith.

Donna worked for many years as a bookkeeper, first at the McMillen Feed Mills in Marion, and subsequently at the Crestline Equity in Crestline. She also volunteered at the Crestline Memorial Hospital and at the Voting Polls in Crestline. Donna was a devout Christian. She was an active member of the First Presbyterian Church in Crestline where she served as an Elder, taught Sunday School, sang in the choir and served on numerous committees. She was also a member of the Order of Eastern Star, Warpole Chapter #366.

Along with her parents and husband, Donna was preceded in death by her brothers, Arthur L. Watt, Charles L. Watt, James B. Watt and Ted A. Watt, all of Marion, and by her grandson, Craig Yochem of Crestline.

Donna was a wonderful cook and an avid reader. She loved her Lord and her family and took great joy in playing games with her grandchildren. Her gentle spirit will be missed by all who knew her. Her family is extremely grateful to the staff who cared for her at McDowell Place.

Funeral services will be at 12 pm, Tuesday at Centenary United Methodist Church in Danville. Visitation will be Tuesday from 10 am-12 pm at Centenary. An additional visitation will be from 10 am-12 pm, Wednesday at the Mark A. Schneider Funeral Home in Crestline. Burial will follow at the Crawford County Memory Gardens in Crestline. In lieu of flowers, the family requests that donations be made to St. Jude’s Children’s Research Hospital in Memphis, TN, Disabled American Veterans or the charity of your choice. A guestbook is available at www.wlpruitt.com.