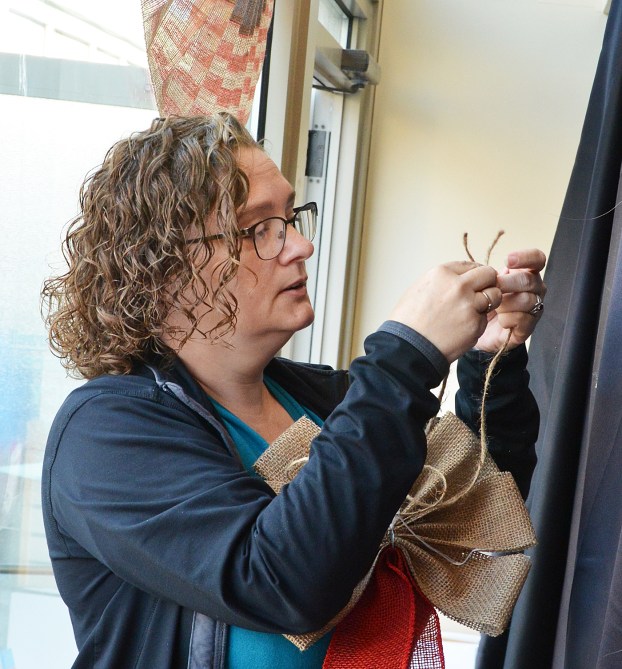 Alison Kidd is an inventory specialist for MedSource but periodically steps out of the office to decorate the business front window. (Photo by Robin Hart)

In a storefront window on Third Street, jellyfish appear to be floating in the ocean alongside smiling fish that are swimming among the colorful coral. If you look closely, you’ll see a happy shark has taken a bite out of foam boogie board.

A larger display window just a few feet down the busy street is decorated in an “Americana” theme to help celebrate the upcoming Great American Brass Band Festival and the 4th of July holiday.

The windows belong to Ephraim McDowell MedSource and are decorated by employees Alison Kidd and Bethany Abbott to help celebrate holidays and the change of seasons. 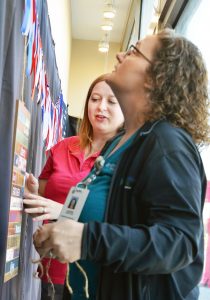 Kidd is inventory specialist for MedSource’s four stores and its warehouse. Abbott is a specialist who documents authorizations for medical equipment and oxygen supplies.

But periodically, the women take time out of their demanding office jobs to create fun and fanciful scenes in the windows for the public to enjoy.

The windows once displayed medical equipment, mannequins and clothing. But now, “it’s fun stuff,” she said smiling. “We try to make it fun.”

The women especially like the Nativity scene they’ve installed for the past few Christmases. They may have to start working on ideas and supplies for a new one since the Nativity they’ve been using has started to fade, Abbott said.

Abbott and Kidd said they usually transform the window displays in the morning before it gets hot. When the afternoon sun starts shining into the windows, the long and narrow space feels like an oven the women said.

With only about two feet wide of working space, Abbott and Kidd have to plan where to place items before climbing into the area, they said.

The women get their ideas and inspiration from Pinterest, they said. For example, Pinterest showed them how to create the jellyfish using a plastic shower cap over a clear bowl with crinkled ribbons as its tentacles.

They also get most of their decorating items from local discount stores. “We love Dollar Tree,” Abbott said. The women also keep and reuse items whenever possible. Boxes of decorations are stacked and stored just for their windows, they said.

Passers-by seem to love their window displays too. Abbott said several times people walking by have tapped on the windows while they’re working and given them a “thumbs up.” They’ve also startled the women a few times, they said laughing. If they’re concentrating on the project, they don’t always notice that someone is standing there watching them.

Bethany Abbott stands on tippy toes as she stretches to hand a sign at just the right height Monday morning. (Photo by Robin Hart)

Alison Kidds looks back to her co-worker as she stretches to hang a bow at just the level. (Photo by Robin Hart)

Bethany Abbot crouches down as she steps up into the 2-foot wide window display area before hanging a new sign. (Photo by Robin Hart)

Alison Kidds hangs a patriotic sign in the MedSource window on Monday morning.

Alison Kidd, inventory specialist for McDowell Health MedSource, gives a thumbs up to Bethany Abbott who was placing a cross inside their window display on Third Street Monday morning. (Photo by Robin Hart)
You Might Like

All types of paper are still being accepted at the Boyle County Recycle Center despite the recent decline in companies... read more