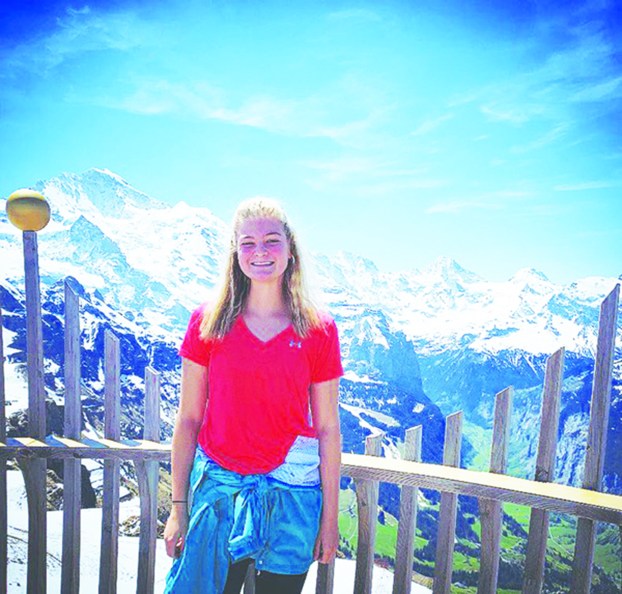 Emma Davis gets a mental break in Switzerland after a freshman year full of adjustments. (Photo submitted)

Challenging and rewarding are words that Emma Davis used to describe her freshman season at Tennessee-Martin.

Her team finished 23-9 overall and lost to Belmont in the Ohio Valley Conference Tournament championship game to just miss a berth in the NCAA Tournament. Still, it was a different type of season for Davis after winning consecutive state titles at Mercer County her final two seasons and being part of one of the state’s best teams for four straight years.

“This first year was really challenging until about Christmas because I was trying to adjust to the speed of the game and get the hang of everything basketball-wise and trying to manage my classes and going out of town for basketball and making up work,” said Davis. “It was a little chaotic.

“The second semester, I was good to go and it was a lot better. Going to the (OVC) championship was awesome. We didn’t win but it was an eye-opening experience about what we needed to do to get to the next level.”

Davis also had to adjust to not being on the “top dog” team. Her last three years at Mercer she often sensed that “people were scared to play us and would just walk in the building and know they were about to get murdered.” However, Mercer also played enough elite competition to have her ready for Division I play.

Mercer’s four other seniors off those state championship teams — Miss Basketball Seygan Robins (Louisville), Emmy Souder (Northern Kentucky) and twins Lexi and Faith Lake (Campbellsville) — all also signed basketball scholarships. Tennessee-Martin even had a game at Louisville, one of the nation’s top teams, and lost 102-62.

“That was different. I was not used to losing like that but it helped me get the hang of what an even higher level of play would be like,” Davis said.

She had to adjust to playing without her four long-time teammates this season and that was not easy, especially early in the season when she had to try and figure out her role on a new team.

Davis became a full-time shooting guard and had to become more of a ballhandler than in high school when she knew Robins could always bring the ball into the offensive court.

“In college everybody plays at a higher level. Maybe the point guard gets locked down, then I need to dribble the ball up. That’s just part of college basketball. Everybody needs ball handling skills and I am working hard on that,” Davis said.

She also wants to be in better physical shape for her sophomore season, a point coach Kevin McMillan has driven home. She had mononucleosis last season as well as a flu-like virus in addition to rolling her ankle. If that wasn’t enough, a death in the family also occurred during the season.

“It seemed like every time I would get healthy, then something else would happen,” Davis said.

That’s why on a May vacation trip to Europe, she had a full “body workout” she did nightly along with sit-ups and pushups. She also ran each morning to make sure she was ready for summer workouts that started this week at Tennessee-Martin.

Davis has also worked on becoming a more consistent 3-point shooter along with developing a better mid-range jump shot to enhance her offensive capabilities.

Davis got a needed “mental break” from basketball during her time overseas with her two cousins and aunt, who works overseas. They toured Germany, France and Switzerland. Davis found out some of the European cheese is “gross” and that cologne really was invented in Cologne, Germany.

“It was amazing to have my aunt help make each country unique. We went to Paris and Strasbourg where the artwork on each house was so pretty. Each house in Strasbourg was a different color. We then finished up in Switzerland. I really liked the chocolate in Switzerland and even brought some home. I would live there if I could. It’s expensive but was so nice,” Davis, who got back from Europe on her 19th birthday, said.

She’s back in Tennessee now but admits she stays in touch with her former Mercer teammates — often in a group text — and still thinks about their magical high school careers. When a video from their senior state championship win popped up on Facebook recently, she realized how much that had impacted her life.

“In five to 10 years I know it will impact me even more,” Davis said. “It made me tear up just watching the video. Those were my best friends and we did it together before all going on to new chapters in life and we are all succeeding at the college level.

“It’s great to see all five of us playing another year of basketball and that we all made it to the next level. It just shows how dedicated we all are and as time goes on, we are going to realize what we did was even more special than we ever realized it was.”

The March 20 match-up between Boyle County and Male was the beginning of the season for both teams. Their rematch,... read more