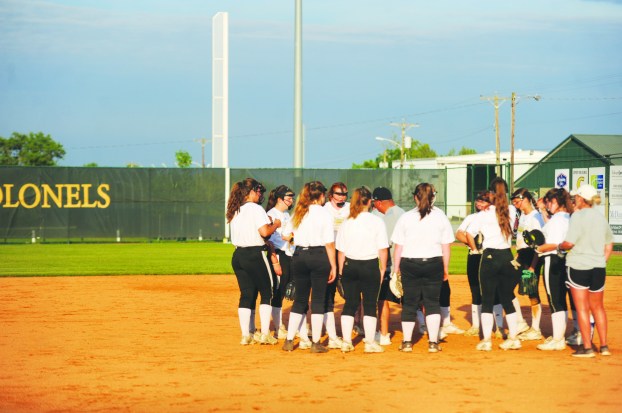 The March 20 match-up between Boyle County and Male was the beginning of the season for both teams. Their rematch, this Friday in the State Tournament being held at the University of Kentucky’s John Cropp Stadium, will be the end of only one team’s year.

The first game went decidedly in favor of Male, which has been the number one team in the state throughout the entire season according to the Kentucky Softball Coaches Association. The game ended in five innings, with the Lady Bulldogs winning 14-0 and holding the Rebels to only one hit. 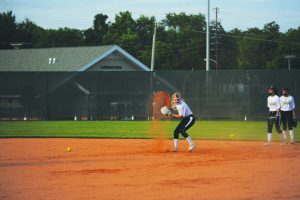 The theme of the infield drills was attacking the ball and making the right play. (Photo by Derek Brightwell)

“I think you can throw the game out,” Male coach Josh Bloomer said of the first match-up. “There’s little things that people don’t even think about. Like, Boyle’s got to get a bus. They come in, they don’t get their full warm-ups. They’re hitting wiffle balls…So I think it’s just an anomaly, and I told (Boyle County coach) Brian (Deem) that. Just an anomaly.”

Coach Deem agrees with that assessment.

“I think both teams are a lot different,” he said. “They’re more mature…We’ve grown, they’ve grown. It’s postseason, anything can happen. That’s what I keep reminding my kids. We got to go out there and compete. We can’t be awestruck by who we’re playing, or what’s going on. Just focus on doing what we do and see how things play out from there.”

Who they are playing is a team that has dominated opponents all season long. Male enters this game with a record of 36-0, with 15 of those wins being stopped early. It scored double digit runs in 19 of its wins and has never allowed more than five runs in a game, including 16 shutouts. It has not allowed a run since May 18, and has won all but four of its games by three runs or more.

Bloomer knows what his team’s reputation is.

“I mean, we’re good,” he said. “There’s truth to the fact that I coach a very talented group of young ladies. Who have bought into what we ask them to do. They sacrifice for the team.”

Deem also is aware of the challenge, but is keeping his players worrying about getting better.

“Right now, we’re just focusing on ourselves” he said as his team runs an infield drill in practice. “I can’t focus on what he’s got on his side, who his players are. We’re going to focus on ourselves, worry about us getting better. If we do that, I think we’re going to give ourselves a chance to go out and compete and challenge.

“I don’t think, you know, that we’re going to stop them,” he added about the challenge the Lady Bulldogs’ offense presents. “I don’t care how good our defense is or how good our pitching is, I don’t see us going out there and shutting a team like that out. What we got to do is limit baserunners. We got to make sure we don’t give kids free passes with walks or errors. If we don’t give them four or five out innings, we’re going to put ourselves in position to make some plays. If we just keep to the routine plays and make routine outs, we’re going to be in good shape.”

With Boyle County ranked sixth in the state by the KSCA, this match-up is, by team rankings, the closest in the first round of the state tournament. It is the only game featuring two top ten teams. Coach Bloomer knows that it is as tough a draw from his team as it is for the Rebels. 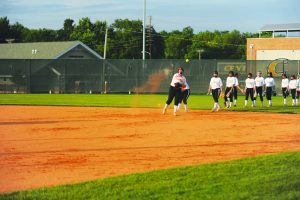 Pitcher Katy Grace Chadwell throwing to first during infield drills on Tuesday. She will be on the mound Friday as Boyle looks to upset top ranked Male. (Photo by Derek Brightwell)

“I had them ranked as high as fourth this year in the season,” he said of the Boyle County program. “I have a lot of respect for what they do, what Brian does, for his kids and the work they put in…They have our full attention.”

If the depth of Male is its strength, Boomer feels it balance and toughness that makes the Rebels special.

“I think they just do a little bit of everything,” he said. “I think Katy’s (Grace Chadwell) a great pitcher; I think she’s one of the top pitchers in the state. She moves the ball vertically. A lot of pitchers today try to spin it horizontally, and they move it left to right, but she moves it up and down and she has a good change-up. She’s going to require you to be patient.

“They’re aggressive, they play a fast paced game,” he added. “They’re not scared to lose, is I think one of the bigger things. I think a lot of teams play scared to lose, and I don’t know that they do that. I know Brian does a really good job with them. I know he’s going to have them ready to compete.

“I can assure you that they will have our full attention,” Boomer reiterated. “We’re locked in mentally. If things don’t go our way, it won’t be because we weren’t prepared to play. It’ll be because Boyle beat us.”

The new, single-elimination format of the tournament adds an unpredictability this year that did not exist in previous years. The win-or-go-home stakes have both teams locked in to the match-up on Friday, not looking ahead.

“Everybody else can say all the things they want about, you know, our record or how we’re going to do this weekend,” Male coach Bloomer said. “But in the end, it’s a game and the game has no clue who’s supposed to win. It’s just whoever goes out and performs for those seven innings. We know we’re going to have a tough one. We’re going to compete for 21 outs.”

The Rebels feel prepared for the pressure of this moment. Their previous three games have all been decided by one run, with the regional championship and the semi-state game coming down to situations in the seventh with the winning or tying run on base with two outs. It is this experience that, Deem hopes, will settle his team down if things get tight on Friday.

“We’re mentally tougher,” he remarked on his team. “I told them going into the Woodford game in the seventh inning, I said ‘We’ve had three or four games like this in the last two or three weeks. You’ve been here. You know how to find a way to win’…I told Katy ‘Hit your spots and let your girls behind you take care of it’ and we did and were able to get out of it with a win. 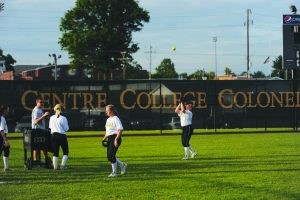 The outfielders and infielders were sectioned off doing positional drills at Tuesday’s practice. Coach Brian Deem is stressing making the fundamental plays heading into the state match-up with Male. (Photo by Derek Brightwell)

“So, facing the competition we’ve had to face this year and going through those grinds, it has helped us to be able to mature and trust each other,” he added. “My kids are having fun, they’re playing at 100 percent. They’re excited for this opportunity. So we’re going to go out there and make the most of it.”

After winning the 12th Region Championship, Deem said that he had scheduled a tough regular season to prepare his team for the postseason. He thinks it has worked.

“I definitely do (think our schedule prepared us for this),” he said. “To realize the regional championship we played a team out of our district. The first round of the state tournament, we played Woodford, who we had played before. Now we got Male and we opened the season with them. And they really did a number on us.”

This is not only a rematch from the first game of the season, it is a match-up between two coaches who are friends. In addition, Male coach Josh Bloomer provides lessons for some Boyle County players in the winter, according to one parent. So there is a familiarity between these programs that doesn’t usually exist between schools in different regions.

“Josh and I are really good friends, we talk quite a bit,” Brian Deem said of the relationship. “He’s helped me grow as a coach and taught me some things that are a much higher level that we’ve been able to incorporate with our kids. I’m really grateful for the working relationship as well as the friendship with him.”

Ultimately, it is the bond that his team has made over the course of the season that gives Deem the most confidence heading into this weekend.

“This team right now has got great chemistry,” he said as his players go into the dugout at Centre College’s softball field. “They’ve been doing a lot of things together. They’re very unselfish. They love each other. When you can love each other and play for each other, you’re going to do great things.”